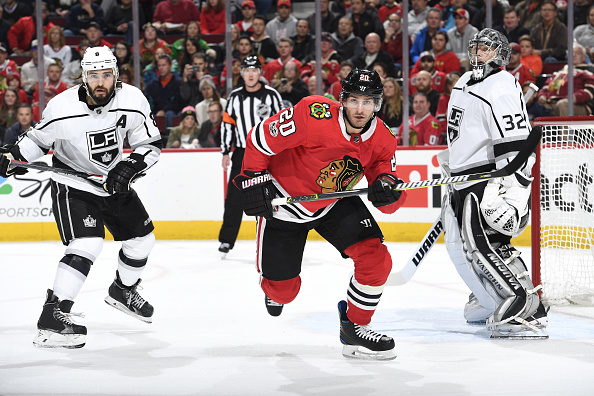 On Anze Kopitar’s game and what’s different about this year than previous seasons:
I just think it’s his career. When you look at (Kopitar) the year he won the Selke, just the way that he’s developed as a player, and it’s not just this year, last year he had a really off year for a lot of reasons that everybody has their opinion on but he is the player this year that I think we’ve all come to love. He’s a guy that leads your team in offense, but he’s your best defensive player. I think winning programs have people like that. Toews is a lot like that here. Bergeron’s like that in Boston. Their best offensive players are their most committed defensive players. That’s a special breed in an athlete. With (Kopitar), he leads but example, he has a great relationship of respect with his teammates and the coaches. He’s got detail in his game all the time. He’s blessed with great size and he’s got a really good motor in terms of his compete, so it’s not surprising that he’s a consistent player because he prepares himself well. He prepares the right way and he always makes sure that he wants to try to be the best player. But that’s not unique to this year. I think if you look at the course of his career and the success that the Kings have had, you can have a lot of these conversations that describe him the same way.

On what the atmosphere was like in Chicago in the playoffs in 2013 and 2014 when the teams played in the Western Conference Final:
Amazing. I can remember walking out with the crowd buzzing and especially the playoff series and you look on the ice and you got Kopitar and Brown on one side and Doughty and Quick and then on the other side you got Toews and Kane and Keith and Seabrook and Crawford on the other side, so it was just a lot of great players that were great competitors at key times and it was almost like a heavyweight bout where you went after each other and was shot-for-shot. They were great games to be a part of and just it was kind of fun to watch great players go at it and be excited for the pressure of the moment and not be nervous about it and you could see some great performances. That seven-game series in ’14 was unreal and we were fortunate to come out on the winning side of it. The year before we didn’t but they are some of the most memorable games of my time in the league.

On the desperation in this game for both teams:
I think everybody desperately needs the points. We’re out of a playoff spot. They’re trying to get back in a playoff spot. I’m not sure there’s a team in the league that’s not playing with a lot of desperation right now knowing that the enormity of the situation with games winding down and either trying to jockey for position or make sure you’re getting in, so I don’t think that’s changed. Obviously there’s a lot of pride on both sides here that understand the importance of the game today.

On handling the back-to-back with Winnipeg tomorrow:
We don’t worry about anything but today. You start looking at the schedule and it’s a problem, right? We have a 60-minute hockey game today that we need to win. And we need to take care of today.

On scoreboard watching between the Wild Card and the Pacific Division and whether he keeps an eye on both races:
I think it’s hard not to but the thing we’ve talked to our group about is the most important team to watch is the LA Kings. If we don’t take care of our own business, if we don’t get points on the board – everybody’s playing each other so somebody’s getting points. You’re not getting in with 67 points so you have to take care of your own points. Everyone watches what’s going on around them because it affects your positioning but at the end of the day we’ve really tried to focus on ourselves because we need to take care of our own backyard.

On the play of Andy Andreoff’s line:
I think that line has been good for us. They’ve given us really quality minutes. I think their team game has been really good. There’s been games on this trip where they’ve kind of gotten some momentum back for us whether they get pucks deep, establish the forecheck and then we do expect them to chip in with some secondary offense. If you look at the guys on that line, they’ve all scored at lower levels. The big challenge in the National Hockey League is coming up and earning the trust of the staff and being really responsible but trying to be the player you were before you came here and Michael Amadio has scored 50 goals in the OHL. Brodzinski scored 20 goals three straight years in college, Andy’s put up numbers both in the American League and junior hockey so it seems like they have different elements on that line but they seem to work well together and I think they’ve given us some good momentum that allows our team to play with pace when you can play four lines.

On Andreoff’s play specifically:
Especially as of late he just seems to have the confidence to make plays but he’s skating better, his pace has gotten better, I think the detail is better in his game but he has made some plays offensively that are more than just a first-option play. I actually think he’s had some really good scoring opportunities that he hasn’t capitalized and I think he can. But he’s getting himself in the right spots and creating the right chances from playing the game the right way, which is great to see.

On Michael Amadio’s emergence:
Probably the first time you saw it was in the Rangers game. We were on our heels a little bit there and we put him in a situation on the power play where he really took advantage of it. He showed a lot of composure and the way teams pressure at this level I though he showed a lot of composure and compete in his game. He has an ability to take a puck with minimal space and have some composure with it and I think the goal he scored, the second goal he scored the other night, he was able to over-skate a puck and change direction and it looked like a goal scorer’s goal. But again I think with him we’ve been – I don’t want to say surprised, but we’ve been pleased with how responsible he is without the puck and how responsible he is in his own zone and I think that’s just going to build his trust and build his minutes as we move along.