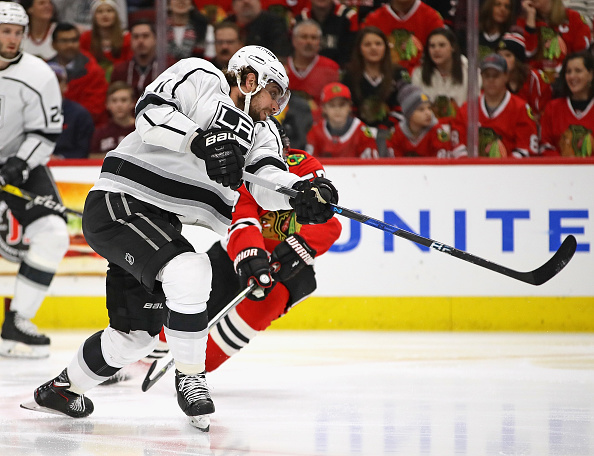 On the strong start of the game:
I think the last two games they ways we’ve started the hockey games have been the difference in the hockey game and the challenge for us is to play that way for 60 minutes. Chicago really put a push on there at the end and I just thought we got off our gameplan a little bit but if you can start hockey games – at times this year it has been a concern. You get down a goal, especially on the road, and you start chasing the game so I thought we’ve been able to really get contributions and wave after wave of lines getting good shifts in there and then getting some production again from the Amadio line, I thought it was big for us.

On Jonathan Quick’s play:
I thought (Quick) was great tonight. It wasn’t just late. I thought he was great all night. Really played with a lot of poise, made big saves at big times and was really (inaudible) in the third period, so he was a big reason we won tonight.

On getting off to better starts the last couple of games:
We’ve talked about preparation all year and to be honest with you, there have been games where we’ve had great starts. You look at the Pittsburgh game at home – one of the best periods we’ve played all year and we end up being down in the hockey game, so sometimes the score doesn’t always tell you the story. Sometimes you get behind in hockey games and you do everything right but you still end up behind. I think the one thing this group has done a good job of this year is if things don’t go according to script in a hockey game they don’t let one event dictate the outcome of a hockey game. They have a way of putting it behind them and that’s a big reason why we’ve come back in a lot of games this year, but certainly playing ahead, getting off to a good start is going to increase your chances of winning than it is playing from behind.

On how not taking as many penalties has helped the team:
You’re right and Chicago has the most power play opportunities in the National Hockey League. I thought the fact that we were skating and we had good checking detail especially early didn’t put us in situations where we had to take penalties. I thought the power play scored a big goal for us. Didn’t think the power play was very good in the third period and that’s something I think we’d like to get momentum out of the power play, penalty killing but big kill in the third period, big kills the other night in Buffalo so certainly a step in the right direction.

On how Phaneuf and Alec Martinez have played as a pair:
They’re two veteran guys that have a lot of experience in the league. (Martinez) is really comfortable on the right. Dion talks a lot on the ice. I think when you have a partner that talks a lot on the ice, it really makes it easier, so we thought the pair might work and they’ve been good in the early going.

On managing the game when the Blackhawks pulled their goaltender near the end:
Well, we actually had lots of guys involved there. I think Thompson and Mitchell give us veteran guys that are really good in those situations. I think Tanner and Tyler are really good in those situations. I think Andreoff did a great job blocking a couple of shots there so we’re not going to rely on just a couple of guys. I think everyone needs to be able to dig in and get the job done in those situations but certainly I thought Thompson and Mitchell, their play on the penalty kill has really helped us here as of late.

On the play of Tyler Toffoli in the first period and his chances despite not scoring:
I think Ty’s game is trending in the right direction, both he and Tanner I think. He ripped one off the crossbar, a post early in the hockey game. He had some good chances. They had some odd rushes where Chicago guys laid down and kind of busted them up, so he’s getting in all the right spots. I like his game and his detail in his game right now. I think if he just keeps playing that way, the results are going to be there.