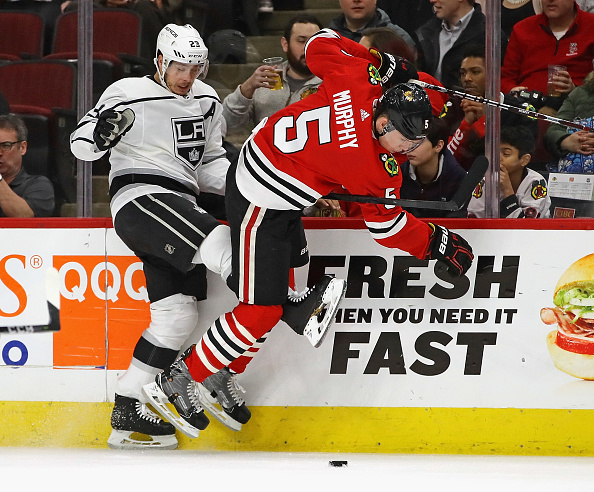 – The Kings improved to 14-13-4 against the Western Conference and 6-4-1 against the Central Division.

– The Kings improved to 3-3-0 on their seven-game road-trip. They finish the trip Tuesday at the Winnipeg Jets.

– Goaltender Jonathan Quick stopped 27 shots on goal Monday. In his last six games, Quick has compiled a .936 save percentage, stopping 160 of 171 shots on goal. All these games have been part of the Kings’ seven-game road-trip.

– Defenseman Dion Phaneuf scored his second goal with the Kings. Phaneuf also played 21:51 in the game, his third since a trade to Los Angeles from the Ottawa Senators. He has five goals total on the season in 56 games played.

– Defenseman Alec Martinez assisted on Phaneuf’s goal, which came on the power play. Martinez has nine power play points, which is tied for fourth-most on the team. His eight power play assists rank third on the Kings.

– Forward Nate Thompson notched his first point with the Kings following the trade from Ottawa, an assist on forward Torrey Mitchell’s first period goal. Thompson also played 15:21 and went 7-for-16 on faceoffs.

– Forward Andy Andreoff’s goal was his fifth point in his last six games. He has one goal and four assists over that stretch.

– Mitchell’s goal was his second of this road-trip. He also scored a goal at the Carolina Hurricanes. Mitchell went 3-for-4 on faceoffs against Chicago.

– Forward Michael Amadio notched an assist. He has three points in his last two games. It’s the first time in his NHL career he has notched points in back-to-back games.

– Forward Kyle Clifford notched an assist and has four points in his last seven games – two goals and two assists.

– Forward Jonny Brodzinski notched an assist and has points in back-to-back games. He has four points in his last six games.

– A total of nine Kings players made the score-sheet in their game at the Blackhawks.

– Patrick Sharp’s goal was his 22nd in his career against the Kings.

– The Kings will play Tuesday at the Jets. They are not scheduled to skate the morning before the game.