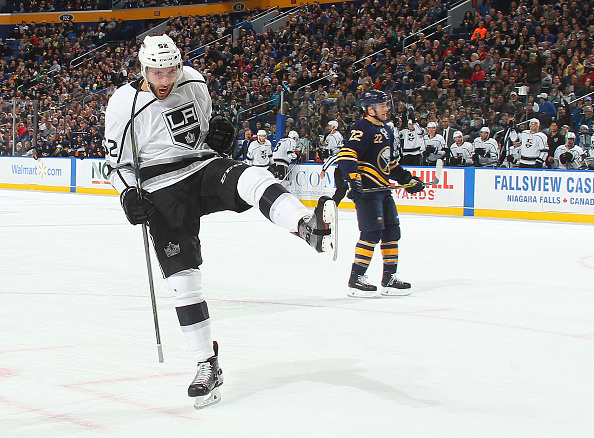 Below are quotes from Kings Coach John Stevens after the Kings practice at United Center in Chicago in advance of their game tomorrow at the Chicago Blackhawks. Most of the team did an off-ice workout.

On if the team accomplished what it set out to do against the Buffalo Sabres on Saturday, despite struggling in the third period:
We played the game the right way for 40 minutes and the wrong way for 20. You can talk about it any way you want it. We did some really good things and managed the puck really well, they come out and put a push on and we turn pucks over and spend too much time in our zone. The challenge for us is to play that way for 60 minutes. The start of the hockey game was the difference for us. I thought the penalty kill took a big step. I didn’t think the power play was very good and (Quick) was strong in the net. There’s lots of things to like but there’s lots of things to improve on.

On Anze Kopitar not getting enough credit nationally for his strong season:
He gets enough credit from the people that know him and the people that matter. I think if you don’t even go by us, the coaches and his teammates, you see the respect he gets around the league and the players that play against him I think it speaks volumes about how well-respected he is in the league maybe in terms of the fanbase of the teams in the East because the games are on late a lot they don’t get to see him play a lot but it doesn’t matter who we’re playing. I think he has a tremendous amount of respect in the league because of how good he is and how respectful he is of the game, the league and how he plays.

On not skating Sunday and if that has to do with the upcoming schedule:
If you look at the schedule, and not just the back-to-back, the schedule before us and the schedule after us – our group has shown an ability to handle preparation without the physical activity in terms of being on the ice and I think it’s going to be important. This group has learned to really use the morning skate as a preparation tool to get their touches in and firm up the execution. They’ve really responded tremendously to it but even on a day like today some of our young guys went on the ice just to keep their execution sharp. I just thought it was – met with our staff, talked with the training staff and thought it was a really important day for rest and recovery and have energy to play. We have a back-to-back with Chicago and Winnipeg and then we have a day in between, go home and play Dallas, day in between and play again and have another back-to-back next weekend. There’s not a whole lot of ‘let-up’ in the schedule so we think it’s important that the guys — sometimes preparation is mental, sometimes preparation is physical and the whole key is to try to tie it all together so today becomes an important day.

On playing more games against Western Conference teams the rest of the schedule and why they’ve had more success against the Eastern Conference this season:
I’m not sure what to make of it. We had a lot of Eastern games early. So that means it might be just point in the season, lineup, injuries, your team plays well at different points during the year when everyone’s trying to get their team righted. There is a little bit of a different style of play I think (in the two conferences). The East really seems to generate a lot off the rush. I think the West tends to maybe clog things up a little bit, seems to be a little maybe more zone. I’m not sure if that’s accurate but it feels that way. Certainly in the Pacific there’s big teams and big, heavy games in a lot of the games but I think we’re capable of having success in both. We’re trying to make strides in our team game. We’ve certainly changed the look of our team a fair bit with guys going out and guys coming in and new guys coming. We think with our team game getting in order we can handle and have success with teams in the West just like we did with teams in the East.

On if their newer additions can help in games against the Western Conference:
I think they can help our team game, period. Dion’s familiar with the West, played here lots. (Thompson’s) played in the West lots. (Mitchell) has been in the West. Those guys have all had some experience in the West. (Lewis) going out hurts a little bit but I think he’s rounding the corner so we’re hopeful we get him back soon and Jeff Carter is still on the horizon there where he’s coming back, so if we can just get our foot back in the fight here and get a foothold back in a playoff spot, I think when we add those guys it’ll only continue to enhance our ability to have success against the West.