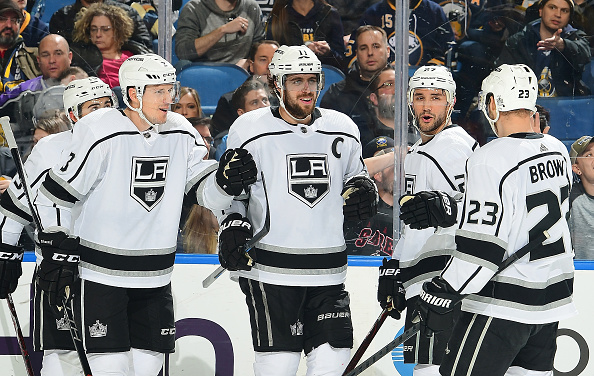 The Kings held a mostly off-ice workout at United Center on Sunday in advance of their Monday game at the Chicago Blackhawks.

The next week is going to be tough for the Kings with a back-to-back in Chicago and Winnipeg, followed by a long flight back to Los Angeles and then one day off in between their return and a game against the Dallas Stars. The Kings then have another home game, against the Edmonton Oilers, and then a home-and-home, back-to-back with the Vegas Golden Knights.

Because of the hectic nature of the team’s upcoming slate, the coaching staff felt it was crucial to not push the team too hard today.

“(We) thought it was a really important day for rest and recovery,” Coach John Stevens said.

Though the Kings beat the Buffalo Sabres 4-2 on Saturday, the team wasn’t thrilled with its third period, where Los Angeles allowed two goals. They understand that moving forward in similar situations they have to finish off games, rather than letting teams back into them.

“Everyone is so tight and teams are so good that you can’t sit back,” defenseman Alec Martinez said. “I think throughout the season, storylines are going to change and games are going to be different but I think you have to learn from those games. You have to learn from your mistakes and get better and we’re a better team now than we were two games ago and hopefully after tomorrow’s game we’ll be a better team than we were today.”

– Captain Anze Kopitar has found himself in a bit of a back-and-forth with Kings mascot Bailey, on how Slovenia’s men’s hockey team beat Team USA in the Olympics.

Kopitar first tweeted his congratulations to Slovenia after they beat Team USA, 3-2 in overtime on Feb. 14.

He then responded to a tweet by NHL on NBC host Kathryn Tappen, to which Bailey then tweeted back at Kopitar.

Kopitar then ribbed Bailey later in the day with a tweet of Slovenia celebrating in the game.

They continued to spar …

U asked and I had to be clear…

The most recent back-and-forth between Kopitar and Bailey was yesterday.

“Well I started it,” Kopitar joked when asked about his online ‘beef’ with Bailey. “But I don’t think it would be any different if the US won. I’m pretty sure I would have heard about it. It’s all fair game.”

Kopitar pointed out that he enjoyed showing his sense of humor to fans on Twitter with Bailey.

“Maybe players sometimes you get caught up in all the serious stuff so you don’t see that side of us too often but sometimes it’s nice just to kind of let loose and have some fun with it,” he said.

On Bailey’s last tweet noting how well Slovenia was doing without Kopitar, the forward pointed out that the mascot may have been right.

“Sometimes you just have to pull yourself out to make them better,” he joked.

– In his conversation with reporters today, Kopitar noted that he understood the struggles that Tyler Toffoli and Tanner Pearson were dealing with because he had similar issues scoring goals last year when he had 12. That was his lowest full-season total of his NHL career. This year Kopitar has 23 goals in 58 games and his 0.40 goals per-game is the second-best of his career.

After a career-high of 24 goals last season, Pearson has 10 this year and hasn’t scored in nine games. Toffoli has 19 goals on the season, but just one in his last 15 games.

Kopitar sounded confident that the two would figure out a way to get back on the scoresheet.

“Well, I don’t think there’s any secret, I mean – you know they’re going to have to find a way to get on the scoresheet, that’s just the bottom line but it’s way, way easier said than done,” Kopitar said. “I mean I’ve been through that last year and I know how it feels and I know those two care a lot and you know, I sure hope not, but hopefully they’re not thinking about it too much. I think at the end of the day now is whether they score a goal or block a shot, at the end of the day if we win a game that’s all that counts and hopefully they’ll get it going and I’m sure they will.”