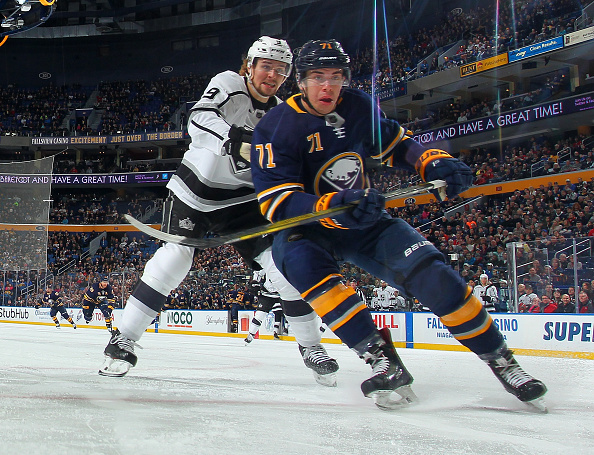 On how the team fed off a strong start:
I thought the start of the hockey game was the difference. It was probably a big reason we won the game. I thought we did a lot of good things, it wasn’t just the first-line. I thought we had a really good rotation through our lineup where guys were really playing fast. We got pucks up to speed, we got pucks in behind, we got a lot off our forecheck early in the hockey game, which was good to see.

On how the team spent little time in defensive zone and often got the puck out on the initial pass:
We did early, and for two periods there, it was probably the last minute of the first and the last minute of the second, I thought we kind of got off page a little bit and then they made a big push in the third period that we weren’t quite ready for. I think when we were getting people back in position, it allowed us to play fast. They really started to push down walls and I thought we had the support necessary to move plays, it wasn’t 30-foot plays, it was the 15-foot support plays or chip plays that really allowed us to exit the zone quickly.

On how everyone was in sync on Anze Kopitar’s first goal:
Well, if you just look at that goal, just the effort to get back above the puck and force a turnover really allowed us to have good gaps with our D and our forwards. I think it’s important. Everyone talks about backchecking or tracking now but it’s really a good tool for offense because you can turn pucks over, people are out of position and I think that was a good example of it.

In if scoring the first goal enabled the team to play more its style and allowed players to relax:
I think to be honest with you, we relaxed a little bit too much in the third period and (let them) back in the hockey game but you know what, I thought the Amadio line was really good for us so I’m not surprised they scored the first goal. I thought they were really responsible. I thought they showed a lot of composure. We put Michael back in the middle tonight and I think he’s much more comfortable in the middle of the ice and he has a lot of composure in the middle of the ice. I think having that line going tonight allows us to play four lines and really allowed us to play with pace.

On Tyler Toffoli being moved down in the lineup and if that was done to get more balance:
The other thing is (Mitchell) has been really good. He can play winger or middle and he’s good on faceoffs. (Thompson) has been really good on faceoffs. Michael, he’s young but it’s an area I think he’s going to be good at. So it gives you a lefty-righty with Kempe and Mitchell so it just allows us a little more balance, especially on the road when they’re going to get last change, we just thought it helped us and I thought it did tonight. Certainly (inaudible) (Thompson) creates a lot (Clifford) gets in on the forecheck (Toffoli) is going to get pucks in areas that are good for us and I thought the change in lines helped us.

On Kopitar’s game:
I think (Kopitar) is a dominant player in the league. If you’re building a team you want him on it.

On winning in Buffalo for the first time since 2003 and if that ‘chases some demons’ out:
Maybe for you guys. We told the team, I hadn’t even realized we hadn’t won here in I think it was 14 years. [Reporter: 15] Was it 15? Well this group had never played here together. For us it was time to win. I think that was like an added bonus for the organization but the group that played tonight had never played here before.

On Alex Iafallo having a lot of friends and family at the game and if the team was giving him a hard time about it:

Not really, there’s lots of guys that have family in town here and Buffalo, I think, it maybe it puts pressure, but we play in Toronto as well all the time, but yes, I think there was heavy attendance from the family of our players because we’re so close to the Toronto area but I think Alex has played in enough big games where he’s probably more excited than nervous.