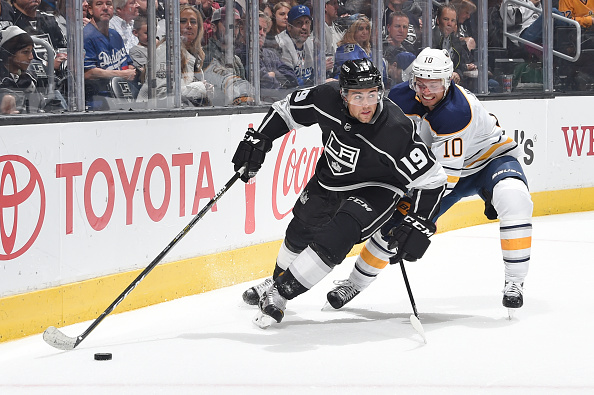 Forward Alex Iafallo understands the decision by his parents to not attend his first NHL game at the Buffalo Sabres.

Iafallo’s sister, Julianna, is a hockey player at Ohio State and they opted to go to her senior weekend instead. Plus they’ve been to several other games he has played with the Kings, so he figured it was OK for them to skip this one.

“They had to make a decision, a tough one,” said Alex, a native of nearby Eden, N.Y. “I’d rather have them be with my sister, it’s her senior weekend.”

Still, Iafallo will have a large group of family at KeyBank Center. He said there will be two buses taking people from his dad’s bar/restaurant in Hamburg, N.Y. to Buffalo for the 10 a.m. (Pacific time) game between the Kings and Sabres.

“Pretty big, you know,” Iafallo said when asked about his ticket request list for the game. “A lot of important people I want at the game and especially seeing them after and giving hugs and telling them ‘thanks for coming,’ it’ll be a really fun night tomorrow.”

Iafallo said he played some youth games between periods at KeyBank Center and a few “serious games” in the arena, but clearly his first NHL game in the building carries different significance.

“I always had it circled. I’ve always wanted to play in my hometown and play in front of my friends and family,” Iafallo said. “It’s definitely an honor and I have to keep doing my job to stay up and keep producing like you said.”

“Drury obviously was huge – a huge player I looked up to,” Iafallo said.

Iafallo has been one of the more pleasant surprises for the Kings this season with 19 points in 55 games while averaging 15:48 of ice-time per-game. Los Angeles signed Iafallo as a college free agent last summer and he has found himself on Anze Kopitar’s line for most of the season, often using his speed to hunt down pucks on the forecheck.

As for Saturday, the team doesn’t seem worried about the requests for Iafallo’s time in his home area. He has proven himself to be a solid pro all year and shown an ability to concentrate on performing at a high level in any situation.

“To me at the end of the day, he’s done a really good job of just focusing on the task at hand,” Coach John Stevens said. “He understands what he needs to do to be a good player and I’m sure if anything he’s motivated and excited to play in front of his family and friends here.”