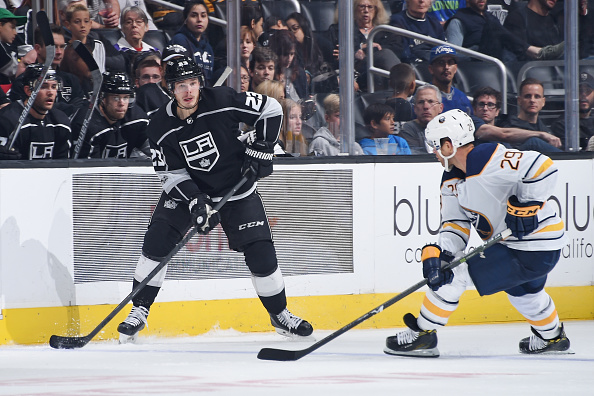 The Kings held an optional skate at KeyBank Center today in advance of Saturday’s 10 a.m. game at the Buffalo Sabres.

There was not much new to report other than Alex Iafallo was the most popular person in the Kings locker room from a media perspective. Iafallo is from nearby Eden, New York and his dad owns a bar close to where the Buffalo Bills play. We’ll have more on Iafallo later.

The Kings have not won at the Sabres since Feb. 21, 2003. On that date Zigmund Palffy scored two goals and Jamie Storr made 31 saves as the Kings prevailed 4-1. Overall the Kings have lost eight straight games at Buffalo. The only player from that game still in the NHL is Anaheim Ducks goaltender Ryan Miller.

You can check out the boxscore here if you want to take a trip down Kings memory lane.

“We’re not worried about a losing streak, we’re trying to get two points because we need them desperately,” Kings forward Dustin Brown said.

– The Kings are now officially over halfway through their seven-game road-trip and a lot of the good vibes from the start of the trip have gone away with three straight losses. The Kings currently have a 1-3-0 record on this trip, their only win coming in the first game at the Florida Panthers. The team has tried to take an even-keel approach, though they understand if the losses continue to mount, the season could get away from them.

“It’s definitely not the best start to our road-trip but we’re also only three points out. We’ve been through this, I’ve been through this before, where you have to play good hockey down the stretch to get in,” Brown said. “We saw a little bit of that last year when we were chasing and three points became six points, became 12 points and it is what it is, right? It’s just being aware on a day-to-day basis where you are in the standings. Again, there’s still a lot of hockey to play this year so it’s a matter of preparing to play better.”

– The Sabres come in to Saturday’s game as a team playing well. Though Buffalo has the NHL’s second-worst record, the Sabres have gone 3-1-1 in their last five.

“We want to continue to win here and build that winning environment down the stretch. It’s a great challenge for our group,” Sabres Coach Phil Housley said. “There’s a lot of teams that we’re playing are either in the playoffs or in playoff contention so we understand where our opponent is so we know we have to be ready because they’re probably saying ‘this is the game that can turn it around for us’ so we have to be ready to go tomorrow.”