Stevens on Phaneuf and Thompson in practice, bouncing back from Carolina 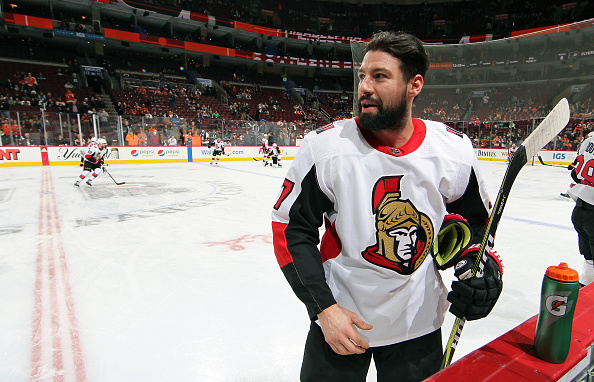 On trying to integrate Dion Phaneuf and Nate Thompson into practice:
I think the guys that have been in the league long enough are pretty familiar with both of them. Nothing’s really changed in that sense. Nate’s been a really good faceoff guy, plays the game hard, is a good penalty killer, really good on the forecheck, got him in here last night, got a chance to skate this morning and Dion just plays in all situations, big guy, good personality and has a real identity to his game. We’re not sure exactly how it fits in. Time will tell, but certainly excited to have both of them on board here.

On maybe not having Phaneuf in the lineup because of immigration issues:
It doesn’t really change our back-end because we didn’t move anybody off the back-end. We’ve had guys here that have done a pretty good job for us all along so we have depth at that position right now. If he’s not able to play then we have seven healthy guys to move in. We have guys that can play both sides, so it gives us lots of options.

On Kevin Gravel’s improvement:
I think (Kevin’s) game has come along. I think with any young player you want to see real consistency in his game. I think his game is in a much better place now than it was at the start of the year and I think with Paul LaDue, I think it’s the same thing. So we’ve given ourselves flexibility. They’re two a little bit different players but both guys can play on the power play and both guys are good puck movers, both guys defend pretty well. I think (Kevin’s) game has come along and he needs to keep trending in that direction.

On players going back and forth between the NHL and minors and the confidence they carry:
I think it’s a huge help. If you look at the history of the players in our organization going all the way back to (Muzzin) and (Martinez) and Voynov on the back-end and then you have Tyler and Tanner who have gone back-and-forth, every time they went to the minors and came back, they were better players. They had big minutes in key situations down there. When you go down with the right attitude you go down there and try to be the best player and those kids have done that and now when they come back it seems like every time they come back they’re just a step better, a little more confident, not as hesitant. That comes with experience, that comes with growing as a pro and I think the development of those guys going back and forth to the minors only helps their ability to be good players here.

On if the team is ready to bounce back after losing 7-3 at Carolina on Tuesday
I think the group handled yesterday the right way. I think nobody was happy with the way we played in Carolina and knew we need to play a lot better. So we got back to work yesterday. I thought the group’s attitude was really good and we have a tough opponent in front of us in Pittsburgh that’s playing well, especially at home here, so this group has had an ability all year, whether it’s in-game or game-to-game to bounce back and we expect a good game out of this group tonight.