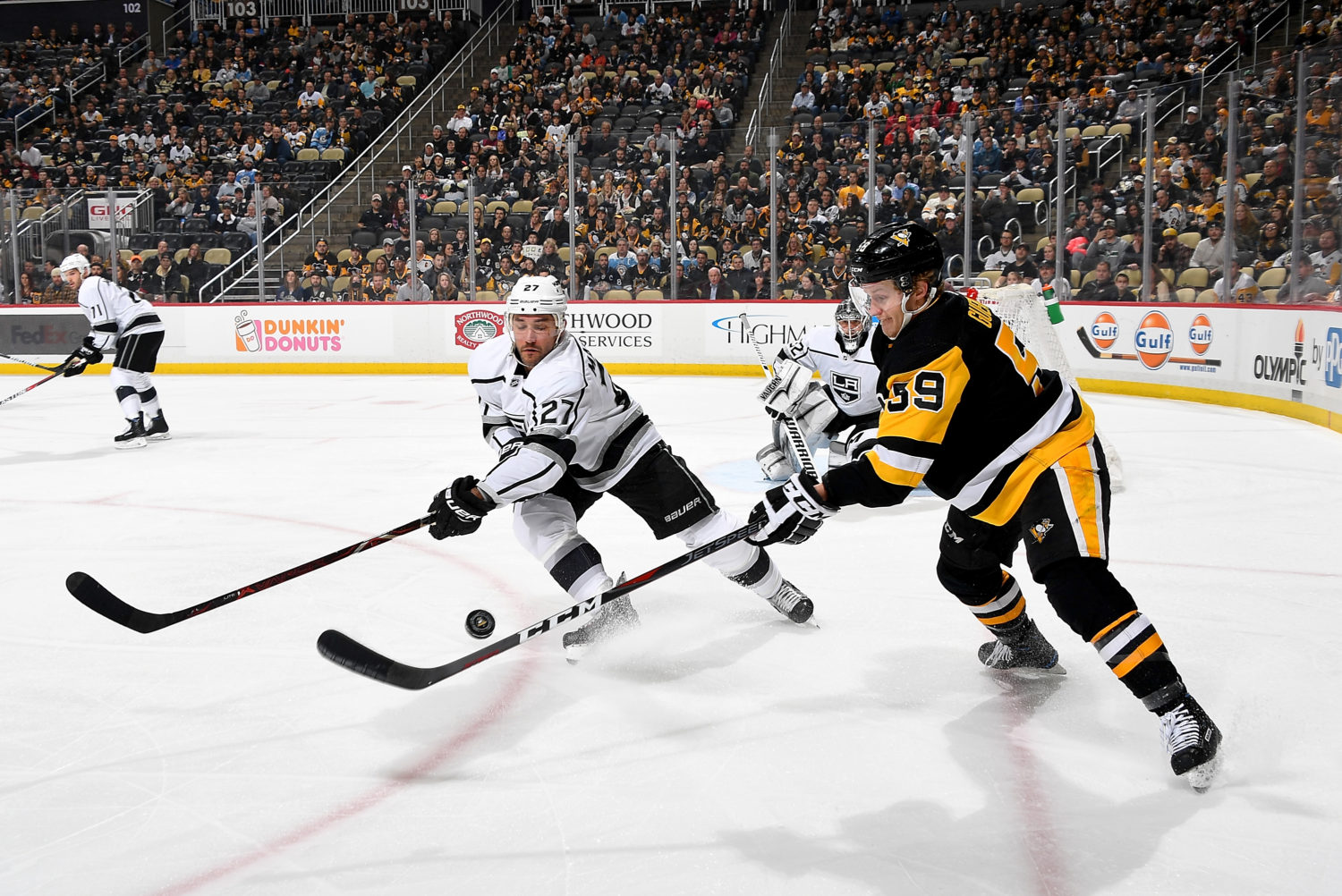 Anze Kopitar, on whether Dion Phaneuf knew if he would play today:
I mean, I think his mindset was just to prepare like he’s playing and then whether he gets the green light or not, so I just thought he went in—you should probably ask him—but I think he went through the game day routine that he always does so he was ready.

Kopitar, on if the team wishes they could’ve done more considering Quick’s performance:
Yeah of course. I mean Quickie was huge back there. He gave us a chance and you know, you just can’t expect to come on the road and score one goal and that’s going to be the game. We’ve got to find a way to create more and finish more.

Kopitar, on what happened in the first and third periods:
I mean, that’s the way the game is played really. You know, you go and it’s a tie game going into the third period on the road. That’s the position you want to be in. I mean you’d much rather have the lead, obviously, but it’s not a bad position to be in. So we’ve just got to find a way to finish those games and that’s what separates a good team from a playoff team.

Kopitar, on if he can see the aspects of Phaneuf’s game that will fit well with the team’s system:
Yeah I think so. I thought he gave us obviously very solid minutes tonight, scoring a goal, and he has that threat of his shot that is welcome on the power play and even the five-on-five he was shooting the puck pretty well tonight. Yeah, even the physical presence and the veteran presence in the room is going to help us.

Dion Phaneuf, on his impressions after playing his first game with the team:
I really like a lot of things that we did as a team. And just the bottom line is, we didn’t find a way to win the game, but we did a lot of good things we’ve got to build on. Personal stuff, to be honest, doesn’t matter. It’s about winning games and unfortunately we fell a little bit short. But the guys have been great to me. They’ve welcomed me into the room. They’ve made my transition very seamless and I can’t thank them enough for that.

Phaneuf, on seeing Quick in action:
I obviously have seen him a lot. He’s been in the league a long time and he’s won. He was incredible, really. The saves he made, I think they’re big momentum saves. They kept us in the hockey game and he was really good to play in front of. He talks. I thought he really gave us a chance and made some spectacular saves at key times of the game that really kept us in the hockey game.

Phaneuf, on how he prepared when he didn’t know if he would play tonight:
Well, you prepare like you’re going to. I was preparing like I was going to play the game. The odds were the immigration stuff wasn’t going to go through is what I was told, but then I can’t thank the people at the office that worked so hard to put everything through to allow me to be able to play so quickly. So I’m very fortunate that they were able to get the paperwork done and when I found out, I was pretty excited to have my first opportunity to play for this organization.

Phaneuf, on whether he’s looking forward to life with his new team:
Well, I was actually fortunate to stay in Pittsburgh and meet the team here, so it worked out well. And now you go about your business.

Phaneuf, on when he found out he was cleared to play:
This afternoon. Later in the afternoon.

Phaneuf, on whether he thought the game got away from the team a little bit:
Well, I thought we generated a lot, but they got that power play that generates for them and they found away to get one. But overall, we generated a lot, we got to their net, we got pucks to the net, we just didn’t have that little bit extra and they seemed to have found that. But I thought we did a lot of really good things also.