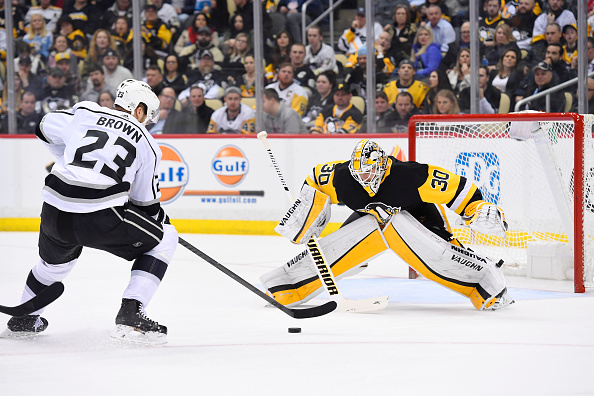 On not getting any points despite Jonathan Quick playing so well:
He was excellent. I thought the team played hard tonight just thought that we started to spend a little too much time in our zone. I thought our wall play let us down and got us in trouble tonight. I thought we had pucks on walls that could have got out, didn’t get out, came back towards our net, created a lot of chances from those types of looks so we ended up spending too much time in your zone, not enough time in their zone, ends up being easy minutes for them but (Quick) took a big step there. I thought he gave us a chance to win the hockey game and that’s what we need.

On their game-winning goal which came on the power play:
It was just a shot through traffic. For us the second unit was out there, so they’re the best power play in the league for a reason. They attack the net, they find the open guy, they get people at the net, they recover a lot of pucks. We talked about the last time, we took a lot of penalties, I think it was nine minutes in the third period in a game at home and you have to stay out of the penalty box. Four is too many. Again, it ends up being – they forecheck hard and they force a lot of pucks on the wall, I just thought the wall play and it was another derivative of a wall play but if we could have managed the puck better on the wall I think we would have spent less time in our zone and he would have had to do less work.

On if the Penguins look like a bigger, stronger team:
We don’t see them a whole lot to be honest with you. I think they’ve added some size in their lineup. I think the big change in their team was Bonino and Cullen moving on. I think the Sheahan kid has really helped them and has kind of solidified that third-line role and given a lot of D-zone starts. They always build around their big guys there with Crosby, Malkin, Kessel up front and some of those kids have really come along. They still have speed. They’ve added size with obviously Reaves and Oleksiak on the back-end. Cole’s come back into their lineup. He had been out for a while so they’re certainly a little bit of a different looking team maybe perhaps than the past but style of play I don’t think has changed a whole lot.

On how the Penguins pinned the Kings in the third period:
I think it’s just they really came hard on the forecheck and forced pucks on the walls and that’s not uncommon now with the way teams forecheck. I think we have to clean up that play a little bit whether it’s eat a play, chip to speed, I think we had some flat plays that came back at us but plays below the goal line, which is wall play, plays along the wall, which is wall play, I think that would have made a difference for us. They put a big push on their power play, or on their forecheck rather, led to a power play and led to zone time.

On the two new players, Nate Thompson and Dion Phaneuf:
I think they both help us. I think Dion’s got a really good personality and brings a lot of energy to the bench. He’s a big guy that can skate, defend and move pucks and (Thompson) looks like a guy, he’d been out for a little bit here, so he got his legs back under him. He did a good job on the penalty kill. He’s a smart guy, he looks like he’s big in the shot lane and has a good understanding of the game, so I think they both help us.

On Phaneuf and Alec Martinez as a power play point pair:
They’re both guys who play lots on the power play. Dion, to me, looks like a guy that wants to shoot the puck all time, which is a really good thing. When he gets the puck he’s always looking at the net and if there’s not a lane to the net he’s still trying to get it in behind, either off the end wall or look for a stick in front, so to me that’s a great asset to have on a power play.