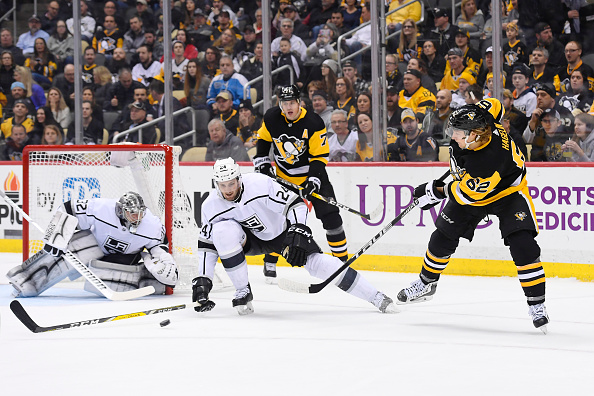 – Goaltender Jonathan Quick faced 38 shots on goal. He has faced 36 shots on goal or more in the last three starts where he has finished the game. Quick made 36 saves on the Penguins in this contest.

– Defenseman Dion Phaneuf scored his first goal as a King in his first game as a King. He also took three shots on goal in 18:56 of action. Phaneuf’s goal was his fourth of the season and first since Oct. 26. Earlier it was believed that Phaneuf would not be able to play because of immigration issues, but those were resolved before faceoff.

– Defenseman Alec Martinez’s assist was his seventh power play helper of the year and eighth point on the power play this season. He ranks fifth on the Kings in power play points.

– The Kings allowed a power play goal for the fifth straight game. In that stretch their penalty kill has been 61.1 percent – 11-for-18.

– Penguins forward Zach Aston-Reese scored is third goal in his sixth NHL game. It was also his second game-winner.

– Penguins forwards Evgeni Malkin and Sidney Crosby each notched one point – Malkin a goal and Crosby an assist. Since. Jan. 1, Crosby’s 31 points and 26 assists lead the NHL. In that same timeframe, Malkin’s 18 goals rank first in the league and his 30 points rank second behind Crosby.

– The Kings will practice Friday at 2 p.m. in Buffalo.