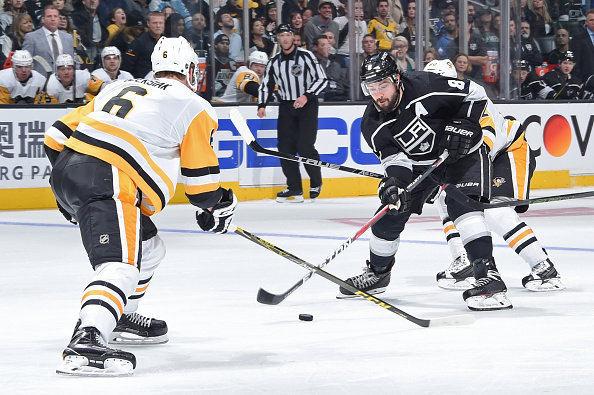 The Kings skated this morning at PPG Paints Arena in advance of their 4 p.m. game at the Pittsburgh Penguins and showed the below lines:

The belief is defenseman Dion Phaneuf, who was acquired Tuesday from the Ottawa Senators, will not play because of visa issues.

Also, it appears defenseman Kevin Gravel will draw into the lineup for his first game since Feb. 7 at home against the Edmonton Oilers. Gravel is currently riding a two-game point streak. The coaching staff appears to have put forward Dustin Brown back on a line with Anze Kopitar and moved Tyler Toffoli to a trio centered by Adrian Kempe.

In regards to who will start in goal, Jonathan Quick was the first netminder off the ice – indicating he will be tasked with stopping the powerful Pittsburgh Penguins, a team that has scored 3.10 goals per-game this season and converted at 26.7 percent on the power play.

Lastly, the coaching staff seems to believe new King Nate Thompson will be able to play in this game, despite not having played sine Feb. 4 due to injury.

Thompson said he knows forward Tyler Toffoli along with defensemen Jake Muzzin and Alec Martinez from informal summer skates because he stays in the Southern California area during the offseason. Thompson played with the Anaheim Ducks for the previous three seasons and his fiancée is from the Los Angeles area.

“We’re pretty excited about getting back there,” he said.

Thompson also said he and met Jeff Carter and Drew Doughty at the wedding of Ducks winger Corey Perry.

“He was the MVP (of the wedding),” Thompson joked about Doughty.

Thompson knows the Kings system from playing against them several times per-season the last few years and feels like he can fit in easily.

“It’s a simple hockey game, the way they play, but it’s a ‘hard-to-play against game,’ North-South,” Thompson said. “It’s the way I like to play, so I don’t think it will be a hard transition at all.”

Thompson also said he felt healthy and ready to get back into NHL game action after not playing over the last 11 days.

“I feel great. I’ve been skating the last few days or longer than that. Didn’t get to skate yesterday with a day of travel but went out there this morning and I feel good,” he said.

– The Kings say they’ve tried to get back to work the last couple of days in order to make sure they don’t have another performance like their 7-3 loss at the Carolina Hurricanes last Tuesday. In that game they allowed a hat-trick to defenseman Justin Faulk along with 41 shots on goal by Carolina.

“I think last game wasn’t really acceptable from our side and I think everybody knows that and we’re just going to try to get back on track here,” forward Adrian Kempe said. “We proved we can play really good. We just have to do it for 60 minutes and not some parts of the game. It’s going to be a huge game tonight. They’re a really good team. I think we just have to be on our toes right away and have good preparation. We’ve had a good couple days of practice here so it’s going to be a fun game.”

– According to the Canadian Press, Gaborik will be on the first-line when the Senators play the Sabres tonight along with Mike Hoffman and Matt Duchene. Both Gaborik and Nick Shore were the pieces going to the Senators for Phaneuf and Thompson.

“I think every player wants to compete in the playoffs and to play for the Cup,” Gaborik said in the CP. “L.A. is in a pretty good position compared to Ottawa, but you know there’s 27 games left and we just have to play game by game and you never what can happen. It’s just to create good habits and make sure the team gets back on track and be ready to play every game and compete.”

Added Gaborik, “Hopefully I can come back to being myself and play good hockey for Ottawa.”

Shore will reportedly play with Ryan Dzingel and Colin White.

“It’s a new team, new city so you want to come in here and try and play your game,” Shore said. “There’s a lot of different changes, but you just want to try and stick to your game and just go play.”

– Check out how Jeff Carter and the Kings helped open a Wags and Walks adoption center.

– The Kings have played well recently on the road in Pittsburgh, going 6-3-1 in their last 10 games in the Steel City.