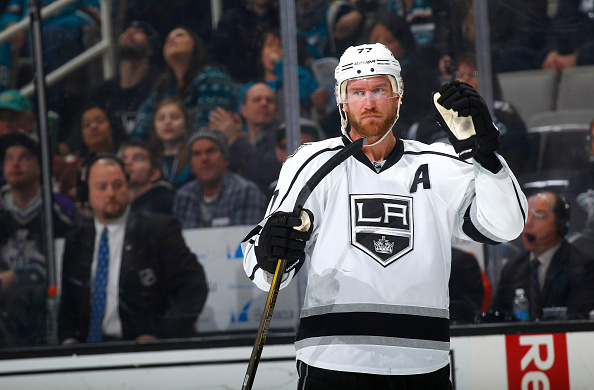 Kings general manager Rob Blake said that defenseman Dion Phaneuf had been on the team’s radar for quite some time as far as a potential acquisition before the deal that landed him in Los Angeles last Tuesday.

“We’ve been trying since the draft, we’ve been talking regarding that. It was a situation I think fit both teams – a little bit of cash savings obviously in Ottawa, similar cap hit contracts going both ways at the end of the day. So it’s something we’ve been talking about for a while,” he said.

Overall Blake seemed happy with the return of adding the rugged blue liner and forward Nate Thompson in exchange for Marian Gaborik and Nick Shore. In his opinion, the move solidified the Kings’ defense – a spot he saw as a position they wanted to upgrade.

“I think one of the main parts in there was Dion obviously, filling a need that we felt we need on defense, we’ve needed throughout the season here. He’s going to fit in good with our group and everything,” Blake said. “(Gaborik)had kind of been in and out of the lineup, I’m not sure he’s producing at the way we wanted him to so you kind of switched those two guys and then you switched fourth-line centers.”

Added Blake on Phaneuf, “He is hard to play against. He understands the little things that go on with the game against certain players and for certain situations in that but if you look at our D-core in whole with Doughty, Muzzin and Martinez, Forbort and Phaneuf in that mix and whoever you want to use with the last pairing, I think it makes us a deeper team than we were a couple of days go.”

As for Thompson, Blake is familiar with the forward’s game, having seen him plenty as a member of the Anaheim Ducks for the previous three seasons. In the past when the Kings have been successful, they’ve had players like Thompson on their lower lines, which is why Blake wanted to add him.

“I think traditionally the fourth-line centers we’ve had here with the penalty killing role but character also and hard to play against, a lot of those components. I think will fit in here well,” Blake said.

The only major issue with Phaneuf specifically is that he may not be able to get into the lineup right away for the Kings because of immigration issues. This is similar to how Los Angeles had to wait for Torrey Mitchell earlier in the season after he was acquired from the Montreal Canadiens. Thompson is from the United States, so he won’t have a problem with stepping into the lineup right away.

“That’s a good question for (Executive Vice President, Hockey Operations and Legal Affairs Jeff Solomon) he’s our immigration lawyer. We ran into a snag with Mitchell. It took, I don’t know, seven days or something. We’re hoping we can get that a lot quicker,” Blake said. “Monday is a holiday though so if it’s not done by Friday we go Saturday, Sunday, Monday is a holiday though so we can run into a snag there if things don’t get done here tomorrow. So we’re hoping but again that’s kind of out of our hands.”

Added Blake, “He’ll be able to play in Winnipeg (next Tuesday) right, no matter what. Like even if he doesn’t get the visa, because we’re in Canada he can play that game.”

– As for other news and notes, Blake sounded optimistic that forward Jeff Carter, who has played six games all season because of a deep cut that required surgery to repair a tendon in his ankle, will rejoin the team at practice when the group returns to Los Angeles next week.

“He’ll hopefully join the team when we get back from this road-trip practice-wise and once he’s integrated into practice it’s a matter of time, but as far as progressing, everything is on track,” Blake said. “He’s doing as much as he possibly can on his own. We felt it was better to leave him behind because we were limited in practice days here.”

In some respects Carter could be the team’s best trade deadline acquisition since the Kings need an offensive boost and Carter should give it to them internally.

“I think when you add a player of Jeff Carter, that we already know and we know where he fits into our lineup, it moves everybody around and into the right spots. We’ve had a lot of guys having to play out of position this year in the middle. It’s no secret,” Blake said.

– In regards to the trade deadline, Blake noted that the team needs to score more goals, but he doesn’t want to give up young assets. This is because Blake has put an emphasis on trying to restock the Kings’ prospect cupboard and not give up on the future to go ‘all-in’ on now.

“If something comes that is realistic – I’ve read the kind that quantify trades as a hockey trade or not, if it’s a hockey trade that makes sense, yes. If it’s a rental, no,” he said.

– Blake classified forward Trevor Lewis as having an “upper-body” injury and said Lewis was “week-to-week.” Last Friday, Lewis slammed back and shoulder first into the boards at BB&T Center in Florida after being hit by forward Jared McCann. Blake did point out that Lewis did not suffer a concussion.