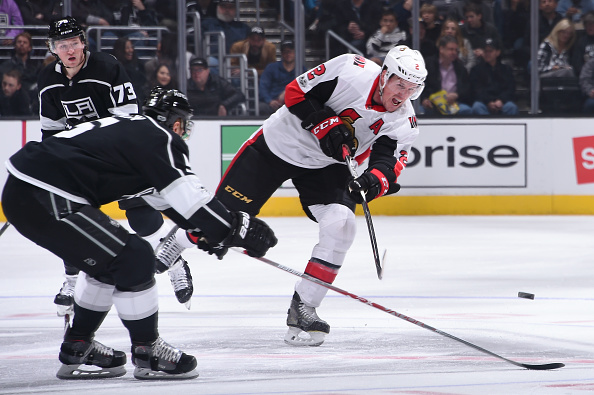 On how the trade for Dion Phaneuf and Nate Thompson changes the look of the hockey team:
I think it changes quite a bit. It gives you a veteran guy on the back-end that can play both sides and play in all situations and has a lot of experience in the league and played at a high level and has a real identity as a player. So I think it gives you a lot of options and you’re not sure how it all lays out just yet but for sure gives us a lot more depth on the back-end, a lot more size and checks a lot of boxes.

On how Nate Thompson can help the group:
A veteran guy coming in like him that, one he’s really excited to be coming here. He’s good in the faceoff circle, he can play all three forward positions. He too has a real identity. He understands the West. He has played lots in the West, understands the style of play. I just think that when you have a guy, he’s a really good 200-foot player, a good penalty killer, good in the faceoff circle, can really give you some stability and I think he’s the type of guy that can help the people around him just with his experience.

On Phaneuf’s versatility as a player:
I think Dion’s just, you call him a real identity player. I think when you look at him, he checks a lot of boxes in terms of his skillset, but I think he has an identity. I think he’s a hard guy to play against. He has good puck skills, he put up big numbers before, he can defend well, he can move pucks, he can get involved in the offense and he can punish guys along the wall in open ice, so he has a real identity as a well-rounded, physical 200-foot defenseman that can help you at both ends of the rink so we’re excited to have him.

On trying to formulate a pair for Phaneuf:
Well we knew he was going to stay (in Pittsburgh) and meet us here and we knew we had practice today, so we’re not exactly sure. The thing with Dion is he has played lots of left and lots of right. He has played a lot more left lately than he has right. He’s comfortable on either side. Just like (Martinez). He may have to go back-and-forth but I think time will tell here. We’ll see. Sometimes you have this idea in your mind of chemistry and it doesn’t work and then sometimes you have something else that works really well, so either way he’ll be a big part of things.

On if this trade for Phaneuf addresses a top priority of adding a defenseman:
I think any good team, you’re really going to rely on your defense to be a solid group. You need great goaltending, you need your defensemen as a group to be able to defend and play well and move pucks quickly. I think any time you add a player like him to your team it definitely improves your situation on the back-end, just with his size and experience and I think he makes us a better team, so there’s no question in the fight that we’re in right now for a playoff spot and the way the schedule is, we have a guy like him that can play big minutes and all situations, it’s going to definitely help us.

On management looking to add around the deadline:
I think the management staff has done a great job here, and that includes the development staff. I think the one thing they’ve really looked at over the course of the offseason moving forward is we know we have to get better from within. We know the LaDues, the Gravels, the Brodzinskis and the Kempes, if we’re going to get better as a hockey team we have to get better. And we can’t sacrifice the future by making a ton of trades to try to get better right now. We’re going to get better, they’ll make the moves very responsibly and we know we need to get better from within. Guys that are here need to be better players and they will. Any time they can make a move like that, that doesn’t sacrifice the future of your hockey team, I think it’s a real credit to the work they’ve done.

On the team getting in a good practice after losing 7-3 last night:
Last night was unacceptable, I think for the players and certainly for us, so I think the guys came in today with the right attitude knowing that last night wasn’t good enough and came out here with the right attitude to get some work in here and be a better team at the end of practice than we were at the beginning of practice and I thought our leaders were pushing the attitude in the workout there, which was great. Just a good, solid workday to get some reps in and (you) don’t often get time to practice this time of year. The breaks are behind us now and the schedule’s in front of us and I thought it was an important day that was handled the right way by the group.

On where Thompson is at with his injury since he didn’t play the previous game and hasn’t played since Feb. 4:
Talked to him this morning. He’s going to get in here tonight. Apparently he was set to play Thursday for Ottawa so all indications are that he should be ready to play tomorrow but until we get a chance to see him first-hand. He’s in the air now. When he gets in here I’ll get a chance to catch up with him tonight (inaudible) he has been skating, felt like he was going to be ready to play prior to the deal, so we’re hopeful that he feels good enough to play.

On if the team will make a move or call-up tomorrow?
Possibly. We’re right on the number with him, right? So even if Nate’s healthy with the games … the other thing you have to be careful of is there’s days that come up and first thing in the morning guys get sick, have an illness. We’ve had it this year with Kempe, we’ve had it with a few other guys and you don’t want to put yourself in a situation where you need a guy and couldn’t get him here, especially being on the East Coast right now so more than likely we will.

On how the additions help on the penalty kill:
For sure, I think the penalty kill has been, not just a little bit but a lot, it has been a stretch here now where it hasn’t been as good as it needs to be. I think for whatever reason, I think we all know the reason, but it’s analytically proven that your penalty kill is more important than your power play. So how can that be? It’s the case. We know that and we believe that and we want to start making a push here. That part of our game needs to get better and those guys will help.

On the Penguins:
Pittsburgh’s interesting. They had some big changes last year with some guys moving on, especially down the middle. They’ve had two long runs where they’ve struggled the first half of the season but still kept themselves in the hunt and probably played their best hockey of the year the last month and their stars are their stars but they’re getting big contributions from some of their young players coming along. The Aston-Reese boy, I’m very familiar with. He played college with my kid, he had a couple of goals last night. They’ve had a bunch of kids come up and play with their veteran guys that have been big contributors and they’re defending a lot better. They play fast. They push the pace all the time, power play’s extremely dangerous and I think special teams both sides of the puck they’re very good. You have to keep their stars in check, but I think it’s also important to understand that they’ve been getting big contributions up and down their lineup. We have to make sure that our team game is going to have to be in order.