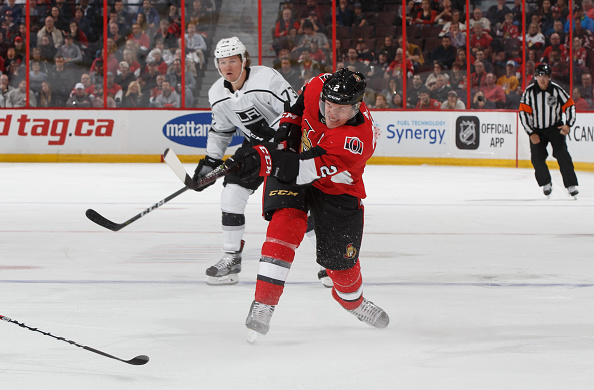 Earlier, the Kings practiced at UPMC Lemieux Sports Complex in advance of their Thursday night game at the Pittsburgh Penguins and were joined by defenseman Dion Phaneuf for his first set of drills with the team. Phaneuf was added Tuesday night along with forward Nate Thompson from the Ottawa Senators in exchange for Marian Gaborik and Nick Shore.

Here is how the Kings lined up — keeping in mind they were down a forward because Thompson hadn’t arrived yet so Michael Amadio and Andy Andreoff worked together mostly:

Later in the day, the Kings recalled forward Michael Mersch from the Ontario Reign. He has appeared in 45 games this season with the Reign, posting 33 points. Mersch also appeared in 17 games with the Kings in 2015-16 and notched three points.

At practice media availability, Coach John Stevens said a recall was a possibility to give the team some wiggle room in case a player unexpectedly can’t take part in the next game.

“The other thing you have to be careful of is there’s days that come up and first thing in the morning guys get sick, have an illness,” Stevens said. “We’ve had it this year with Kempe, we’ve had it with a few other guys and you don’t want to put yourself in a situation where you need a guy and couldn’t get him here, especially being on the East Coast right now.”

Because the Senators played at the Penguins on Tuesday, Phaneuf didn’t have to travel to meet the team. Thompson, on the other hand, was traveling to join the Kings. He has not played since Feb. 4 because of a lower-body injury, which kept him out of Ottawa’s Tuesday game at Pittsburgh, but Stevens said Thompson could be ready to play in Los Angeles’ game at the Penguins.

– Kings defenseman Drew Doughty said he knew Phaneuf from Team Canada’s Olympic camp and believes Phaneuf should be a solid fit with the group. Doughty pointed out that Phaneuf showed strong qualities off the ice as, one of the people trying to put together team bonding events at the camp, to go along with his solid play on the ice.

“Actually just from being with him at those types of things I could see the leadership he brought. He was like the first guy kind of organizing golf outings and stuff like that, so right away I could see the leadership he’ll bring to our team,” Doughty said. “Right away I was excited and obviously I know how good of a player he is too, so I think he’s really going to help our team.”

Added Doughty, “He’s a guy who has stepped up on me before and got me before so I know what it’s like to be hit by him. He can hit hard and he’s physical at all times. He’s scary, like he can fight too. Like guys are scared of him. When you’re a 20-minute guy that can do all those things, that’s huge to have on your team.”

Doughty also seemed pretty pumped about Thompson’s addition. The rugged forward played three seasons with the Anaheim Ducks and proved a tough match-up for the Kings because of his physicality and speed.

“They both play our style of hockey,” Doughty said.

– In trades, you have to give up players to get players, and in the Kings’ case, the team had to part ways with Shore and Gaborik, two players who had forged bonds with the current roster.

Shore was drafted by the Kings in 2011 and played 221 NHL games with the organization. Gaborik had played 228 games with Los Angeles and was an integral piece in the team’s 2014 Stanley Cup run.

Nothing,but Thanks to superb organization @LAKings. It’s been great 4yrs with an awesome group of guys and amazing people. Also thanks to fantastic fans that were very supportive and always created the best atmosphere. Looking forward to new chapter and challenges with @Senators

“I think mostly I’m going to miss seeing them off the ice and being able to hang out with them,” Doughty said. “That’s the sad part because they were two guys I actually hung out with a lot, whether we went for dinner or hung out outside the rink, so that’s the sad part.”

– Thompson is the first player from Alaska to play for the Kings. He is from Anchorage. Phaneuf is also the first former Maple Leafs captain to join the Kings.