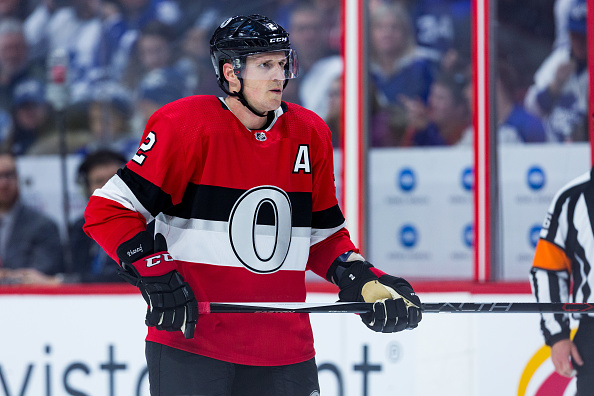 Defenseman Dion Phaneuf met with Los Angeles media for the first time following his Tuesday night trade from the Ottawa Senators to the Kings. Below is a transcript of Phaneuf’s answers to questions following the Kings’ practice at UPMC Lemieux Sports Complex.

On the last day since he was traded:
It was a whirlwind yesterday and today it was back to work so I was very fortunate to be in the same city that the team was coming to and it worked out really well. I’m glad I got to get into practice today. Usually when these things happen you have to travel and you meet the team at a later time and you don’t really get right into it so I’m fortunate to be able to go through a good practice here, get acquainted with the guys and the guys have been great right from last night, the texts that I got welcoming me to the team, really makes you feel welcome as a player and I can’t thank them enough for that. It’s been a short time already but everyone’s really been welcoming to me. It makes me feel comfortable and it’s just good to be on the ice with this team.

On if he knows anyone on the Kings:
I know different guys from over the years of playing against each other for a long time, whether it was during the lockout and skating down in California. I’m familiar with a few of the guys, but I don’t know anyone really well, but enough to say hi and have a good conversation but I’m really excited to be a part of this group. I think you look at the group with the experience that they have, the guys that have won, they know what it takes and for me I just want to come in here and help in any way that I can.

On being involved in a trade and trying to reset his mindset from his old team:
The biggest thing is you’ve got a job to do and me with my experiences with going through different trades, the bottom line is you come here and you do what you’re told, you do your job and you do what’s asked of you. I was fortunate to be able to practice with the team today and I think just right from Day One here I learned a few different things and it’s about picking things up as quick as you can and trying to fit in with the group.

On how his skills fit with the Kings:
Where I fit in as a role, that’s up to the coaching staff but for me as a player, I want to bring and do what I do and I’ve played a physical style of game for my entire career and that’s something I’m going to have to bring here. You’re playing in the (Western Conference), you’re playing against some big hockey clubs and for me I’m going to come and bring the edge with my game and try and contribute in any way I can.

On going into the playoff chase and if it “excites” or “energizes” him:
I think you answered my question for me. You used two great words. Excite, energize, this is what you play for. You play to be in these situations. You play to be a part of teams like this and I’m just very fortunate to be a part of the Los Angeles Kings and I’m very thankful for them bringing me in here.

On his scouting report of the Kings:
I see a team that’s got a lot of experience, that has guys that have won, that have had success in the league and they play … they’re a big team that plays a hard brand of hockey, but with saying that they’re fast. So in today’s game just from out West, knowing when you’re coming to play this team from the other side, they come as advertised. They’re a big team that can skate and I just want to try and add to that.

On the first time playing with a team based in the United States:
I’m only one day into it, if you asked me in a couple of weeks … [Reporter: I guess you’ve played your whole career in Canada where it’s considered more of a fishbowl so to speak. What’s it like moving out of there and coming to a team based in Los Angeles?] I’m really excited to come and play hockey and be part of this organization. I’ve heard nothing but positive and really good things about the organization, about the people within the organization and just from my first experience here with the guys, they’ve been very welcoming and I’m really looking forward to my experience in Los Angeles.

On his working out in Southern California during the last lockout:
I worked out in the last lockout when we missed half that year. I was skating down at the practice rink with a bunch of guys that stayed there. So that’s the time that I spent there.

On if Los Angeles is an area he can get used to:
Yeah, it’s a good facility, it’s going to be a change in weather, something that will be nice, but the bottom line is you’ve got a job to do, you go do your job and I’m just looking forward to the experience.

On if he has a feel for the recent DNA of this organization because he played for former Kings coach Darryl Sutter in Calgary:
I’ve played for Darryl before, he drafted, me but Darryl’s not there anymore but a lot of the guys here have played for him so for me I’m coming in here, I’m going to do what’s asked of me, try and do my job the best as I can and just add to the team.