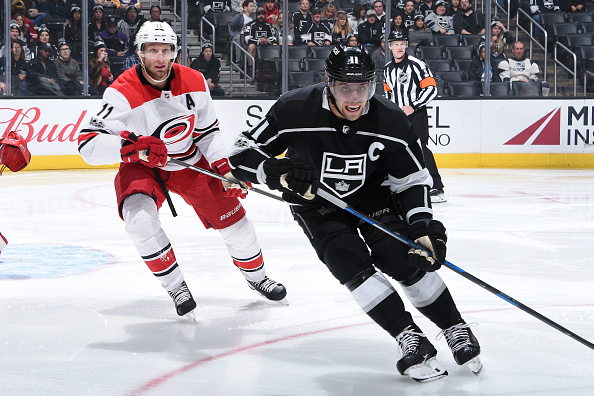 On what he’s hoping for out of Marian Gaborik in a possible bigger role tonight at the Carolina Hurricanes:
Well it doesn’t matter if we’re talking about (Gaborik) or anybody else, we need guys committed to playing 200 feet. You look at the league now the way it is. Teams play so fast and check so hard that you really have to work and check for your chances. You have to be willing to forecheck as teams really pull back in the neutral zone and they don’t give you a lot of space and I think when you get yourself in good position in the forecheck and come up with some loose pucks you end up with pucks in scoring areas, so we’ve certainly seen that with our hockey team. It works for us. We’ve really gotten some production, which I would call ‘secondary scoring’ on our hockey team but if we can get that supplemented by our primary scoring on our hockey team, we can give ourselves a much better chance.

On if he wants to keep the so-called “fourth-line” together, despite some of the necessitated roster moves because of Trevor Lewis’ injury and Dustin Brown’s suspension:
I wouldn’t even put a number on them. Last game we felt very comfortable with them out there. I though they got us going in the game, scored a big goal but it wasn’t just a goal. They did a lot of things right, they played with really good structure. They played with a lot of energy. They were extremely competitive and they got rewarded for it. So that’s the type of effort we’d like to see from them. I thought Brodzinski had probably one of his better games but the line just clicked and played well together, so we can certainly look at keeping that together, but I think there have been a lot of situations this year coming in and out special teams where we’ve mixed the lines, moved (Kopitar) around, moved the wingers up and down and our games have responded well to it. Whether together or apart we’re going to need the same type of effort out of them.

On not having Brown this game:
Quite honestly, (Brown) is an important guy on our hockey team but we really have to worry about the guys that are playing. The league suspended him for a game and we’d like to have him in the lineup. The thing with (Brown) is he’s one of those guys that plays every night. He plays a hard game but he rarely misses hockey games. It’s not often you have to get used to him not playing but he plays in a lot of situations, so a real, good opportunity for other guys to pick up some of those minutes, whether it’s penalty kill, power play or 5-on-5 minutes so I think you’ll find guys when they get the opportunity, they’re excited for it and they usually make the best of it.

On what they need to try to take away from the Carolina Hurricanes:
They play a really fast game. I think they have good balance. You look at their four lines and six D, they have really good mobility and skill and every time a group of five is on the ice, the one area that shows up over and over again analytically anyway is their forecheck is very effective, what they produce off their forecheck and the opportunities they create from the middle of the ice and you can see why. They spread the ice really well. They always have somebody knifing into the slot and I think if you looked just at analytics, which is dangerous to do, they probably should have scored more than they have. They do a lot of things right. They play hard, I think they’re well-coached and it’s not surprising they’ve climbed back into the playoff picture because they’re playing well.

On being mindful of minutes for his players on such a long road-trip:
I think our guys have done a good job and our staff has done a good job of just monitoring fatigue. We had just come off a three-day break where we didn’t play. We play every other day now until the end of the trip and then we have a back-to-back at the end of the trip. I think with our group what we’ve learned is ‘busy is good.’ The schedule is not, I wouldn’t say overwhelming right now. I think it’s set up for us good that we should be able to play with lots of energy.