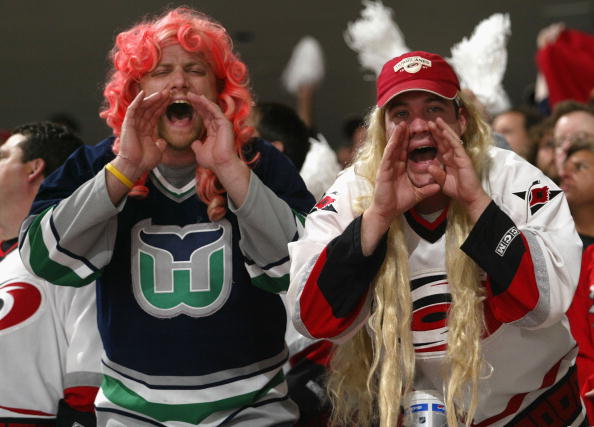 “I’ve had so many people over the years ask me about my jersey,” he joked.

Nachbaur played 154 games in two seasons with Hartford in the early 80s and isn’t surprised that Carolina Hurricanes supporters are pumped about the decision by new owner Tom Dundon to lean in to the organization’s Hartford history. The Whalers entered the NHL in 1979-80 from the WHA and then moved to North Carolina and became the Hurricanes in 1997-98.

The team store at PNC Arena has Hartford gear and Dundon has talked about the Hurricanes playing a game in Whalers jerseys. The team also played “Brass Bonanza,” the Whalers theme song, at the end of Carolina’s home game against the Montreal Canadiens on Feb. 1.

“There’s still a connection in Carolina to those Whaler days,” Nachbaur said. “Their general manager Ron Francis was an icon in Hartford. I actually played with Ronnie, so it’s there. It’s there. I heard that they’re actually selling jerseys here I might have to go look at that because I wouldn’t mind picking one up for myself.”

Nachbaur noted that if “Brass Bonanza” is played during the game it’ll certainly evoke some emotions for him.

“It’s going to bring back some old memories for sure,” he said. “I know it all by heart.”