Kings acquire Phaneuf and Thompson from Senators for Gaborik and Shore 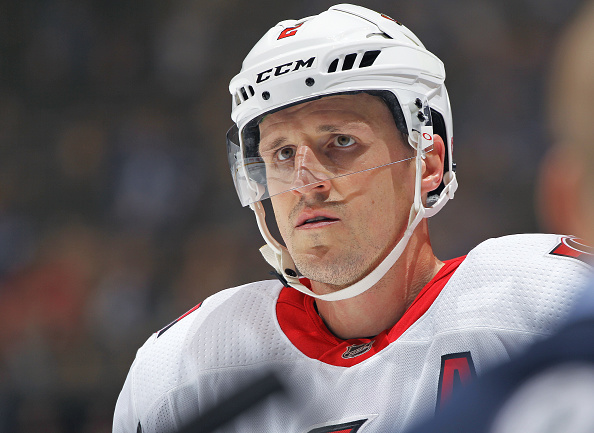 The Kings have acquired defenseman Dion Phaneuf and forward Nate Thompson from the Ottawa Senators.

“Dion brings to our club a great deal of experience and leadership. He also plays with a physical edge which complements our line-up well. Nate has a good reputation of being a high-energy player on the ice. Both guys are also high character guys,” Kings General Manager Rob Blake said in a statement. “We also wish Marian and Nick well. Marian has enjoyed a tremendous career to date and has played an integral role with our team over the years including a Stanley Cup Championship. Nick is a hard-worker who came up through our system and has developed into a solid NHL player.”

The 32-year-old Phaneuf has three goals and 13 assists this season and has averaged 20:26 of ice-time per-game. Last season he played 81 games for the Senators and scored nine goals and 31 points as he helped the group to Game 7 of the Eastern Conference Final.

The 33-year-old Thompson is a gritty two-way player in his first year with the Senators after spending the last three seasons with the Anaheim Ducks. He has four goals and 11 points this season.

Acquiring Thompson would help the Kings replace Shore while Phaneuf would help solidify the Kings; defense. Thompson has one year left after this season at $1.65 million as a salary cap hit.

Los Angeles now has $3,315,053 of projected salary cap space according to Cap Friendly.

In the process the Kings were able to unload the 36-year-old Gaborik and his $4.875 million salary cap hit, which they would have had to pay over the next three seasons. Gaborik has 14 points in 29 games this season as he struggled to find a spot in the lineup.

Though he played an integral role in the Kings’ 2014 Stanley Cup run with 14 goals, he couldn’t seem to find his rhythm after he signed with LA that summer. He played a total of 227 games with the Kings and notched 120 points. He did not play more than 69 games in a single season for the Kings.

The 25-year-old Shore has four goals and 11 assists this season. He played 220 games for the Kings and notched 49 points after being drafted by the team in the third-round in 2011.