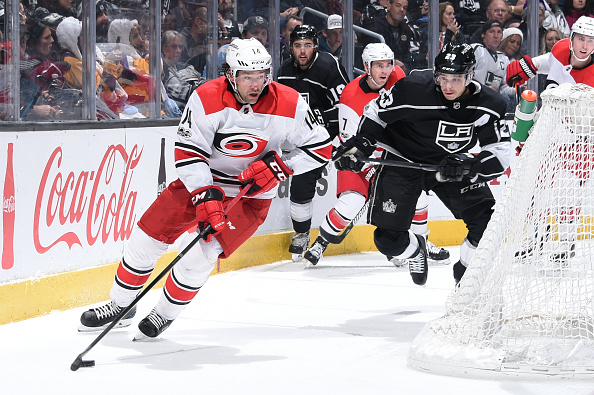 The Kings wrapped up morning skate in advance of their Tuesday game at the Hurricanes at 4 p.m. Pacific at PNC Arena and showed the following lines:

Jonathan Quick was the first goaltender off the ice, indicating him as the likely starter.

Shore’s line has picked up eight points in its last 2 games and has been a big catalyst for the Kings.

“(Shore’s) line just clicked and played well together, so we can certainly look at keeping that together,” Coach John Stevens said.

Forward Dustin Brown is suspended for this game because of a kneeing penalty on Tampa Bay Lightning defenseman Mikhail Sergachev that took place last Saturday. Forward Trevor Lewis is out after he slammed back and shoulder first into the boards after being hit by forward Jared McCann against the Florida Panthers last Friday.

Carolina Hurricanes forward Justin Williams knows why it’s always a big deal when he plays the Kings, rather than any of his other former teams.

This is because Los Angeles was where Williams furthered his legacy as “Mr. Game 7,” won a Conn Smythe Trophy on the team’s 2014 Stanley Cup run and endeared himself to the fanbase with his success on the ice and approachable nature off the ice.

“Listen I had the best success I’ve had as a hockey player playing for the Kings team-wise, individual wise. Certainly nothing to take away from the time I had (in Carolina), just been through a lot more in the seven years that I was in the Kings organization,” he said. “I have a lot of friends that are still there and you forge a lot of relationships and you remember the guys that you win with and I think that’s one of the things that’s kind of kept this going a little bit and makes it a lot more interesting when we play each other.”

The Kings still remember Williams’ impact, even though he left via free agency to the Washington Capitals in the summer of 2015. Williams signed with Carolina, where he won the 2006 Stanley Cup, this past summer. He started his NHL career as a member of the Philadelphia Flyers.

“He’s obviously just a terrific human being, terrific player and it’s not often you talk about guys who have the ‘it’ factor. He’s got the ‘it’ factor,” Stevens said. “He’s got that ‘cold water in his veins, pressure makes him better, loves the moment, loves the game, makes people around him better.’ We were fortunate to have him as long as we did. I’ve known him since back in my Philly days. There’s a reason why guys like Justin win. It’s because he has the ‘it’ factor.”

The 36-year-old Williams has brought his winning swagger to the Hurricanes, a young team looking to break through. He has 34 points in 56 games played as he has helped Carolina recover from a tough start to get back into the playoff race. The Hurricanes enter Tuesday’s contest against the Kings in the last Wild Card spot in the Eastern Conference.

“The thing is I’ve been here when things have been good, so I know how good they can be when this team is winning and you can kind of make this a hockey city even though it’s a college basketball town. The good times can be good and we’ve fallen on a few hard times here the last few years and this team is ready to make that next step, ready to make that jump,” Williams said. “It’s eerily similar to when I came in when I first got traded here. They had a little bit of success and we obviously won the whole thing but I feel as though this city deserves to get there again and I want to be there when it does.”

Also, check out this sweet video of Williams with the Harlem Globetrotters …

– Forward Tyler Toffoli sported a small gash on his lip after taking a stick to the face in practice Monday.

He said he felt OK and just needed a few stitches to close the wound.

“Well, obviously it didn’t feel very good (at the time) but it’s fine now. It is what it is,” he said.

Toffoli has been relatively snakebit for a while. He is in the midst of a 13-game goal scoring drought and has one assist over that stretch. The last several games he has had a bunch of chances, but hasn’t been able to convert.

“I like where my game’s at. I feel like I’m doing some really good things so I’m not really too worried about anything,” he said. “Just trying to obviously score goals but at the same time play good hockey and play the right way.”

– The possibility of Gaborik being on Adrian Kempe’s line means the winger could find himself with more scoring opportunities. Gaborik has played in two games in the month of February and hasn’t scored in 11 games, his last tally coming on Dec. 30, 2017.

In the Kings’ last game – at the Tampa Bay Lightning – he played 7:35, the lowest total of the season.

“(Brown is) suspended and obviously hopefully (I can) get back into a groove and play better. Obviously I need to be productive and play all-around hockey and that’s what I want to do,” Gaborik said.

– The Kings’ three-day stay in Raleigh is their longest of the road-trip, and many players were able to get in some rest before they head off to Pittsburgh following tonight’s game. Los Angeles plays every other day until a back-to-back in Chicago and Winnipeg to end the trip.

“We all get to hang out and kind of bond a little bit together so I think that’s kind of good for the team and it’s always a good time,” Toffoli said. “We have a really good group of guys, so it’s fun and now we have to get back to work.”