Waking up with the Kings: February 11 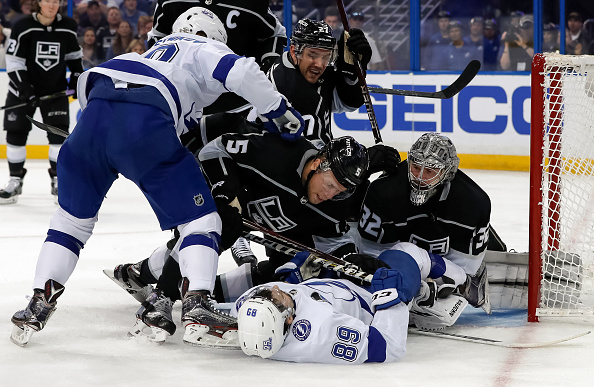 Last night the Kings played a solid road-game, had a dominant third period but fell short against the Tampa Bay Lightning, losing 4-3. In some sense the game provided some optimism because the Kings battled back from down 4-1 – and also down a forward because Dustin Brown received a five minute major and game misconduct for a kneeing penalty to Mikhail Sergachev in the second period – to get super close to tying it up. They also fired a season-high 47 shots on goal. But on the other hand the team did indeed go down by three goals against a quick and opportunistic Lightning team. That’s a group that makes the opposition pay if they have time and space. There’s a reason why they have the most points in the NHL. Overall, it was a strange postgame in the sense that it was a loss that didn’t feel like a loss but more like the team at least got a point even though it didn’t. Players and Coach John Stevens were upset but they seemed to be OK with their effort. That third period felt like a real ‘empty the tank’ situation.

The line of Nick Shore, Andy Andreoff and Jonny Brodzinski again provided major contributions. They scored another goal and had five points between them. That trio has provided some solid secondary scoring for the group of late. Anze Kopitar played a total of 18:23 the last two periods and seemed to control the pace of the game in the third especially. His game may be remembered for Andrei Vasilevskiy’s backhanded glove save on his first period chance, but Kopitar – at least in my opinion – was the best position player on the ice for both teams. Jonathan Quick has been excellent for the Kings in their last two games. After Darcy Kuemper was pulled, Quick helped give LA a chance by making 13 saves on 14 shots on goal. In his last two games, Quick has a .960 save percentage. The team’s starts have been an issue all year – the Kings have scored twice as many goals in the third period as they have in the first – but at least this lends to them never being out of a game. Lastly, the Kings have been incredible in drawing up those last-second offensive zone plays off faceoffs. They almost got another goal with time running out in this one — like their win in Boston earlier in the year.