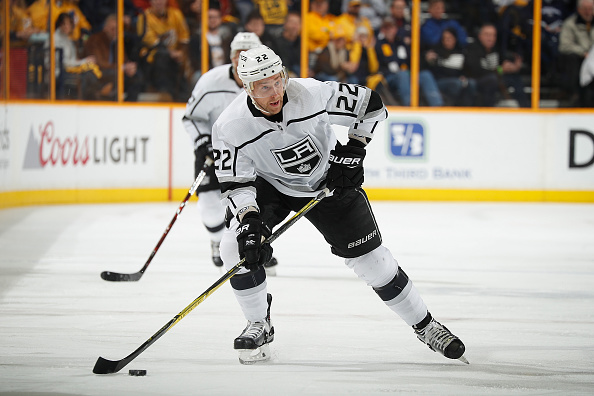 Kings Coach John Stevens spoke with reporters about an hour ago in advance of tonight’s game at the Tampa Bay Lightning and gave an update on the status of forward Trevor Lewis.

Stevens said that Lewis, who exited Friday’s game at the Panthers in the third period after slamming into the boards following a hit by Florida forward Jared McCann, had flown home to be evaluated by the Kings doctors.

Lewis stayed down for several minutes before being helped to the ice and to the bench. He then walked into the locker room under his own power.

Below are quotes from Stevens on Lewis and how the team will try to replace his all-around game along with some other topics.

On Trevor Lewis’ status:
(Lewis) flew home today. He’s going to get further evaluation. He got banged up pretty good there last night. It was kind of a scary looking it so he’s not available.

On the hit where Lewis was injured:
This is my take and I’m just being honest. When I looked at it, the kid caught him from behind and tried to get in front of his side so I wouldn’t say it was boarding in the sense that he hit him from behind. But I think he knew what he was doing. Like I just saw that play, as a player, you know that’s a very dangerous situation where a guy is shooting a puck, getting close to the goal-line, I just … I had a bad feeling watching it. It was just one of those plays you don’t feel good about. If you watch it for the letter of law it might come out as legal, I just thought it was dangerous and I think because players, you have a responsibility sometimes … (Lewis) didn’t see him coming. He kind of got hit as he was releasing the puck and I just don’t like to see that. (Lewis) is an honest guy that’s got good awareness on the ice and that’s the kind of a situation you don’t see a lot but I didn’t like it just because it was a dangerous play that I thought could have been played differently.

On the difficulty of not having Lewis in the lineup because he does so much:
It’s a big hole in your lineup. Sometimes you lose a guy that gets all kinds of accolades, although Lewy’s got them this year, he’s got 13 goals and plays in all situations but he’s a leadership guy, he’s a glue guy, he’s a detail guy. He just plays the game the right way all the time so we’re going to have to fill his ice-time by committee. There’s other guys that’ll always want more ice-time. There are guys that are healthy that want to come in. He kills penalties, he plays the power play so there’s opportunity there. It’s ‘next man up’ with a real good opportunity to take advantage of ice-time and pick up for Lewy when he’s out.

On having depth and if he looks at his opponent in how he determines who gets inserted into the lineup:
It’s more about our team, I think. You’re certainly aware of the team we’re playing but (Gaborik) is a guy that’s been out and plays the left and right side. Amadio has been kid that’s come in and played center for us and played a little bit of right wing. Mitchell is a guy that can play wing or center. I think we have options there but at the end of the day we do look at the situational ice-time that’s been vacated so we’ll make a decision based on that but again the guys that haven’t been playing, Amadio and Gaborik, have come in and helped us at certain times during the year and we expect them to do the same tonight.

On Derek Forbort and how he has played the last two games:
I think Derek’s strength as a player is his ability to defend the rush with good gaps and kill plays down low and that’s a big reason he’s been a good complement for Drew. We separated those guys for a while but we put them back together and I think you have to give Drew some credit he just seems to have an ability, if you go over the partners he’s had over the years, he makes people better that play with him and I just think Derek has a really good skillset that complements Drew. Drew is really good with the puck. He likes to activate on the rush, Derek is really good at receiving the rush. You know they’re going to play against top guys. He’s probably an underrated shot blocker to be honest with you. He’s got a good stick on the penalty kill. He plays important minutes. He’s not a flashy guy but he gives you solid minutes and a good complement to Drew.

On having left-shot, right-shot defense pairs since Paul LaDue’s call-up and if that helps:
We had a long conversation about left-right, I think (Martinez) is a guy who can play left and right. I think (Martinez) is a guy that has become very comfortable on the right but there are certain situations that are advantageous to being on your own side and I think there are other situations that are advantageous to being on your off side. I can think about situations where you’re on your off side going back for the puck, you take it off the wall, you take it on your forehand as opposed to your backhand and there’s other areas when you get a pass and you’re trying to go to the weak side of the ice whether it’s a breakout or transition. Sometimes you get pushed to your backhand, which makes it difficult. The puck’s coming around the wall in the offensive zone and you have to get off … and (Martinez) is actually really good at it but at the same time when he’s able to get up ice with his feet going forward and the puck on his forehand I think he has the ability to create more and move pucks quicker and make more plays. We feel good about him on either side but I do like the look of the lefty-righty as of late. (LaDue) has come in and played well and gives you the ability to kind of spread the ice a little bit to move pucks quickly to speed and it allows you to spread the ice in the offensive zone a little bit, hopefully open up lanes to get pucks through to the net.

On the evolution of LaDue’s game:
If I could just phrase it quickly, it’s probably that he plays a lot faster. I think he’s a good defender, I think he can receive the rush and he’s tenacious down low but I think his puck play has been a lot faster. He sees plays, he’s either making plays with his feet by taking ice or he’s making plays to speed by moving the puck and I think that’s been a big improvement in his game.

On when he may have another update on Lewis:
Docs are going to see him tomorrow. I think he’s going to be fine but we’d rather have our people have their eyes on him. He’s not going to play today or tomorrow so we thought it would be best just to get him thoroughly evaluated and then see exactly what the plan is moving forward. He could meet us on the trip, my suspicion, but that’s just my suspicion. Until we hear from the doctors I don’t know.