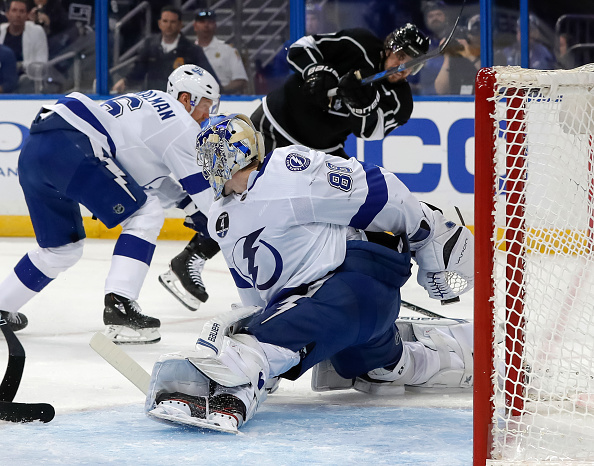 Anze Kopitar, on whether the team’s third period showed the resiliency of the group:
Yeah, I think we should be very pleased about our third period. I think going into the third period, being down 4-1, it could easily just kind of mailed it in and go about our business and not really care too much. But we showed character again and we came back, but just ran out of time. I thought the third period was good. I think we were creating chances and you know just fell a little bit short.

Kopitar, on what he saw on the play when Andrei Vasilevskiy made a backhand save:
I saw he had some net open. I also saw the puck stop, but then at the last second I also saw that glove so you know he made a really nice stop obviously.

Kopitar, on whether he said something to Vasilevskiy after the game:
Yeah I did yeah. [Reporter: Care to share?] In my opinion he got a little bit lucky on a few plays so I told him to go buy a lottery ticket.

Kopitar, on Vasilevskiy having to make a buzzer-beater save:
Yeah I mean even the couple plays before, I think it was Adrian that had a nice little tip, but he kind of tipped it right into his glove. He made the stop or he’s going to say he made the stop. People are going to say we hit it right into it. No, I mean he was solid. All credit to him for sure. He made some really nice stops, even in the second period. Even though we weren’t dictating tempo, we still got some chances, but he was there to stop them. So kudos to that.

Kopitar, on whether fatigue was a factor after Brown left the game:
Everyone’s doing good. It’s actually not hard at all. You’re going in there, you’re in the game, you know there’s what? Ten or seven minutes left? And you just keep on pushing and pushing and pushing, especially knowing you have a couple days to rest. So it’s really not a big deal.

Kopitar, on whether the players ever think that it’s just not going to be their night:
No no. you know that happens more often than not in hockey. Yeah, well you go down and the goalie makes a really nice save. Usually a couple plays later there’s a goal at the other end. So that happened to us unfortunately.

Drew Doughty, on how the team was able to adjust and battle back in the third:
Well, we killed the entire second period so I was actually shocked at how good of a third we had because we were all gassed. When you have to kill nine minutes in the second or something like that, you could just see how tired the guys were from killing. So I was shocked at how well we played in the third, but I’m not shocked at the same time because the team has a lot of resilience and we never give up.

Doughty, on what he read on the last play where he had a one-timer off the faceoff win:
You’ve just got to get it off as quick as possible. I tried to go blocker side and I had to get it through a couple guys too. And you know, that part’s kind of just luck because I don’t have time to pick up my head and see where I’m shooting. So the goalie didn’t see it either, he just got lucky on the save. Well, he was in a good position so not completely lucky.

Doughty, on whether the strong third period will carry over to their game in Carolina:
I don’t think so. You know you’ve got to remember the good things that you did from it, but we lost and that’s the bottom line. Doesn’t matter how good we played in the third, we lost the game. You know, I honestly think we could’ve won that game so it’s frustrating.

Doughty, on whether he was on the ice for Vasilevskiy’s backhand save on Kopitar:
Yeah, but I was at the top of the blue line. But we saw a couple replays of it. Couldn’t really tell if it was even going to hit the net. It could’ve went wide on the right side too. But then some other chances we had to tie it up in the third, he made bigger saves than that one. So some of those deflections and some of those shots on the power play with the rebounds, he made some big saves. Their goalie played really well.