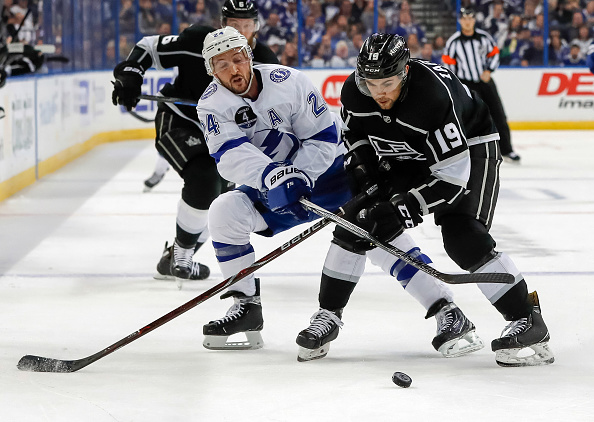 On the way the team battled back after being down 4-1:
The team played hard tonight. We asked our guys to come in here against a good hockey team and play the game the right way. I thought for the most part we did. They’re a very opportunistic team. A turnover early and then a quick play to the net hurt us. I thought we were chasing the game a little bit but I think the guys played the game, for the most part, I don’t think a couple of guys that we needed tonight that weren’t quite up to par but for the most part I thought our guys showed a lot of resolve playing the game the right way and sometimes you lose when the clock runs out on you and tonight I thought the clock ran out on us because I thought we did some good things, especially towards the end.

On the power play:
I thought as the game wore on it was a quicker puck, attention to shoot the puck, people around the net, some good puck recovery and I think that’s the key for us is execute with pace and have some good structure, if we didn’t make plays but really have a shooting mindset and an ability to cover pucks and I thought we did a good job of that.

On the Andy Andreoff, Jonny Brodzinski, Nick Shore line:
They’ve been terrific. (Shore) has been out of the lineup for a few games there and comes back in and has really played with a lot of pop and given us a lift. That line has been real solid for us with momentum. They win a lot of loose puck battles and create some offense for it. I thought (Shore), (Brodzinski) and Andy really gave us a lot of life tonight.

On Vasilevskiy’s backhand save on Anze Kopitar:
Behind his back? [Reporter: Yeah] It was just a good play, put the puck back at the net and good goalies make saves on effort, we know that. We’ve seen that with our guy long enough but that kid’s a talented guy but he made a save on effort there, so did all the right things but a heck of a save by the kid.

On the last play being drawn up perfectly but not going in:
You hope it doesn’t come down to that but (Kopitar) has done a good job of winning draws and we figured we’d get three right shots out there, regardless of where the puck sprays somebody’s got an opportunity to shoot it. We need to win the draw clean, which we did, and we gave ourselves an opportunity, so a tough one to give up four. You don’t want to give up four goals. It’s tough to win when you give up four but again I thought we did a lot of good things that we need to build on.

On the decision to put Quick in the game and pull Kuemper:
I just thought we had to change the momentum a little bit there. Johnny played really well yesterday, just needed to create a pause there and just, I thought we were doing a lot of good things but again, any opportunity they had, they capitalized on and we didn’t so for me that was a momentum thing.

On why the Kings play so well in the third period vs. the first two:
Again, I think every game is different. I know there’s been games this year where we’ve gotten behind but the one thing with this team is they’ve had the ability to battle back. Obviously the third period is a real sense of urgency when you’re down so I think that contributes to it, but we’d like to have that same sense or urgency to start the game but having said that I thought we did tonight. I thought they were going to come at us hard, which they did. I thought we weathered the storm a little bit there but then we got going. You need to start the game the right way, you need to let the puck do the work for you and you need to play with the sense of urgency that we did in the third period.

On being in an adverse situation with Brown out and killing all the second period penalties and still having that type of third period:
There’s a reason the guys in that room have won before, guys like (Kopitar) and Drew, (Quick), they know how to win. They see an opportunity – I thought that second goal I thought was big for us and then we had a real big push on there. But again, at the end of the day I’m happy that we played the game the right way and played with a lot of effort. We have to clean some things up there. When you give up four goals you’re going to have a tough time winning. We know that, but I thought we played the game the right way and played the game hard and we need to build on that.