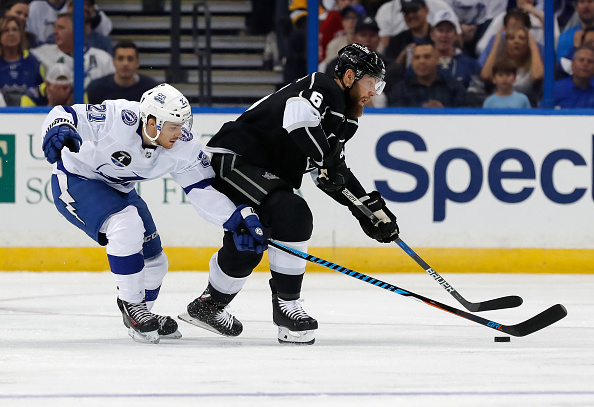 – Anze Kopitar’s three-game goal scoring streak was snapped, but he notched an assist and now has 19 points in his last 16 games. He also took part in 26 faceoffs, winning 14 of them.

– The Kings’ three-game winning streak was snapped. Los Angeles is 5-2-0 in its last seven games.

– Dustin Brown received a five-minute major and game misconduct for a kneeing penalty against Mikhail Sergachev at the 14:30 mark of the second period

– Darcy Kuemper’s outing of 23:12 was his shortest start of the season. He allowed three goals on 14 shots on goal. Jonathan Quick stopped 13 of 14 Lightning shots on goal he faced in relief of Kuemper.

– The Kings fired 47 shots on goal, their most of the season. Their previous high was 45 set at home against the Calgary Flames on Oct. 11.

– Derek Forbort notched an assist and now has four helpers in his last two games.

– Kyle Clifford scored his second goal in his last three games. He has three on the season.

– Christian Folin scored his third goal of the season, which set a career high.

Sunday is an off day for the team. The Kings will practice Monday in Raleigh, N.C.