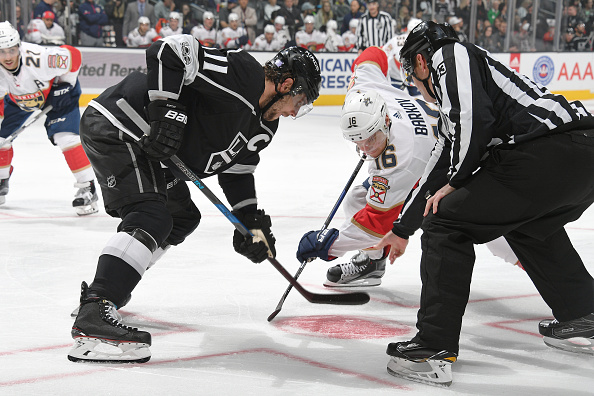 On who Panthers center Aleksander Barkov reminds him of:
(Kopitar) to be honest with you and Draisaitl, those kind of guys that are big, heavy guys that are extremely skilled and good vision, plays big minutes. I think both he and Trocheck combined, I think they play just under 44 minutes average on the year, which is probably more than any other two centers in the league. Certainly something we have to be aware of as a group. I don’t think you’re going to get a direct match-up even if you wanted it because they play so many minutes. You just have to be aware of them I think. He’s a big, heavy guy that has a really well-rounded game and probably is as physical on the puck as any player in the league so he poses a challenge.

On if anyone close to Barkov’s age is as advanced as him:
I’d say Draisaitl is probably the guy that comes to mind. I think Draisaitl is an impressive guy. He’s got size, he’s learned to be good in the faceoff circle, he’s heavy on pucks, he can shoot to score, he can make plays and those are the young players that come to mind and if I was a young guy like that I’d be trying to emulate Anze Kopitar. He has been doing that for a long time. He’s had a lot of success doing it and learned how to win. They seem like they have a similar makeup of their game that might mirror games like that.

On managing the back-to-back after a long flight and the fact that tomorrow’s game at Tampa will start late because of Vincent Lecavalier’s number retirement:
We’re just looking at tonight to be honest with you. We looked at the schedule and met with the staff and we traveled yesterday, had an active warmup for the guys when we got in just to get their bodies moving a little bit and a meal planned when they got in, just to make it as convenient as possible and get as much rest as they can and then it’s time to get quickly adjusted here today just with the three-hour time change is a quick shift with only one day between (the last game) and when we play but today’s big focus is on today. I think on the road, in any situation let alone a back-to-back situation, you need to all four lines going you need six D you need to play a smart road game, you need to manage the puck early and you have to be ready to compete. Florida has played really well as of late. They’ve been on a big of a roll here and we know they’re feeling good about their game so we know we’re going to need a good start in this building.

On if it’s hard to not think ahead to the rest of the seven-game road-trip:
No not really, I mean I think it’s all part of preparation and we’ve really tried this year to talk about our own team. We don’t talk about the team we’re playing until gameday. Make sure we’re aware of our opponent and the lineup personnel and tendencies but our focus is on our game so this group has done a really good job of understanding – we have four big trips a year every year – this is a little bit of a longer one. They’re anywhere from four to seven games. We know that. We know how important those trips are. We know how important back-to-back games are and we know how important games in the division and the conference are. This checks that first game of a long road-trip and it’s important to get off to a good start but I think this group has done a good job of focusing on the task at hand the day that we’re in and then we’ll get ready for tomorrow after this one’s complete.

On how long road-trips in February seem like a tradition with the Kings:
It’s still tough. The trips are tough. You get a back-to-back at the front end and the back-end but at the end of the day, this team has been good on the road. I think the preparation is key whether you’re at home or on the road. I think we do a good job of making sure the guys get what they need in terms of opportunity, resources to recover, travel, when they’re eating, what they get. Really try and check all the boxes and make sure that they have everything they need at their disposal to be good players on a nightly basis. Just because we’re on the road for an extended period of time we still make sure that they have what they need on the road to be best prepared to play.