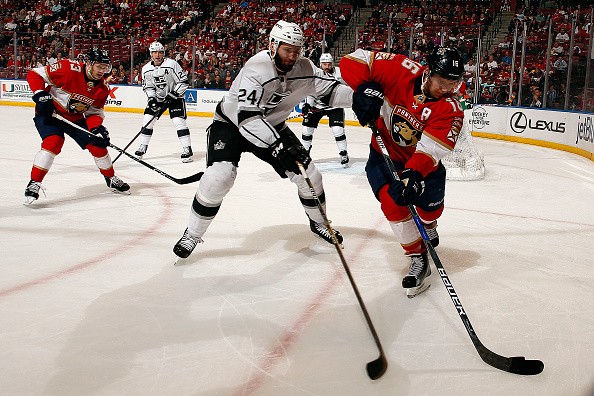 – With their 3-1 victory over the Panthers, the Kings have now won three straight games. In those contests they have allowed a total of three goals. They are also 6-2-0 in their last eight contests.

– Jonathan Quick picked up his first win since Jan. 21. It was the 12th game this season where Quick allowed fewer than two goals. He made 35 saves.

– The trio of Jonny Brodzinski, Andy Andreoff and Nick Shore scored two goals – including Brodzinski’s game-winner and were a combined plus-5 between all three of them. It was also the first game-winner of Brodzinski’s NHL career.

– In his first game back from a lower-body injury, Alec Martinez had six blocked shots. He now has 150 on the season, which ranks second in the NHL behind Edmonton Oilers defenseman Kris Russell who has 160. Martinez’s 3.1 blocks per-game rank first amongst players who have played in at least 40 games.

– Anze Kopitar has picked up a goal in three straight games. This is tied for his longest goal-scoring streak of the season. In his last 15 games, Kopitar has 18 points.

– Derek Forbort’s three assists tied a career-high previously set on Nov. 8, 2016. It was his first multi-point game of the season. Forbort led all Kings players in ice-time with 24:58.

– Alex Iafallo notched an assist on Kopitar’s goal. He has a three-game point streak and five points in his last five games.

The Kings have a game Saturday at the Tampa Bay Lightning, which will start at 4:50 p.m Pacific time because of Vincent Lecavalier’s jersey retirement ceremony. The game is listed as having a 4 p.m. start time.