February 9: Martinez available, Quick off ice first, how to pack for a seven-game road-trip 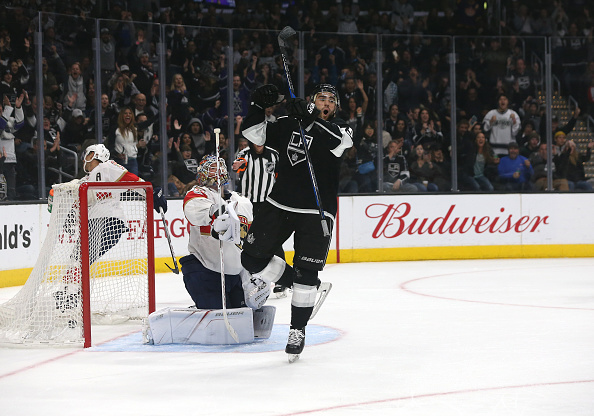 Earlier, the Kings went through morning skate at BB&T Center in Sunrise, Fla. in advance of tonight’s game at the Florida Panthers and showed the following lines.

Jonathan Quick was the first goaltender off the ice, which indicated he could make his first start since Feb. 1. In his last eight appearances Quick has gone 1-7-0 with an .874 save percentage. Before then he was 19-11-2 with a .929 save percentage. Darcy Kuemper has started three of the Kings’ last four games. Over Kuemper’s last five appearances he has posted a .969 save percentage, a 1.17 goal-against average and two shutouts.

From what I could see Marian Gaborik worked with the fourth line while it seemed like Mike Amadio and Kevin Gravel were out of the rotation.

Coach John Stevens said defenseman Alec Martinez, who has missed the last two games with a lower-body injury suffered on Feb. 1 against Nashville, was available to play. Martinez returned to practice Monday.

“I feel good,” Martinez said, noting the decision to put him in the lineup was up to Stevens.

“I wasn’t really out that long. I don’t think you lose a whole lot. I got four days of practice in I think it was. Like I said, I feel good,” he said.

– Friday’s game marks the first of a seven-game road-trip that starts in South Florida – one of the NHL’s warmest locations – and finishes in one of its coldest at Winnipeg. Along the way the team will stop in Tampa, Raleigh, Pittsburgh, Buffalo and Chicago. The long trip, plus the variation in temperatures from beginning to end of the voyage made for some packing difficulties with the Kings players.

“I pretty much gave up the other night trying to figure out what to bring. We go from Florida to Buffalo to Winnipeg, I don’t know where else we go … I just packed a bunch of clothes and hopefully it works out,” defenseman Jake Muzzin said. “Just make sure you have enough underwear and enough toothpaste to last you and everything else you can mix and match on your way, but it’s tough. You have to bring a winter coat and then a summer coat or whatever so I mean it is part of the game.”

The players understand that on this trip specifically they need to eat well, stay hydrated and get plenty of rest in order to stay healthy.

“That’s something you will learn through the years with a lot of travel and a lot of games, you have to stay healthy and have good preparation and everything,” forward Adrian Kempe said. “We have great food everywhere on the plane and everything so that helps a lot and you have to rest and prepare for every game.”

Stevens noted that having that type of roster flexibility is crucial during this time of year.

“I think for us we need to take advantage of that depth and when guys are out they have to be ready to play and when they come in they have to give us a boost,” he said.

– NHL.com’s Lisa Dillman wrote a piece on goaltender Darcy Kuemper making the most of his opportunity at the Kings’ backup netminder.

– Captain Anze Kopitar had a nice tweet for Team Slovenia as the 2018 PyeongChang Olympic Games start.

Good luck to my boys @lovehokej and the rest of @TeamSlovenia in #PyeongChang2018!!!

– In case you missed it, Andy Lassner, executive producer for “The Ellen DeGeneres Show” and Kings mega-fan, made an appearance on last Saturday’s broadcast.

Look who decided to stop by! Hey @andylassner you could have a future as a broadcaster for the @LAKings! You're a natural! Thanks to @ericstonestreet for stopping by too! @patrick_oneal 🏒👍⭐ #GKG pic.twitter.com/YZNOfOYbjE