Stevens on keeping momentum, standings, not looking ahead to road-trip 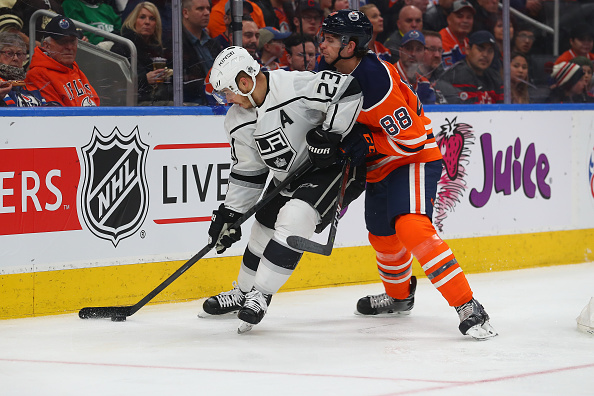 Below are quotes from Kings Coach John Stevens after the team’s morning skate in advance of its 7:30 p.m. game at Staples Center tonight against the Edmonton Oilers.

On trying to have the same intensity as the last game:
I think the last three games are a reminder of how we need to play. We played the game the right way in Dallas, whether you win or lose it’s the right way to play and you get the result you deserve and you play the way you can’t play in Nashville against a team that played really hard and played a really solid team game and the result was what we deserved. I thought (Saturday against Arizona) was a good bounce-back game for us against a division team and the same tonight. It’s a team that’s playing well right now. It’s got some confidence, top guys have really got it going so if nothing else it’s just a reminder of how we need to play and the results that we’ve had recently when we play the game the right way.

On teams being bunched together in the standings:
I think there is every year. One thing that I can assure you is you’re not getting in the playoffs with 61 points so it doesn’t matter what everybody else is doing, we have to put points on the board ourselves and take care of our own business here. What’s going on right now is there are too many teams that are in contention so if you’re going to wait around and look for help, it really doesn’t matter what teams around you are doing. It matters what you’re doing, especially when you have games in the division and in the conference. [Reporter: You pegged 96 points to make the playoffs]: That’s what history tells us, but there has been times before where that wasn’t enough so this could be one of those years. I don’t know. But you have to take care of business in the division and in the conference. I don’t think those games are as important, but they’re not far behind.

On not looking ahead to tomorrow and starting the team’s seven-game road-trip:
It’s not hard. I think you’re at home. You’re focusing on the home game. We break the season down into small increments where there’s focus on each game, on our game and we have segments that we try to track, so it’s small picture instead of big picture, but if you take care of the small picture, the big picture will take care of itself. That road-trip is a section all on its own. We look at the start of the year, you have four big trips every year. You want to look at those trips and tackle those as their own little segment, but we focus on our two games at home before we head on the road. We have one in the bank and we have to take care of business on the other one before we worry about the road-trip.

On the recent play of Alex Iafallo and how he responded to being scratched:
Well I just think it was the middle of the season. It was actually one of the Edmonton games we were looking at that he didn’t play. You’re a young guy coming into a season – he had played big minutes for a young guy. The schedule is entirely different than anything he has ever experienced before and we just felt like his game was always based on speed and quickness and puck pursuit and we just thought his game just lacked the energy that was present when he was really playing well. We moved him up and down our lineup and we thought about taking him out for a game. I think it was after the Vancouver game that we decided if we took him out for a game just talk to him about getting his energy back, really focusing on working back to pucks, really good puck pursuit guy and it’s all the little details in his game that make him a really good player and I think the break helped him. That break, as well as the other breaks we’ve had along the way, really helped him get his energy back and play with the tenacity that allows him to be a really good player. He’s not a big guy but he’s hard to play against just because he’s so tenacious on the puck. When the tenacity is in his game, it feeds the rest of his game because he ends up turning a lot of pucks over, he ends up with the puck a lot, he ends up challenging with his speed. We do think he has the ability to score and create some offense for us, but we trust him in a lot of situations. He looks more like that player now than he did mid-season.

On Iafallo saying he sees his position differently after being scratched:
I think he has done a good job of that all year. I think sometimes, and we’ve asked guys that don’t play, to be good students of the game. Don’t just sit out the game. Watch the game. Try and learn from it. It’s a challenge for our young guys learning the league, learning the players, learning the teams. That’s a big part of it but the other thing with Alex is I think there’s times if he works back to pucks and is available early, he’s usually open but if he gets ahead of the play too soon trying to create space he ends up standing still and that’s probably the one telltale in his game that we’ve tried to fix. He has been a lot better at that lately. But like I said, he had a really good first half of the season. I thought there was a little dip around the holiday season, but I think the breaks have been good for him and I think he’s back to playing good hockey, good, sound detailed hockey, which is what we expect.

On trying to stop Edmonton Oilers superstar Connor McDavid:
Just that time and space. I think a lot of his time and space is created on the rush so I think you really have to be aware of your positioning in the offensive zone. You have to be aware of line changes and he likes to get the puck underneath with speed and if you don’t recognize his speed coming underneath it’s too late so I just think you have to have a real awareness of where he is on the ice. I think you have to be a real responsive team in taking time and space out of the middle of the ice and if we can do that I think his o-zone time is set up from his rush play, but it’s easier said than done. Everyone knows who he is. Everyone’s aware of him. They have Draisaitl playing with him again. The chemistry is really good but he can create even when you have five guys checking him. He has speed and quickness. He can turn on a dime. He’s a competitive guy and he plays a lot of minutes. We’re going to need everybody to be aware of him and really ready to compete against him.

On if the Oilers are a different team than the last time they played each other:
If you look at that game, it was a pretty tight game moving through that hockey game and we had that five minute power play we blew it open with three power play goals so I know we all like to look at analytics … analytically their record is better than what it shows.