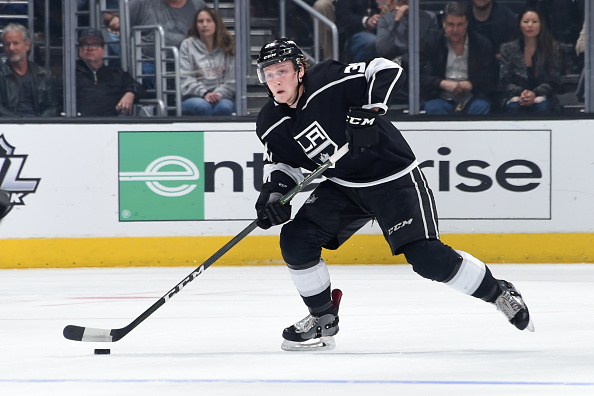 Darcy Kuemper on the second period:
I thought we did a good job defensively in our own zone. We got a bit away from our gameplan and that’s why we spent more time down there and gave them a couple of power plays as a result of being in the D zone for long stretches there. Unfortunately we gave up the lead but we were able to hold it at a tied game and come out in the third and get the win.

Kuemper on some of his bigger saves:
They made some good plays and I was just trying to compete the best I can and was fortunate to make a couple of saves at certain moments there and other than that the guys did a really good job of stopping those passes from getting through.

Kuemper on getting a win after a tough second period and the confidences it gives the Kings going on their upcoming road-trip:
To be able to go into the third tied and win in regulation, that’s huge. The second power play unit stepped up real big there, (Paul LaDue) with a great shot, great screen in front. Then we didn’t really let them back in their zone after that. Just a great team win tonight and great job bearing down in the third there.

Kuemper on if he was upset his shutout streak ended:
No, I wasn’t really thinking about that. I was just thinking about the two points. We got off to a 2-0 lead and just wanted to try not to give them life and unfortunately they were able to tie it up but then we dug in there.

Kuemper on his relationship with Jonathan Quick the last couple of weeks with Kuemper starting more games:
It has been good all year. When he’s playing I’m supporting him and whenever I have chance to get in there he has done a great job of being there for me as well. So nothing has changed and I know it’s tough, going through myself not playing and he’s definitely not used to it but he’s been handling it like a real pro.

Kuemper on having the faith of the coaching staff:
It’s nice getting the chance to go out there and play. It’s always fun every game and it gives me a lot of confidence that they have the confidence to keep putting me in there.

Paul LaDue on his goal:
It was unbelievable. It was a good play by (Gravel) and (Lewis) to get it over there and Tanner was in front of (Cam Talbot’s) eyes and he did a great job there but yeah, it felt unbelievable to get that goal and get the win.

LaDue on the second period:
They obviously gained some momentum in the second. We took a couple of penalties we shouldn’t have took but I thought we came out strong in the third and we executed to our gameplan and it paid off.

LaDue on getting a win before the road-trip:
It’s huge, it’s huge motivation going into this road trip. It was an emotional win and that’s great for the guys.

LaDue on producing at the NHL level:
It has been great and we’ve been winning too and that’s the most important thing. We just have to keep it rolling and hopefully get into this playoff spot at the end of this road-trip.

LaDue on Edmonton’s challenging his goal for goaltender interference:
I didn’t think it was a big deal. Pearson came over and told me he didn’t interfere at all so we weren’t too nervous, but there’s always a little bit of nerves when they’re going over it but I was pretty confident.

Clifford on getting back on the winning track  after last month’s losing streak:
I think we’re just playing our identity. We’re playing LA Kings hockey. We check hard, we get pucks to the net and we’re having fun doing it.

Clifford on his goal:
(Lewis) made a good play, he won the faceoff and you get pucks to the net and it’s as simple as that.

Clifford on the gameplan against Cam Talbot:
He’s a good goalie and you have to take his eyes away and pepper him.