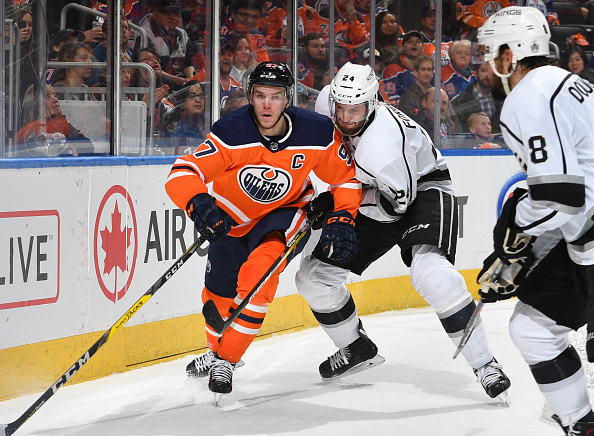 The Kings hit the ice at Toyota Sports Center earlier today for practice as they prepared for their final home game, Wednesday against the Edmonton Oilers, before a seven-game road-trip.

The forward lines were as follows.

Andreoff-Amadio-Brodzinski (Marian Gaborik and Nick Shore were working in the same color-coded jerseys as this group).

Defenseman Alec Martinez again took part in the team’s defensive rotation. It was his second straight day practicing with the group after missing the last game with a lower-body injury. Coach John Stevens didn’t proclaim Martinez ready for Wednesday’s game, but struck an optimistic tone on the blueliner. Martinez noted that he was “feeling good.”

The Oilers should present the Kings with quite a challenge. Edmonton has gone 5-1-1 in its last seven games and superstar center Connor McDavid fired four goals in the Oilers’ 6-2 victory over the Tampa Bay Lightning in their last game.

McDavid comes into Wednesday’s game on a roll with eight points in his last three contests and the Kings need to find a way to slow him down. McDavid’s 61 points in 51 games lead the Oilers and are tied for third in the NHL. His 161 points since the start of last season lead the league.

“You have to tight check on him. It takes five guys on the ice – take away speed in the neutral zone,” defenseman Jake Muzzin said. “I know they tend to look for him and so would we if we had a guy like that. I mean our star players would want the puck in their hands to make the best plays so take away in the neutral (zone) and make him play in his own zone and that’s the best way to eliminate him from getting on the scoreboard.”

Said Martinez, “I think regardless of whether McDavid scored four or not the night before, you take the same approach. It’s no secret how good of a player is. You have to play a guy like that hard. You have to take away his time and space and regardless of what his night was before. You have to focus on shutting him down.”

Though the Kings will be on home ice and have the last change to get a favorable match-up on McDavid, all players will need to be ready to face him if they find themselves against him.

“I just think everyone has to be aware. He is going to get on the ice against other people regardless of where you’re playing,” Stevens said. “Coming out of special teams situation that’s going to be the case. We can’t just ask Drew (Doughty) and (Kopitar) to check guys like Connor McDavid. It’s the responsibility of the entire hockey team to make sure to play the game the right way.”

The Oilers also have a couple of other weapons, like young forward Leon Draisaitl who has 45 points in 47 games this season. Though Edmonton has had a disappointing season at 23-24-6, they can still have most of the same talent from last year’s group that was one win away from making the Western Conference Final.

“It’s not just McDavid. They have other people. Draisaitl is a great player. Their defense are very capable of getting involved in the play and there’s other people in their lineup, just like us when we’re playing well,” Stevens said. “They have guys like (Milan) Lucic and (Patrick) Maroon and (Zack) Kassian that can contribute … (Mark) Letestu – when they’re playing well they can beat you with their team game. Although you have to be aware of McDavid, we’re playing him but we’re playing the Edmonton Oilers and we have to give them respect. They’re well-coached. They forecheck hard and offensively they do things very well so we’re going to have to be aware of all of them.”

Here are a few more notes from practice …

Torrey Mitchell has been pretty hot in the faceoff dot of late. In his last two games he has won 77.3 percent of his draws. In the Kings’ Saturday win over the Coyotes, Mitchell won 13 of 17 faceoffs. In 24 games with the Kings this season, Mitchell has won 54.5 percent of his faceoffs. Since the 2015-16 season he hasn’t held a mark below 51.6 percent.

“I take them very seriously. I try to bear down big time. It’s a big part of my game,” Mitchell said. “I don’t want to give you all my tricks. I think a couple of important … my keys are to focus on being super ready in like a really good athletic position, being strong and trying to time it the right way.”

Mitchell said that if he can win a few consecutive draws on a particular centerman, it can lend to a strong game in the circle.

“If you’re going against the same guy and you win three in a row he’s going into the fourth one overthinking things so he might be trying something new and that’s sort of when you feel like you got him,” he said.

Mitchell’s strong performance on faceoffs has fostered some trust between him and the coaching staff and helped ease the pain of not having the injured Jeff Carter’s ability in that area of the game since the first month of the season.

“He has been very helpful. He gives you another guy in a line that can feel confident and can start in their own zone. He’s been very proficient in the faceoff circle. He has done a good job on the penalty kill for us and I thought that line was really good on the forecheck. He’s a veteran guy that can skate well and plays a really good, solid team game. But faceoffs clearly with Jeff being out, I think that’s an area that he has been a big help for us since he has come on board.” 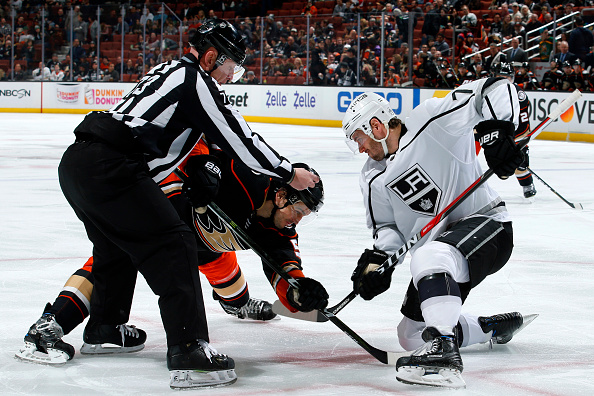