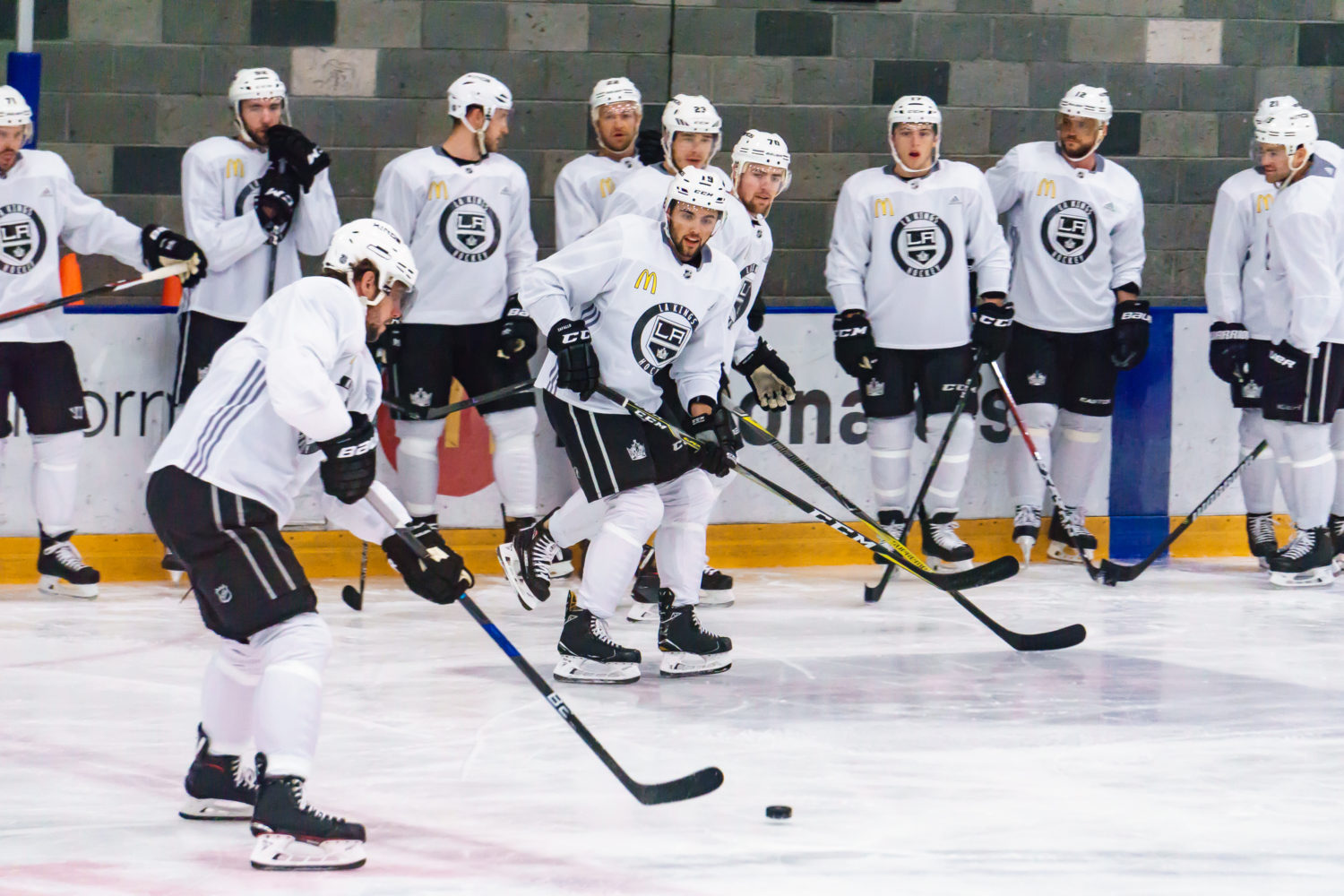 Insiders! A pleasant Saturday afternoon to you. Here’s another friendly reminder that I’m gone beginning tomorrow, and Josh Cooper will take over the site until I return from my Olympic coverage. I’m not headed to PyeongChang, but rather to Stamford, CT, where I’ll be calling the game off monitors from a booth at NBC Sports’ campus. Not sure I’m supposed to be publicizing that, but ¯\_(ツ)_/¯.

Because I’m leaving for three weeks – the first game I’ll return to cover is the February 27 game at Vegas – I’m using most of the afternoon to run errands, pack, and hang out with family at home. As such, barring anything unexpected, this will be the last post before today’s game thread. It’s a fun, jam-packed post combining morning skate notes and John Stevens quotes. You are welcome to share your thoughts below.

::extremely Dave Joseph voice:: The Arizona Coyotes are in town…

And in preparation for the Yotes, the Kings aligned as such at the morning skate:

-The vitals: Darcy Kuemper was the first goalie off the ice and will be projected to start in net against Arizona (7:30 p.m. / FOX Sports West / FOX Sports GO / FUBO TV / KABC 790 / I Heart Radio). Alec Martinez (lower-body) did not skate, though Derek Forbort skated alongside Douighty and confirmed to me in the dressing room that he’s not dealing with any pervasive discomfort; recent days off from the ice appear to have served him well. Marian Gaborik and Nick Shore skated together as an extra defensive pairing, and while Shore left the ice relatively quickly, Gaborik remained on the ice and skated through some extra work. He’s been dealing with some maintenance recently, and missed Tuesday’s game with an undisclosed injury, so I asked John Stevens whether it would be due to an injury, a coach’s decision, or a combination of the two, if he wasn’t selected to play tonight. “We have 14 forwards at our disposal that are all healthy players as an option to play,” Stevens said.

-Their vitals: Antti Raanta was in a frightening car accident en route to Gila River Arena two nights ago in which his car was struck in a carpool lane by an SUV believed to be traveling between 40 and 50 miles an hour. “It was almost like seeing a train coming,” Raanta told Craig Morgan of ArizonaSports.com. He didn’t travel on the trip, per Head Coach Rick Tocchet, and as a result, Scott Wedgewood will draw tonight’s start in net. Wedgewood won his only career start against Los Angeles, the 3-2 overtime win over the Kings in Glendale on November 24. Speaking with a Coyotes video crew, Tocchet confirmed that Jason Demers (IR/upper-body) is still out, while noting that Brad Richardson, who is two points from 200 career NHL points, and Zac Rinaldo will both be game-time decisions, with Richardson sounding like the more likely to go. It’s also the Coyotes’ fathers trip. We remember those!

-Jeff Carter took to the ice before the morning skate as he continued to skate on his own.

Jeff Carter going through a pre-practice workout at TSC. Still no official timetable on his return. pic.twitter.com/hCrrrQHBbt

We’re not quite at the point where the team is able to provide a ballpark on his return.

“I think it’s too early, but I will say that he’s been excited about some of the progress he’s made,” Stevens said. “I don’t think we’ll start thinking that way until he starts to get integrated with the team, even like on a morning skate or if we have an optional with small groups going out there. I mean, he’s still skating on his own. So, I think until he gets to the point where he progresses where he can get involved with some other people on the ice, we’re not going to put any kind of timeline on it. It’s one thing to get medically cleared to get to that point, and then it’s a whole other hockey perspective where you have to get your skating legs and your timing and get involved in drills and all that kind of stuff. Contact, eventually. I think he is progressing. I think we’re excited about some of the jumps he’s made in the rehab this week, but we wouldn’t have started thinking about that until we involved in some sort of team practice.”

-Stevens had the most pointed line of the morning while answering a question of how he’d like to see the lessons of Thursday’s game applied. “Pretty simple for me. We went into Dallas and paid full price to win a hockey game. We went into Nashville expecting a discount, and they weren’t giving any discounts.”

That’s a good way of putting it. He continued, “it’s pretty obvious. You have to pay a big price to win against anybody, and we didn’t in Nashville. We did in Dallas, and we’ll need to tonight.”

John Stevens, on the significance of Drew Doughty reaching 100 goals:
It’s a pretty significant number. In Drew’s case, I think the people who don’t get to see him every day – if you talk Drew, you watch Drew, you understand Drew. I think points are important, one, because it helps the hockey team, but he has a real gdeep passion to be a great defender and keep the puck out of his net, so I see Drew as a guy that can make ad ifference at both ends of the rink, but certainly his ability to produce offense and get involved in the play has always been a part of his game, but I think the fact that he’s such a well-rounded player makes him such a valuable guy.

Stevens, on Arizona’s tendencies:
I think they’ve been in a lot of hockey games. I think that’s been the case most of the year. They’ve got a young team. The Chychrun boy was out for a period of time there. I think that’s helped them with the addition of him on the back end. I think he’s got size and mobility and can play both ends of the rink. I think they’ve got a talented group of forwards there. They have moved Domi into the middle, which I think might be a new position, much like it has been for Kempe, but I think it gives them balance. They’re fast. They like to get going in a hurry up the ice. I think their D are very involved in all three zones breaking the puck out, in transition, and certainly in the offensive zone. And then when their forwards, when they get some separation in the offensive zone, it really activates their defense. I think some of that comes from the forecheck. I think their forecheck is a little different. It’s really aggressive, so if you’re not ready for it, I think it can cause some problems. They have a style lof play they’re trying to instill, and I think they’ve been in a lot of games that have been close and not won, but I still theink they’re a dangerous hockey team where they’ve shown an ability to compete with good teams on a nightly basis.

Stevens, on what a healthy Jeff Carter adds:
He’s an important guy. He’s one of those guys that plays in all situations on both sides of the puck, much like Kopitar. If you’re defensive zone situation, offensive situation, man-up, man-down, goalie-in, goalie-out, he is a guy that can help you in all those situations. He’s got good size, good speed, can score, but he’s a very sound defensive player and he provides leadership for our hockey team. If you had a list, he’d check a lot of boxes. 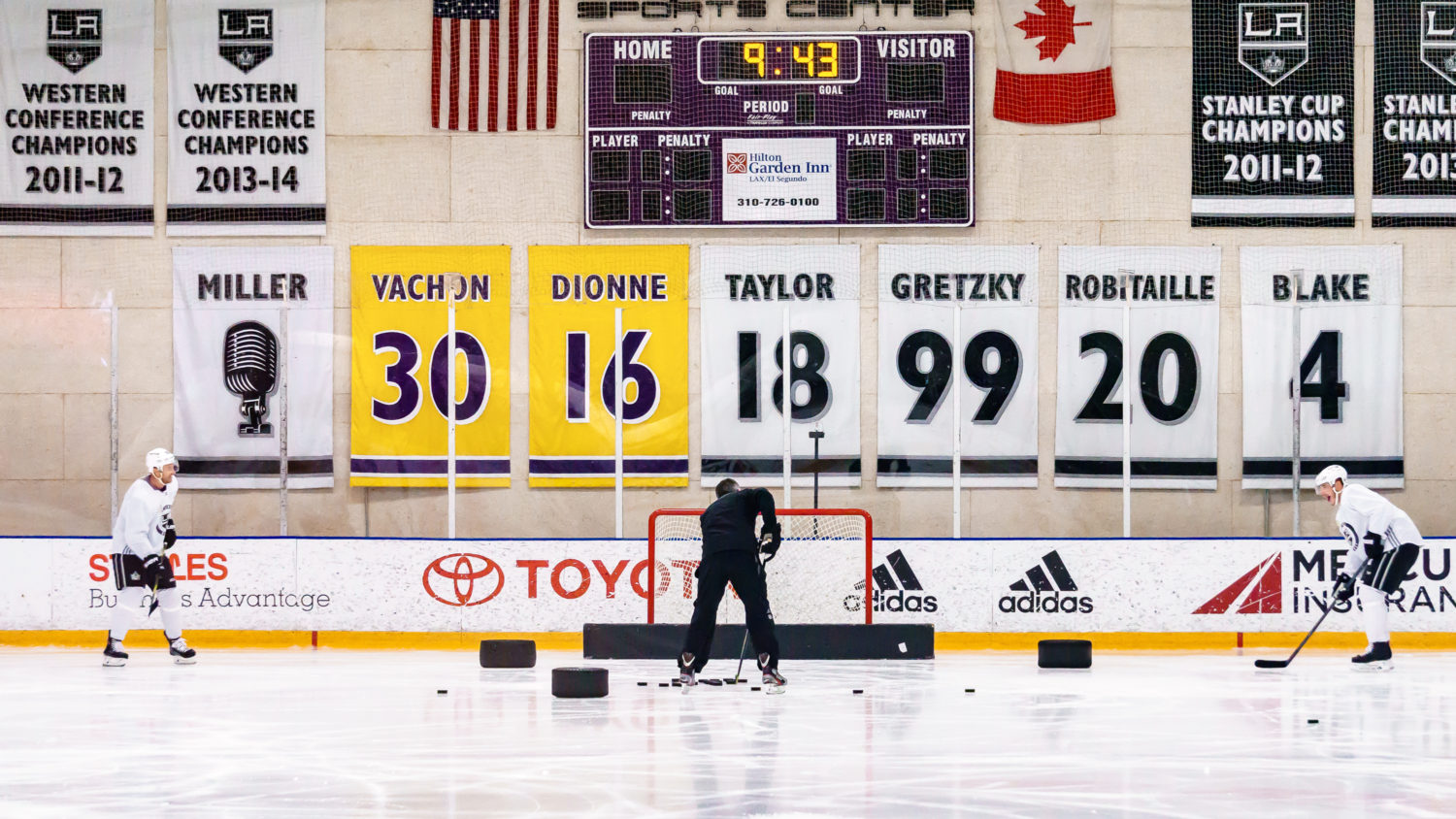 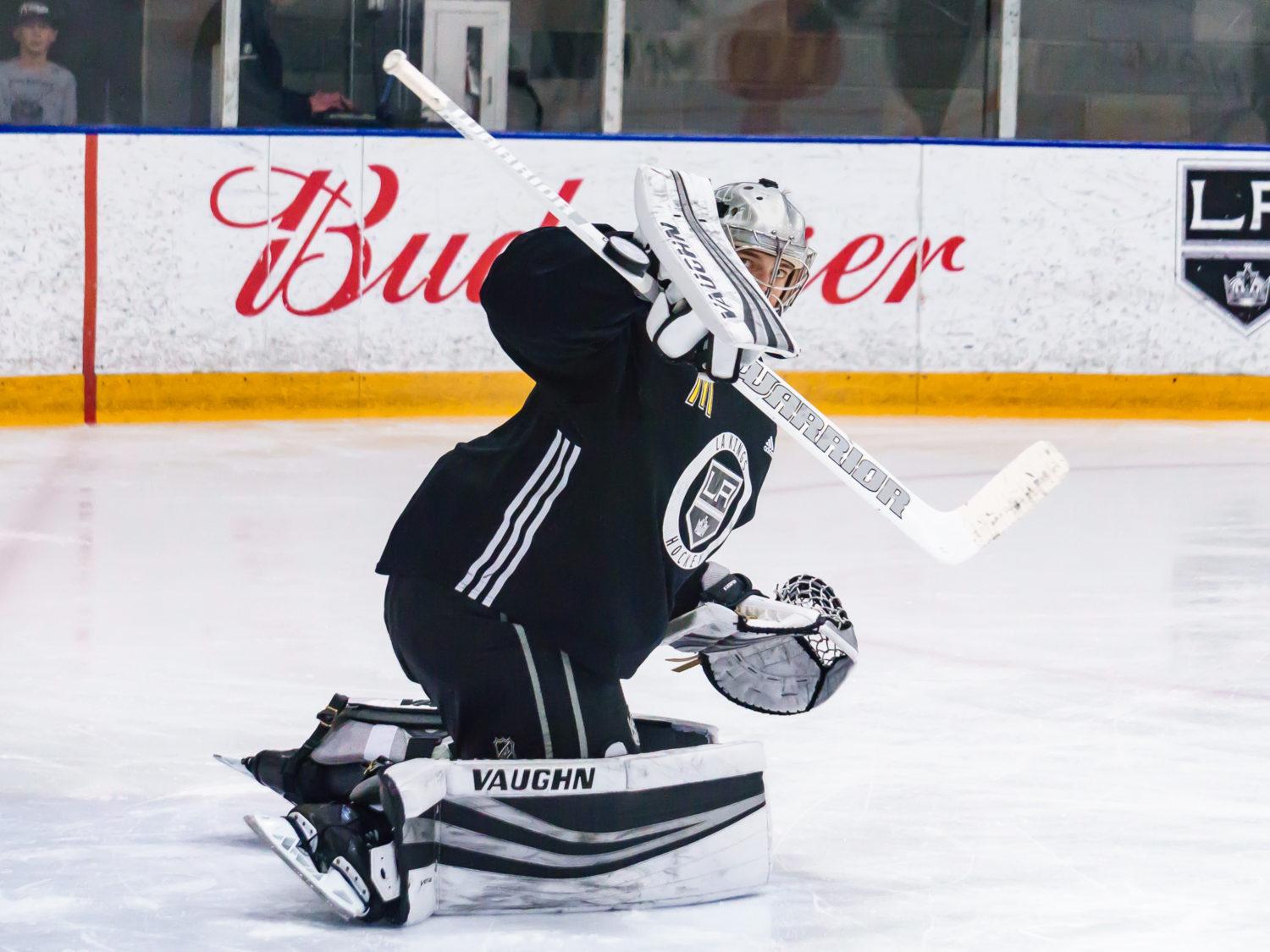 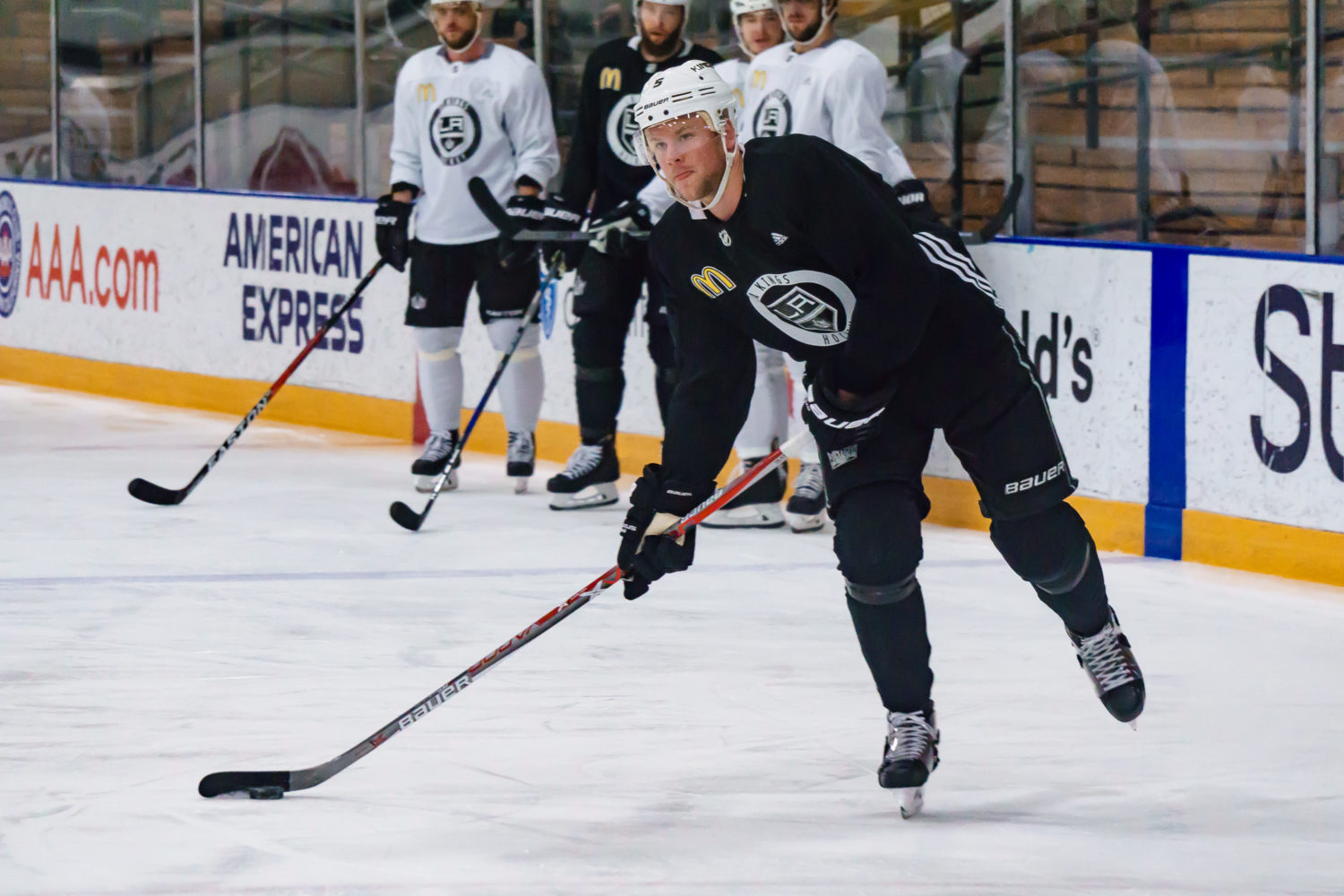 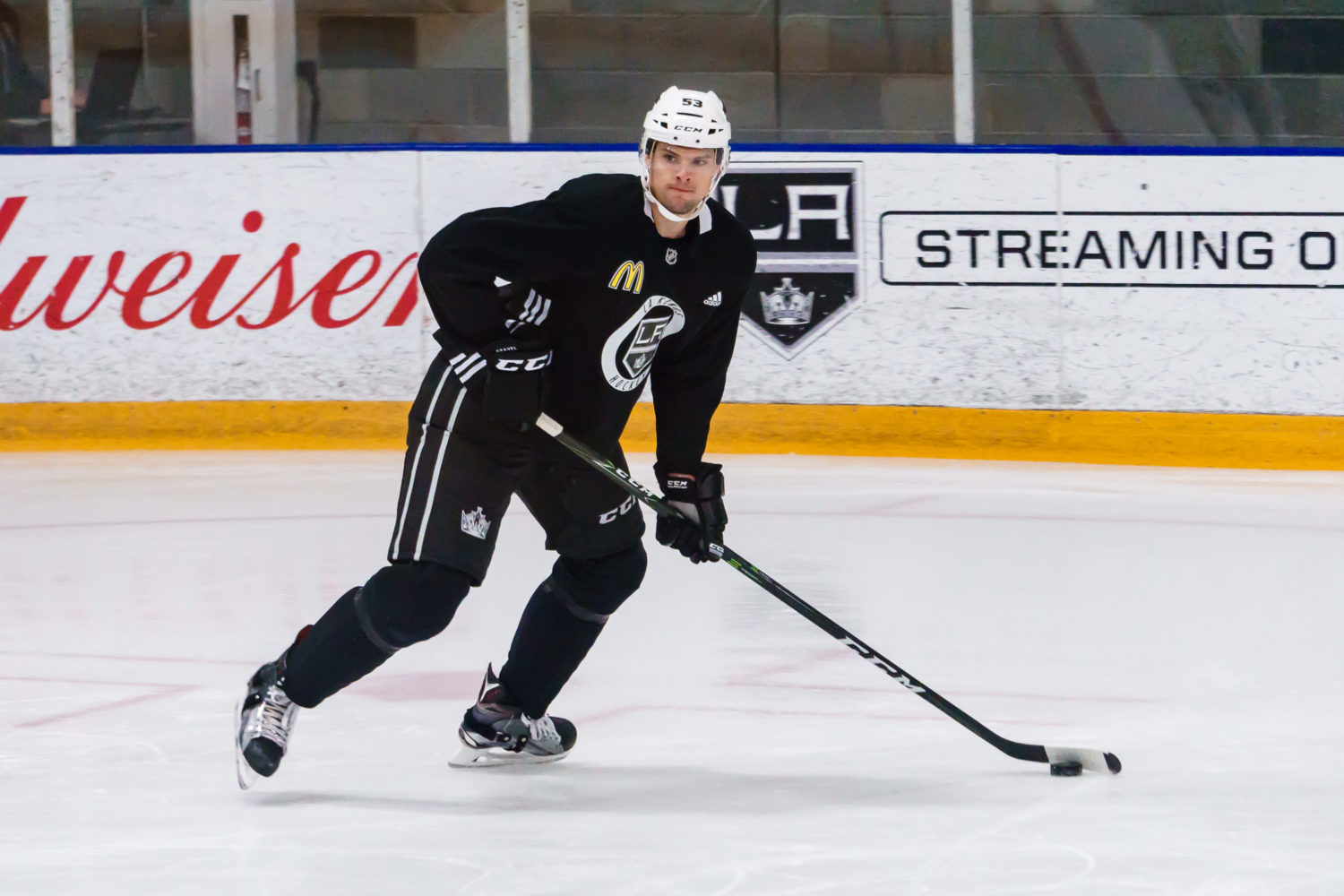 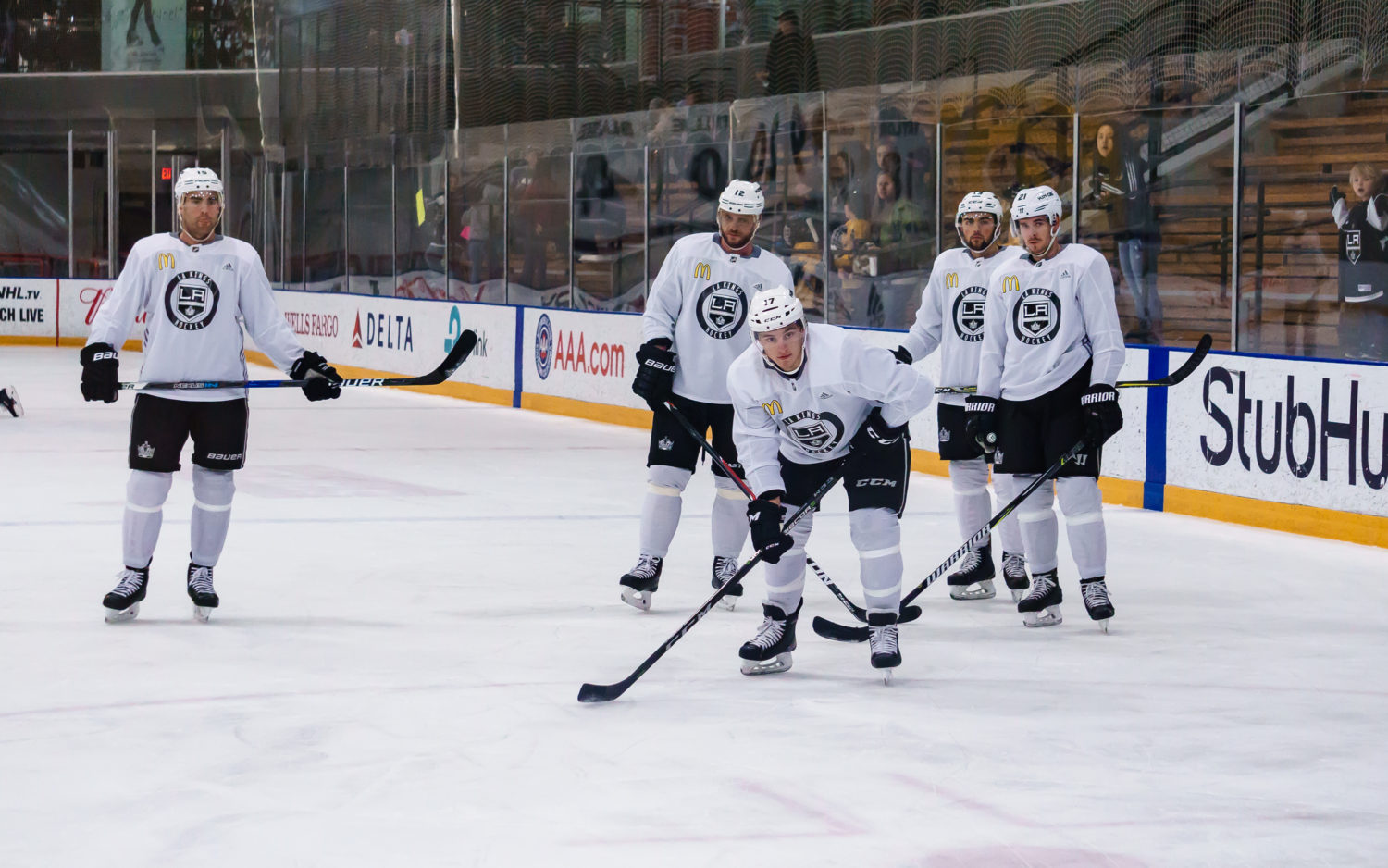