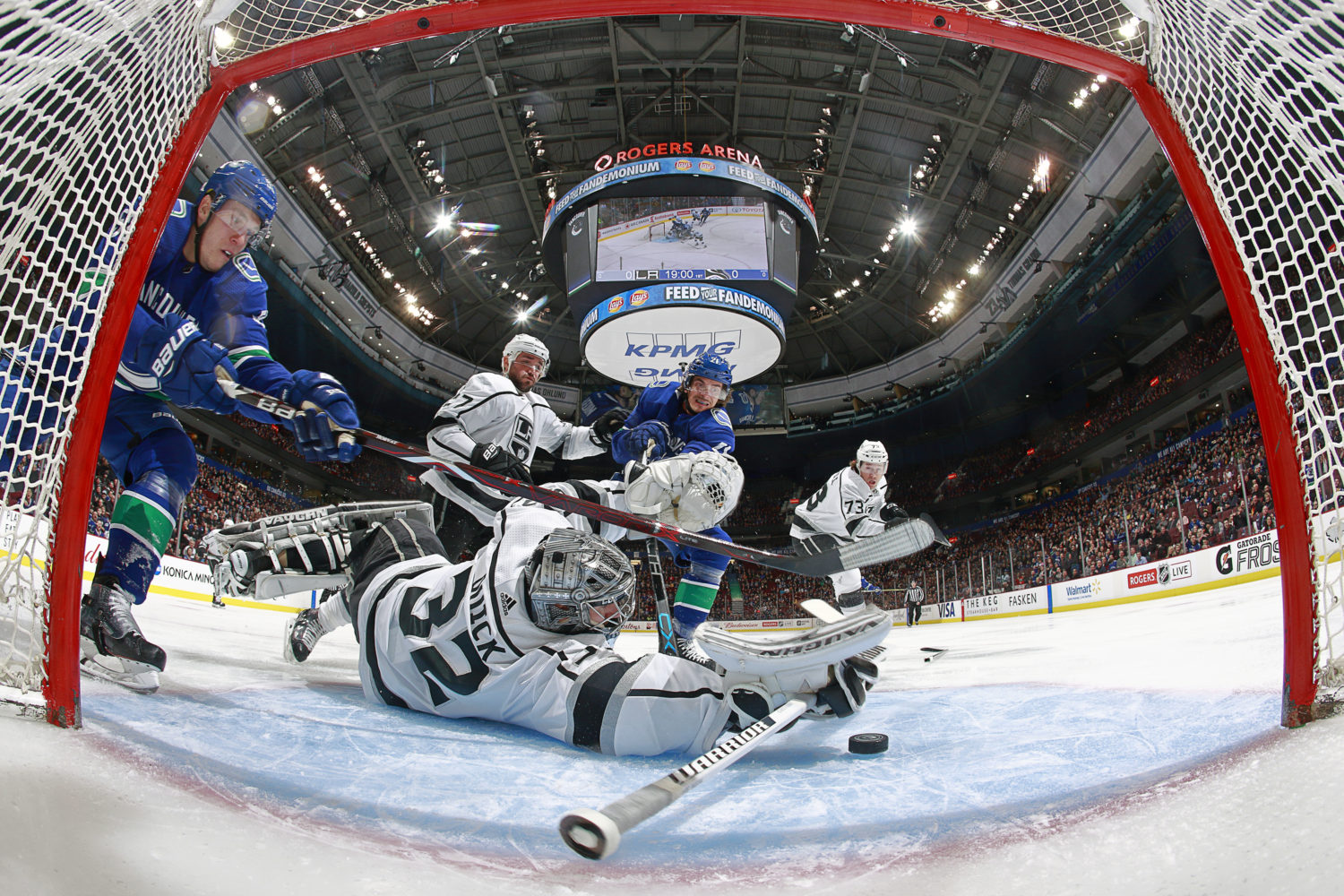 Jonathan Quick has been dealing with a nagging injury that will keep him from participating in All-Star Weekend January 27-28 in Tampa, Florida. Speaking with reporters prior to tonight’s game against Calgary, Los Angeles general manager Rob Blake spoke on the decision to keep Quick at home and confirmed that the injury did not take place when Quick was struck by a puck in the back of the leg during the game against Nashville on January 6.

“They’ve been on-and-off,” Blake said of the nagging injuries. “Just by going off of his past and his last season and that, we felt the time that he could use over this All-Star Break to really get things healed up and take that time to move forward for the stretch here.”

Because of league rules implemented to keep players from not participating in the All-Star Game, Quick, who is backing up Darcy Kuemper tonight at Scotiabank Saddledome, will not be able to dress for the first game out of the break on Tuesday, January 30 at Dallas.

NHL Deputy Commissioner Bill Daly, via email, says Quick “will have to sit out a minimum of one game _ either tonight or upon return.'' League policy for late ASG player withdrawal

“We understand the rules from the NHL,” Blake said. “I’ve been in touch with them going forward. Nothing’s been released yet, but we understand that part of that process, you have to have a game off.

The mandatory one-game suspension is not negotiable, according to Blake.

“No, and it’s fine,” Blake said. “We understood that going into this whole scenario. Like I said, he needs some time here to heal up, so it’s all part of the process.”

Had Quick not dressed for tonight’s game in Calgary, he would not have had to miss the game in Dallas. But Blake said that the team is plenty comfortable with Kuemper, and that they were not able to make a roster move to bring in a goalie for Wednesday’s game.

“We had some roster restrictions and we couldn’t get a guy in…And that’s why everything’s been so quiet,” he said. The Kings will wait wait for this weekend’s Ontario Reign games to elapse before determining whether they’ll recall Jack Campbell or Cal Petersen.

This all begs an important question: if Quick was hurt, and if skipping the All-Star Game was under consideration, was there ever any thought to provide him extra rest during a January in which he’s 2-6-0 with a 3.15 goals-against average and an .894 save percentage? Last Thursday and Friday, Quick played both ends of a back-to-back against Pittsburgh and at Anaheim.

Blake has said Quick, despite the injury, has been healthy enough to play. A longer-term outlook applies.

“That wasn’t an issue coming in here, but we also understand you get in the All-Star Game, it’s a three-on-three format, and there’s a lot of different situations for a goaltender, way different from a player, and if we could take this time, due to his past injuries and seeing what kind of season he had last year with that, we want to make sure he’s 100% healthy. If we can get five-to-seven days here by the looks of it, we’re going to use it.”

Additional injury news: Derek Forbort’s upper-body injury is not severe, according to Blake.

“It’s nothing long-term, by any means,” Blake said. “He’s day-to-day and will be reevaluated when we get home tomorrow. The next few days will do him good to have off, too.”

Nick Shore also missed Wednesday’s game with a lower-body injury; more will be learned on his status after the game against Calgary.

Some of the longer-term questions Blake was asked about on Wednesday centered around the team’s 1-7-0 skid, a sour stretch that festered with Tuesday’s 6-2 loss in Vancouver.

“They haven’t been good at all,” Blake said. “John speaks to that on a daily basis. The players understand it. We have to be better, yes.”

It was with an even-keel diction that Blake spoke about the challenges of the team’s poor starts during the skid and acknowledged that there are concerns about the group at this current juncture.

“I think any time you lose and continue to lose in different fashions, you do have concerns for that, for sure,” he said.

While those concerns do exist, one game – even one debacle, as was the case in Vancouver – doesn’t affect any sort of medium or long-term approach. Times are never as high or as low as they appear to be from the outside, but the organization is constantly taking stock and evaluating, and it appears the outlook remains just as it did at the beginning of the month.

“It’s the same,” Blake said. “You evaluate, and you do what you can. I think you guys have seen what we’ve had in the minors. We brought everyone that we possibly thought could give us something up here with Paul LaDue and [Kevin] Gravel being the latest, too. We have some other kids in the minors that are good, but they’re a little ways away from the NHL. I think what we’re doing is evaluating what we had as an organization, and we’ve seen those kids, and this is the team we have right now.”