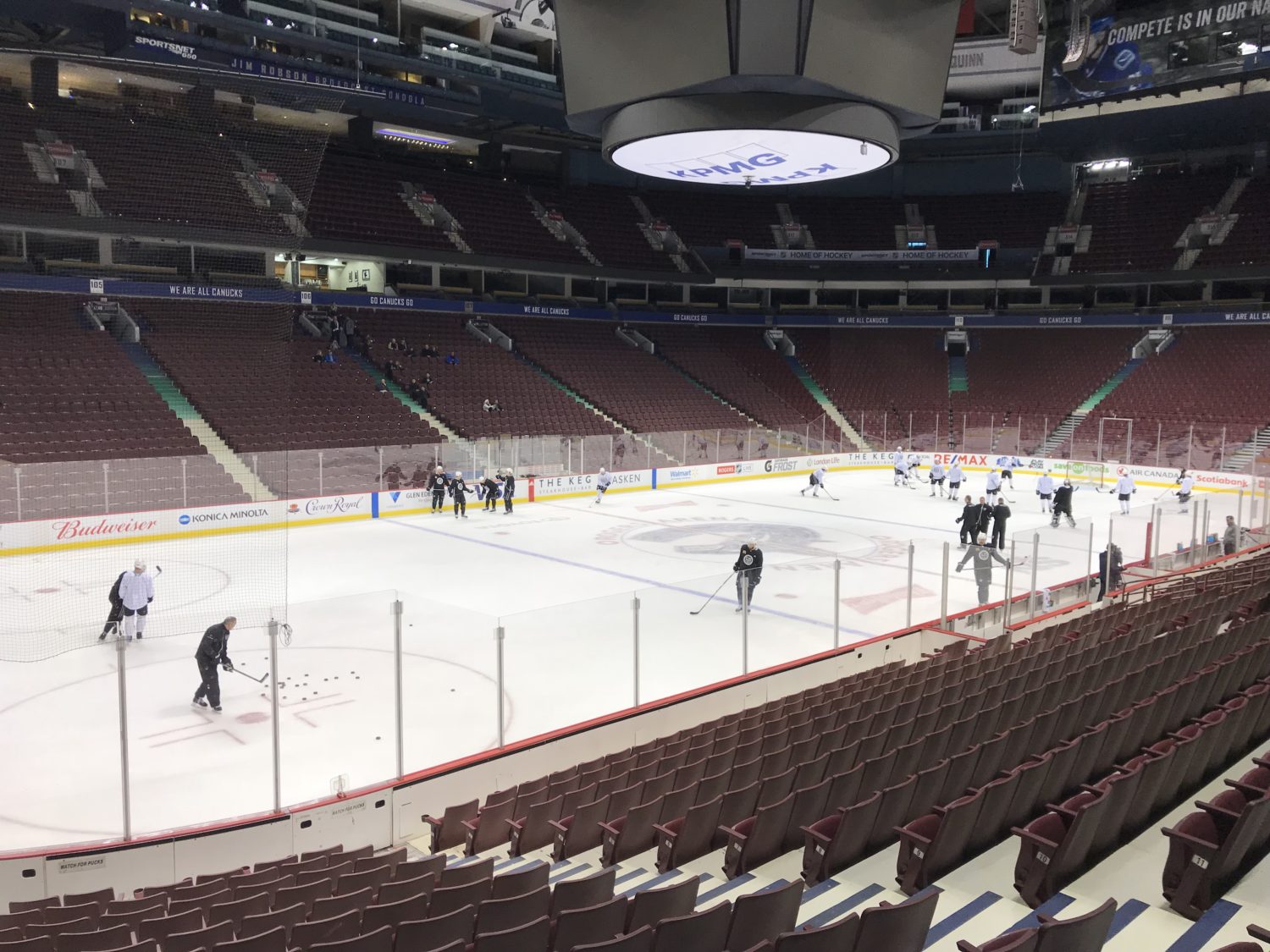 Good day to you from Vancouver, Insiders. The Kings skated at Rogers Arena at 11:30 a.m. and aligned thusly:

-The vitals: Jonathan Quick left the ice first at the morning skate and is projected to start in net. In his career against Vancouver, he’s 17-15-2 with a 1.70 goals-against average, a.936 save percentage and four shutouts. The .936 save percentage is his best against any Western Conference team. Andy Andreoff, Jonny Brodzinski and Paul LaDue were extras who remained on the ice for some extra work, so they’re not likely in tonight. Several milestone notes to pass along: Drew Doughty (99 goals) is both one goal from 100 in his career and from surpassing Steve Duchesne for second place on the Kings’ all-time list of goals by a defenseman. By playing his 736th career game tonight, he’ll tie Butch Goring for eighth place on the team’s all-time list. Anze Kopitar (273 goals) is two goals behind Goring (275) for fifth place on the team’s all-time goals list. Alec Martinez (52 goals) is tied with Larry Murphy for sixth place and one goal behind Mark Hardy (53) on the list of goals by a club defenseman. Jake Muzzin (43) goals is one goal behind Garry Galley (44) for ninth place on that same list.

-Their vitals: Minus Derek Dorsett, who has chosen to end his playing career due to health concerns following last season’s neck surgery, the Canucks are much healthier than the last meeting, when they were without Christopher Tanev, Brandon Sutter, Sven Baertschi and Bo Horvat. Defenseman Erik Gudbranson, a potential trade piece, will miss tonight’s game due to back spasms. Jacob Markstrom, who is 0-3-2 with a 3.34 goals-against average and a .902 save percentage against Los Angeles in his career, will start in goal. Vancouver is coming off a 1-0 loss at Winnipeg on Sunday, Horvat’s first game since December 5. Since that game, their wins have come against San Jose (in overtime), Chicago, at Columbus and at Minnesota (in overtime), though they’ve been really banged up through much of that span. After having played seven straight on the road, tonight’s game – their first at Rogers Arena since January 2 – opens up a five-game home stand that bridges the All-Star break.

-Interesting balance shared by Elliotte Friedman on the Department of Player Safety’s recent verdicts is available in his most recent 31 Thoughts column.

-Drew Doughty understands that the team played a strong game against the New York Rangers on Saturday, but there’s still work to be done. “We played well, but it’s only one win. We lost six before that, so we’re still not where we need to be,” he said.

That losing streak isn’t far enough in the rearview mirror to wipe some of the bad taste out of the team’s mouth, and the Kings surely need to improve their 5-8-3 divisional record, but the 47-game sample size has provided enough data to take stock of where this team seems to be at in advance of the ramped-up intensity of late-season hockey. Their goals-for has improved four-tenths of a goal per game from last season to 2.83, a modest raise from 24th in the league to 19th. Their goals-against has also improved from 2.45 to 2.43, a leap from sixth to first in the higher scoring 2017-18 season. (Familiarly, it’s Los Angeles and Boston, two traditionally stingy teams, that rank first and second in the NHL in goals-against per game.)

Other data that some might find interesting: the Kings’ +21 goal differential ranks sixth, their 50.2% raw Corsi-for percentage ranks 15th, and their 1.010 PDO has settled into 10th after floating among the higher PDOs in the league prior to the losing streak.

From the outside, we’re still hearing players refer to the Kings as being familiarly “heavy.” But where do the players see it? Has the identity of the team evolved at all through the first 47 games?

“Our identity is kind of the same it’s always been,” Doughty said. “It changed a little bit, but we just want to be hard-checking, hard to play against every night, good defensively. They’re not going to get much, and we’re going to try and win every battle. I think we’ve gotten a lot faster and we have a lot more offensive talent than we ever have had. We want that to also be a part of our identity, but I think for the most part it’s still going to be that hard-nosed competing group that’s good defensively.”

-Michael Amadio now has 11 NHL games alongside his name, a span in which he’s posted three points. His first NHL multi-point game came in the win over the Rangers two nights ago, courtesy of a power play goal and an assist.

“The first game again I was a little bit nervous, but I think I’m a little more comfortable again, playing three games now,” he said. “I feel a little bit more like myself.”

Amadio credited Alec Martinez with a great pass to set him up for the goal. Earlier in that shift, he made a strong one-on-one stick check on a Mats Zuccarello rush to send the play in the other direction. He hasn’t yet identified any one particularly skilled opposing player that has given him pause, but still understands that the focus and compete that he has to adhere to on every shift has been an eye-opening experience.

“I don’t think there’s one specific guy, but even the guys on this team, watching them every night and the plays they make, it’s incredible to see,” he said.

Amadio, 21, has the reputation of being a responsible player, and the 50-goal season he posted as a 19-year-old with OHL-North Bay in 2015-16 solidified him as someone capable of putting the puck in the net. He’s backed his junior play up with a solid 27 goals and 75 points in his first 98 AHL games – production that isn’t regularly seen from players in their 20 and 21-year-old seasons. When he was recalled earlier this month, he had points in 17 consecutive games.

“They couldn’t talk enough about how well he’d played down there,” John Stevens said. “They’d paired him up with Matt Moulson down there, and Moulson’s a veteran guy that spends a lot of time around the net, and I think their chemistry was really good together, and Michael did a really good job of getting a little taste up here. He went back down there and just continued to work and get better. I think having been here once before has really helped him. He understands the pace of the game and how hard it is and the compete level necessary, and I think for a young guy he’s got a lot of composure. He doesn’t get rattled easily. He can hold on to a puck in tight spaces and still make a play, and I think the one area we’ve been pleasantly surprised with, he positions himself really well without the puck. He stands on the right side of people in his own zone, he’s not reaching on the wrong side of people, and that earns the coaches trust and allows him to get on the ice more.”