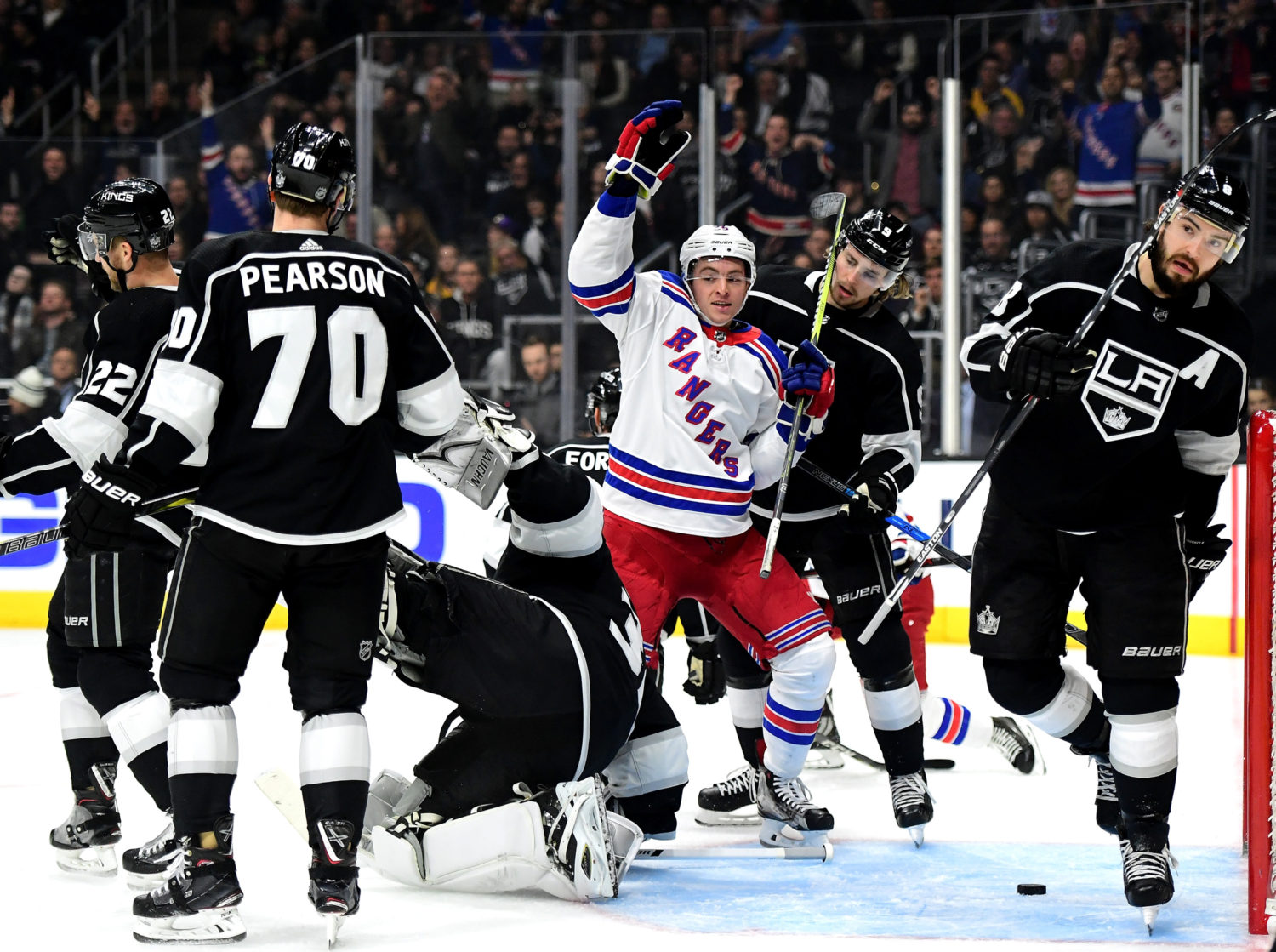 Alain Vigneault, on his conversation with the refs at the end of the first period:
It was just about their goaltender crossing the red line and coming to provoke a couple of our players. You know, we played a real solid period in the first. Played the way we had talked about before the game. Not crazy about Smitty’s penalty, but our PK, who has been a real good weapon for us, let us down. They scored three goals and I want to say that was the difference in the game.

Vigneault, on whether Smith should have shown more discretion in regards to taking a penalty at the end of the first:
You know, not quite sure. I haven’t looked at the replay. I don’t quite know what started the scrum. I did see, quickly, the shot from behind. Referees are going to call that obviously. The guy falls down. I’m definitely not crazy about that penalty at that time, the way we played in the first.

Vigneault, on whether Clifford’s hit on Brendan Smith deserved more than 2 minutes:
I’m going to let the league deal with that. They do a good job of handling those so img going to let them handle that.

Vigneault, on whether Henrik Lundqvist’s game seemed off:
No. He played very well in the first period. Unfortunately, a couple of them got through in the second.

Marc Staal, on Clifford’s hit on Smith during the scrum at the end of the first:
I mean, I saw the replay quickly. But it looks like he jumps, jumped right into his head. He got a penalty obviously, but I thought it easily could’ve been five.

Staal, on if he sensed the team losing momentum at the start of the second:
We just had to kill some penalties. They got some momentum and then we took some penalties and no way we’d have been able to kill those off and get something going the other way. They just found a few on us tonight. It hurt us and we weren’t able to get it back.

Staal, on why the penalty kill struggled tonight:
I mean, penalty kill’s a lot of time, just little details. I mean, that one that cleared off Nasher’s skate? That’s a tough break. And then the other one’s are just little details of positioning and things like that where we were just a little bit off and they took advantage of it.

J.T. Miller, on whether the loss is particularly frustrating given the way the game started:
Yeah for sure, it’s frustrating. We came out with the right mindset and preparation and played one of our best first periods I think, in a while. Obviously they’ve got a good power play. They made us pay in the second there. But the same thing in the third. We were physical, we were on them, had our looks. Just on the wrong end of the stick right now.

Miller, on why the penalty kill struggled:
I don’t really want to speak on behalf of the PK. I’m not out there a whole lot with them. I don’t know, they’ve been really good this year. So it’s one game. I’m not really worried about it.

Miller, on the momentum swing at the end of the first:
Yeah, there’s a lot of swings in a game. This is a tough building to come in and play against a good team. And like I said, our start was really good. That’s something we can build on looking forward, knowing that we can play the right way. They had their push. Like you said, there was a swing and we got some momentum back in the third, so it’s a frustrating one. That’s like a hard-fought game. It’s a playoff-style game and we’ve got the next day off tomorrow to let it sink in and get ready for another big opponent.

Henrik Lundqvist, on the Kings liking to put players in the crease on the power play:
Well, not only on the power play. I think they’re one of the better teams to use their point and get people in front all night, especially first two periods. You know, they’re around you all night and every shot feels like you have to fight so hard just to see it and then a lot of times they get a stick on it as well. So they’re good. They’re really good at that. And they keep their game simple, but it works when they’re on top of it. Obviously you don’t have to be very bright to figure out why we lost this one. You know, we just couldn’t get it done on our penalty kill and I’m a big part of that obviously. I have to work even harder to try to find the puck, but they play well on their power play. They move it around and get people in front and they make it really hard.

Lundqvist, on the momentum shift in the second period:
Well it’s definitely not the way you want to start the period. It was just unfortunate. We take a penalty at the end of the first and they make us pay. And then there was a few penalties there in the second where they just made us pay again. And again. So five-on-five I thought we played a really strong game. We just came up short on the PK. So that’s something we’ll have to correct for the next one. Like I said, you know, it’s me working with the PK to try and really see the puck and stop the puck.

Lundqvist, on whether he was surprised that Clifford’s hit on Smith only got two minutes:
I haven’t even seen the replay so I cant really comment on it. I don’t know, it looked like a really hard hit, but I have to see it first before I say anything.