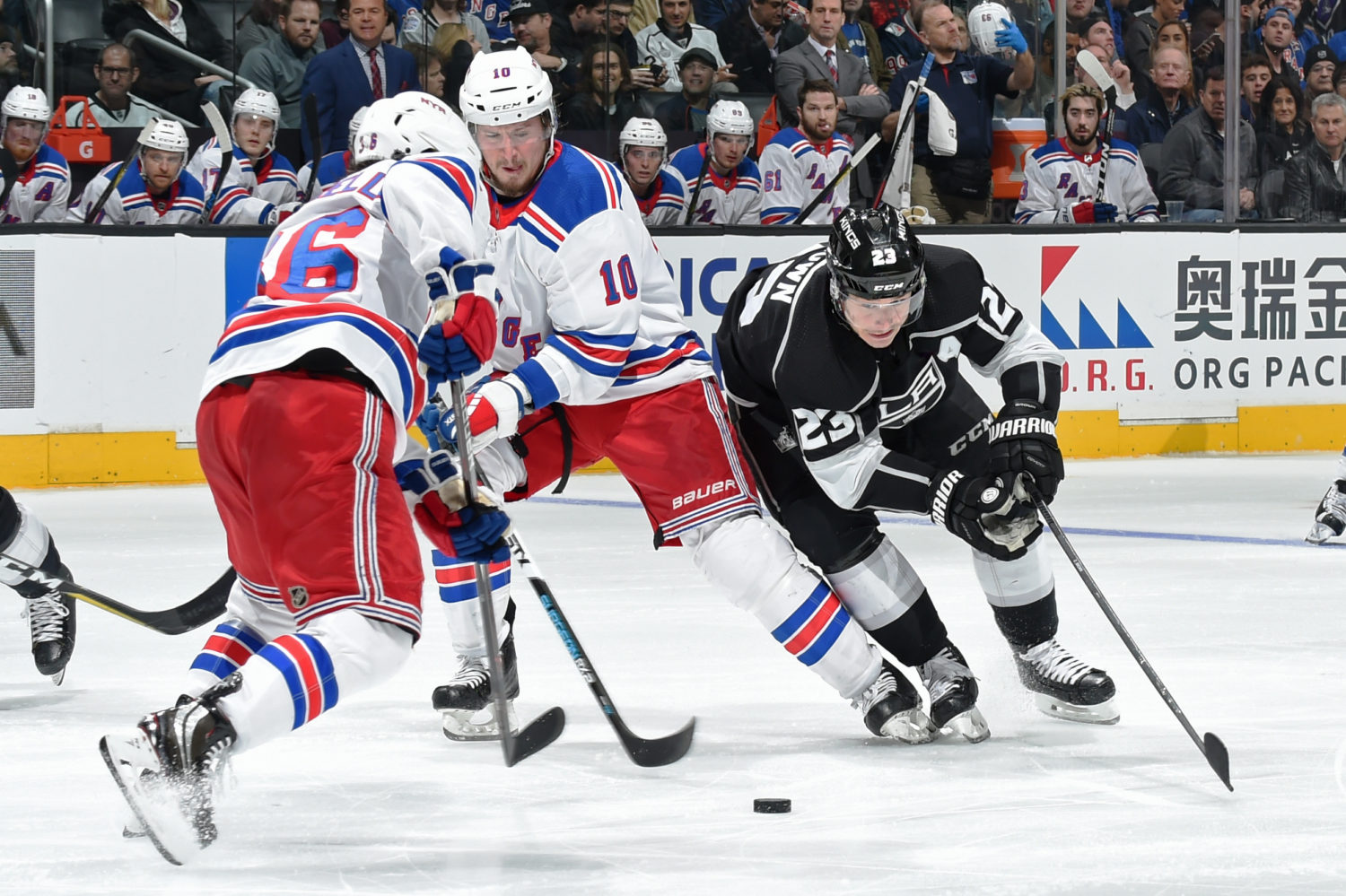 On how it felt to snap the losing streak:
Well, it feels good to win. To be honest with you, it’s been a while. It didn’t start out very good for us, but I think it was really important for this team to get a win at home before we go on the road. We’ve got a stretch of road games coming here. Yeah, I think it was really impressive the way they dug in and fought back. The ice was tilted to start the game. If anything could go wrong, it did go wrong, but credit to those guys – they got it turned around in a hurry.

On whether Adrian Kempe’s fight helped turn the game around:
Well, I actually thought it happened before that. I thought the second period really got involved. It just seemed like we were working, but we weren’t working in the right way in the first period. We were chasing pucks, we weren’t getting on the right side of people, the puck battles. We weren’t stopping them, and I thought we did a much better job as they went along, and credit to Adrian. The kid he’s fighting over there is a pretty tough kid and has been in the league for a while and Adrian’s standing up for himself. If anybody’s ever questioned the heart that kid’s had, I’m not sure why, because he showed a lot of it.

On whether he was happy with the emotional and competitive involvement:
Well, I think it’s important. When they’re emotionally standing up for each other, I think it’s just a sign that they care about each other, and I think that’s always important with a hockey team, always. I think emotion is really good, but it’s got to find the line of discipline. You need heat to cook something, and if you give it too much heat, you burn it. I loved the emotion on our team and I thought we did a pretty good job once we got going of pushing it to the line of discipline and not getting undisciplined.

On whether it was good to see Tanner Pearson score the game-winner:
For sure. I thought he made a big step in his game tonight. He was really good on the wall. He’s been working on his net-front stuff for a while, and I thought he did a really good job. Amadio made a couple great plays, but a lot of composure, and I think our power play’s really trying to focus on simplifying where we’ve got opportunities to shoot the puck. Reward the guys that are at the net like Brownie and Tanner, and it was good to see him get rewarded tonight.

On whether there was a “sense of relief” that the losing streak was over:
It’s a couple times I’ve heard the word ‘relief,’ but to be honest with you, there’s not much time to rest here. It’s about getting rested and reloaded and getting on the road for a couple tough road games. It’s important to get points every night. We’re just focusing on one game at a time, and again, I think it was just important to get two points here before we headed out on the road.

On how to parlay an emotional win into something longer:
Well, streaks are funny. Sometimes you’re winning and you should be losing, and your team’s not playing very well, and we’ve had games like that this year, and then there’s times when your game’s coming around and you lose the game but you’re playing a lot better, and I think our team had played better against Pittsburgh and Anaheim. We didn’t get the reward we needed. I thought we had a great start against Pittsburgh here at home and really did all the right things, and again, anything that could go wrong did go wrong. But that’s hockey. If you want breaks in the game of hockey, you’ve got to put the work in. The harder you work, the more breaks you get. Hockey luck’s a funny thing. You want it to go around, but the bottom line is the harder you work the more breaks you get, and I thought tonight was an example of that.

On whether the players felt there was a “burden lifted” with the win:
I’m not sure – you’d have to ask them that question. The one thing I’ll tell you, and I think Curtis asked me the question the other day. ‘Do you think you can turn this around?’ ‘Well, why do you think that?’ The one thing I’ll tell you is we have a really good group here. I think we have some good players, but I think we have a really good group of people, so there’s no question in my mind that this group really is willing to dig in and do what’s necessary to start getting some points on the board.

On Tyler Toffoli opening the game on the third line, and whether it was due to something lacking:
No, we were just trying to even things out a little bit. Ty’s really good on the wall. We just thought maybe with Shoresy, Shoresy had played with Tanner and Ty before. We thought that might work. We weren’t exactly sure with Amadio yet – a pretty ramped up game and how he would do it. I think he made a really good account of himself, so it was nothing else more than trying to balance things out a little bit so we could get some flow in our game and shorten our shifts, play with more pace and even things out across four lines.