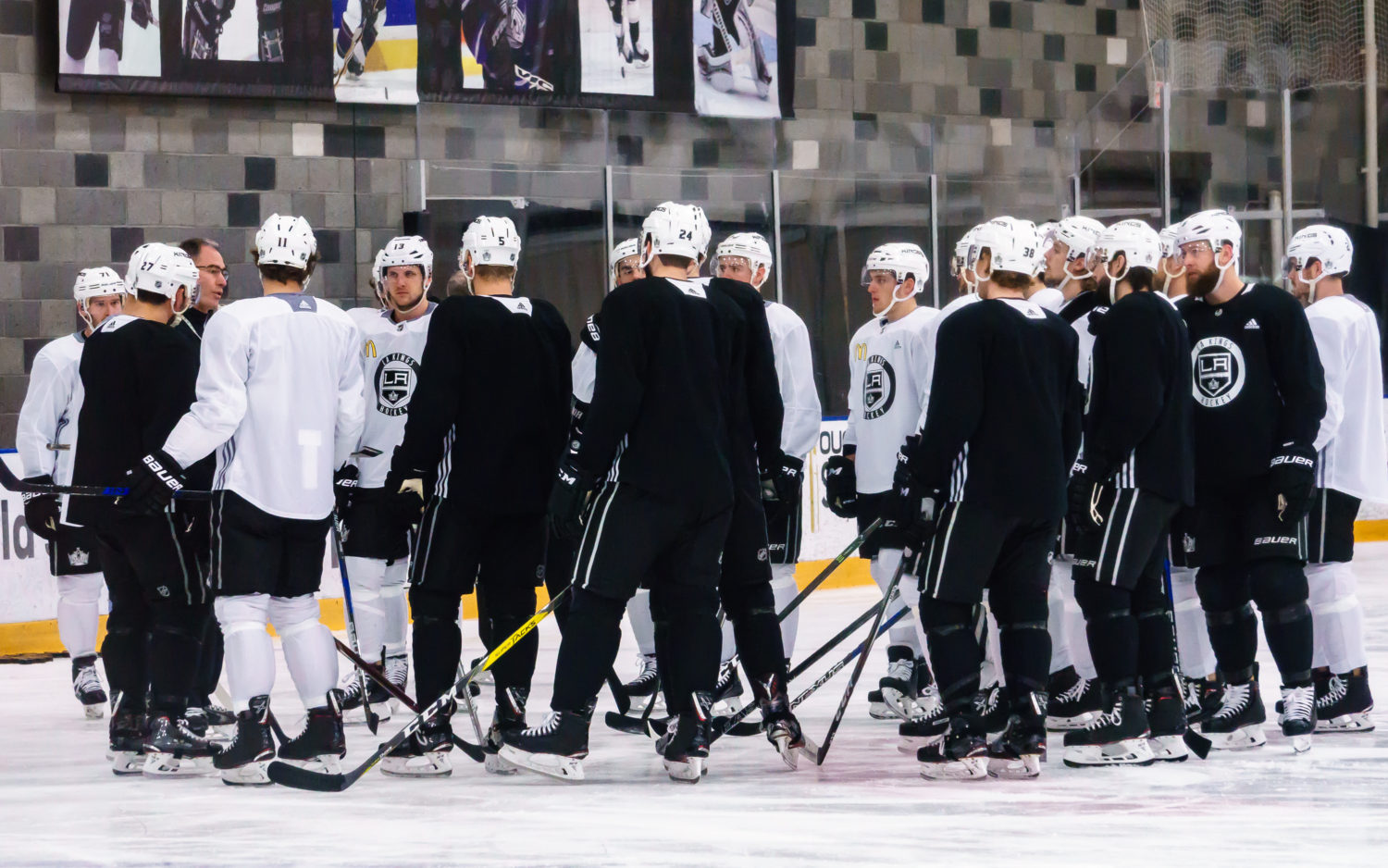 -The vitals: Jonathan Quick, who turned 32 today, left the ice first and will be expected to start against the Rangers. In his career, he’s 4-4-0 with a 2.50 goals-against average and a .904 save percentage in eight regular season games against New York. Jonny Brodzinski, who rotated through the Amadio line, Andy Andreoff, who skated as an extra defenseman to balance out the pairs, and Paul LaDue remained on the ice for extra work with Darcy Kuemper, so they’re likely out of the lineup tonight.

-Their vitals: Staples Center wasn’t available for the Rangers this morning because of the Lakers-Knicks matinee – more on that below – so New York skated a pair of banged up players at Toyota Sports Center on Sunday afternoon. Defenseman Marc Staal (hip flexor), who has missed two straight, and forward Kevin Hayes (leg contusion), who has missed four straight, got a lengthy workout this morning in El Segundo. Also on the ice was goalie Ondrej Pavelec, whose last game at Staples Center was the final game of the 2015-16 season, when he and the Winnipeg Jets erased a 3-0 deficit and won 4-3 in a shootout to help deny Los Angeles the 2015-16 Pacific Division title. He’s 4-3-0 with a 2.29 goals-against average and a .934 save percentage against the Kings in his career, while Henrik Lundqvist is 5-4-2 with a 2.52 GAA and a .920 Sv% versus Los Angeles. There’s no word yet on whether it will be Pavelec or Lundqvist. The Rangers will be without Chris Kreider (blood clot) and Kevin Shattenkirk, who will undergo knee surgery tomorrow to repair a torn meniscus. Michael Grabner (flu) did not play yesterday in Colorado, a 3-1 loss to the Avalanche in which Lundqvist stopped 34-of-36 shots. Among the Blueshirts’ call-ups is defenseman Anthony DeAngelo, who potted the game-winner in an 11-round shootout that the Coyotes claimed at Staples Center last March, and forward Daniel Catenacci, who played with Jake Muzzin at OHL-Sault Ste. Marie.

Vigneault on possibly having Hayes, Staal or Grabner for tomorrow in LA: "I would say both Kevin and Marc are at best 50-50 for tomorrow. And Grabs I have no idea right now." #NYR

-This is just an awful story. Condolences to the family of USA Hockey assistant executive director of hockey operations Jim Johansson, and all his friends spread across North America and the globe. Johansson, 53, was USA Hockey’s Men’s Olympic Team General Manager and passed away in his sleep this morning.

Via NHL Commissioner Gary Bettman: “In building the teams that achieved so much success for USA Hockey, Jim Johannson had a sharp eye for talent, a strong sense of chemistry and a relentless pursuit of excellence. The NHL family’s respect for Jim’s contributions to hockey, at all levels, is exceeded only by our shock and sorrow over his sudden passing. We send strength, comfort and condolences to Jim’s wife, Abby, his daughter, Ellie, and his many friends in our sport. As we mourn his loss, we will remember the positive outlook Jim brought to his tireless efforts to advance USA Hockey.”

So sad to hear the passing of Jim Johannson. Way too young. My thoughts and prayers are with his family! #RIP #USAHockey

-If you’ve read this far into a Los Angeles Kings site on a Sunday afternoon, you’re likely aware that the team has had struggle scoring recently. They’ve netted 11 goals in their last six games and haven’t held a lead since the second period of their 4-3 loss to Calgary on January 4, a span of nearly 266 minutes.

Within the broader frame are several individual slumps. Dustin Brown, whose rebound this season is largely why the Kings had surged towards a playoff spot in the first half, has been held scoreless in the last five games. Tanner Pearson, who like Brown contributes beyond what his goal output reads, has one assist over that span and has eight goals, six fewer than he had last season at this time. And though Stevens liked Marian Gaborik’s game versus Pittsburgh – “Gabby must’ve had four or five high, high quality chances that he normally doesn’t miss on,” he said – the winger is still looking for his first goal in 2018.

“Could’ve got three, four goals that game,” said Gaborik, who was able to generate his chances from both off the rush and in tight quarters against the Penguins.

It’s the close-in areas that aren’t easy to get to in the attacking end that can turn the current stretch into one much more fruitful. Alex Iafallo crashed the net to supply the team’s lone goal on Friday, but on Saturday, there was a recurring theme as to how the team could break out of its offensive doldrums. Stevens wanted to see the team “tougher in the hard areas inside the dots,” and was also hoping for more of an emotional commitment to toughness, a notion he underscored by calling to attention the fact that the Ducks registered 24 blocked shots to the Kings’ 12.

“I think the Anaheim game was a little bit tighter, but in terms of where we’re getting the shots from and for and against, one area that probably wasn’t up to par in Anaheim was the power play, and I think Anaheim’s just a little bit of a different game,” said Stevens, who noted that he’s been satisfied with the forecheck’s improvement over the last 20 games.

“They really put a lot of pucks in, forechecked, and tried to shut down the middle of the ice,” he continued. Blocked a lot of shots,” he continued. “It’s a concern where you don’t score enough goals, but I think our root of success comes from checking. We check better, we score more, we’re on the right side of the puck, we get it back quicker, we force teams to play through us and we get pucks back of our forechecks in better position.”

Rather than the forecheck, the ability to spur the offense starts with the puck back at their own end of the ice.

“If we’re quick out of our own zone, and quick in our own zone, and they’re in a place where they aren’t as organized as quickly, it’s probably easier for your chances that way than coming up with pucks on the forecheck and putting them to the net, so we’ve just got to keep doing more of that,” Pearson said.

Personally, Pearson appeared to be rounding a corner in a season in which his assist rate has climbed and his familiar forechecking ability has largely been present but the goals haven’t come as regularly. Related: Jeff Carter, who often distributes the puck to him, hasn’t played in over three months.

“I don’t think my game’s been up to par since before the break there,” he said. “I had a good stretch, I think, between the Christmas break and bye week. But since I’ve been back, I’ve got to get to the net more in the dirty areas.”

If the team can improve production from those dirty areas, where Pearson, Brown and Gaborik have made a living out of generating production from second and third opportunities, they’ll help themselves climb out of their current offensive rut.

“Obviously, goals have been tough to come by. You’ve got to find a way to get into those areas and get those ugly goals,” Gaborik said. “That’s just been always when we have trouble scoring goals, we just have got to get in the area and bear down. You know, chances have been there, but when they are there we need to bear down to make sure it goes in the back of the net. But we’ve got to make it more uncomfortable for the goalies. You know, try to crash the net and go to the net and find those loose pucks.”

“The goals are scored in those areas pretty much around the net, so it’s not like somebody’s going to take a puck and then dangle through the neutral zone. We just have to bear down and just get to those areas to find those pucks.”

-More from Pearson, on whether anything has evolved in the team’s forechecking efforts: “No, I think everything’s kind of stayed the same with the new regime coming in. I think especially we’ve been a good defensive team the past couple years, or forever. So, keep that in place and then nothing’s really changed forecheck-wise. I think that was a good thing coming in. There weren’t really any big changes. It was kind of the same protocol.”

-Pearson on power play efforts: “Maybe if we take a couple, even myself, take a couple more pucks to the net from off the wall and maybe get hauled down or put yourself into a scoring situation or make them take a penalty on you. So, it’s just a little bit like that.” 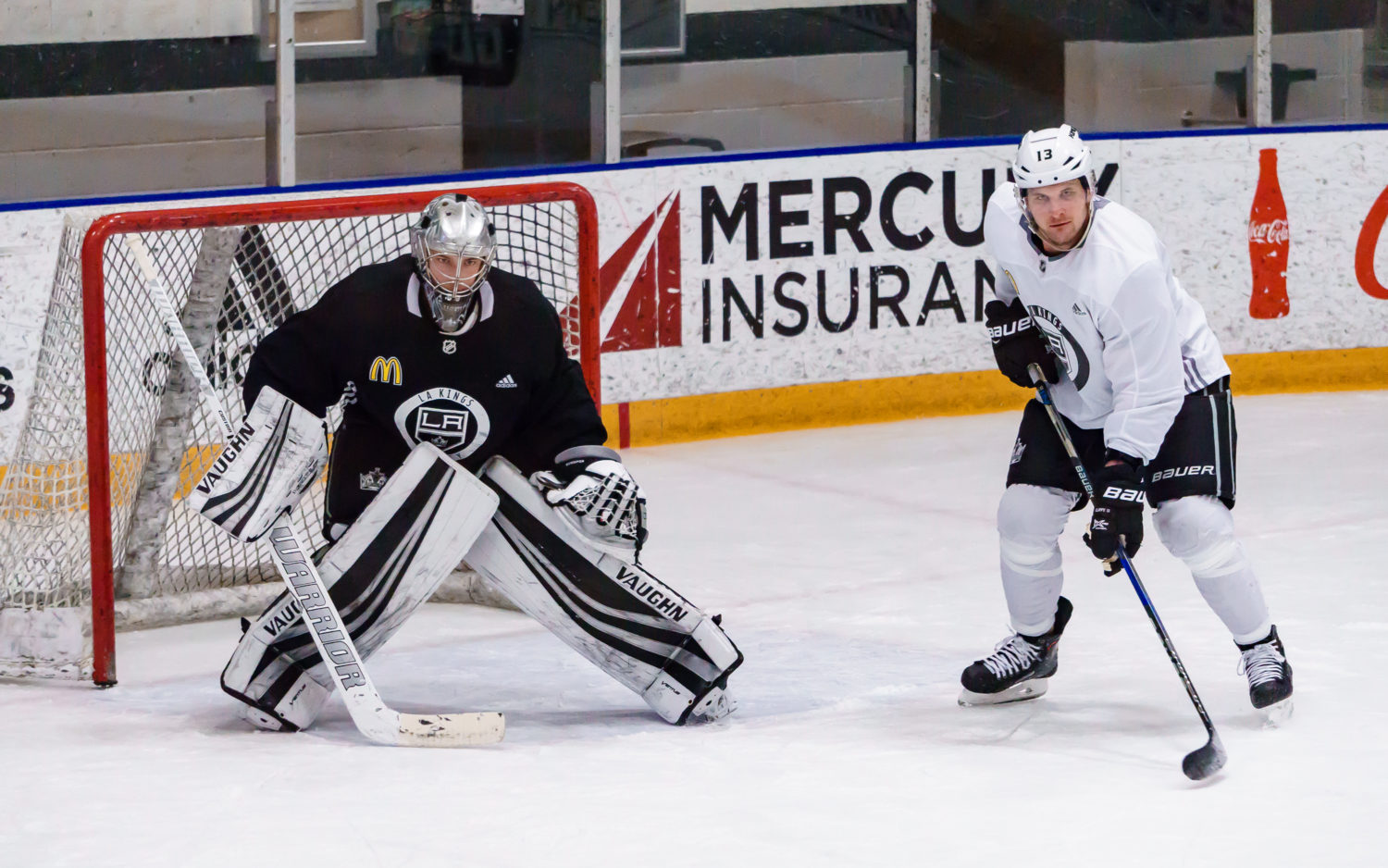 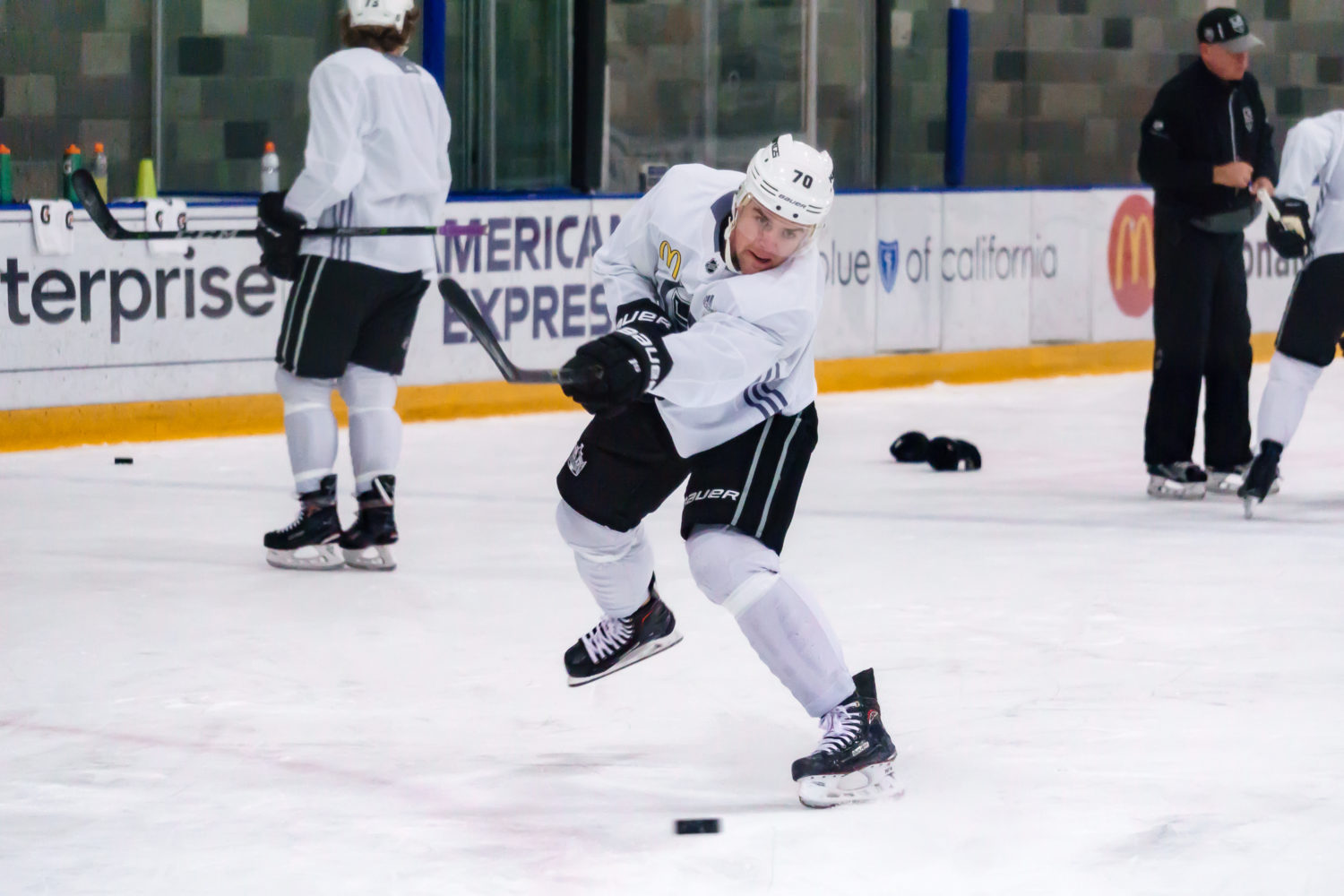 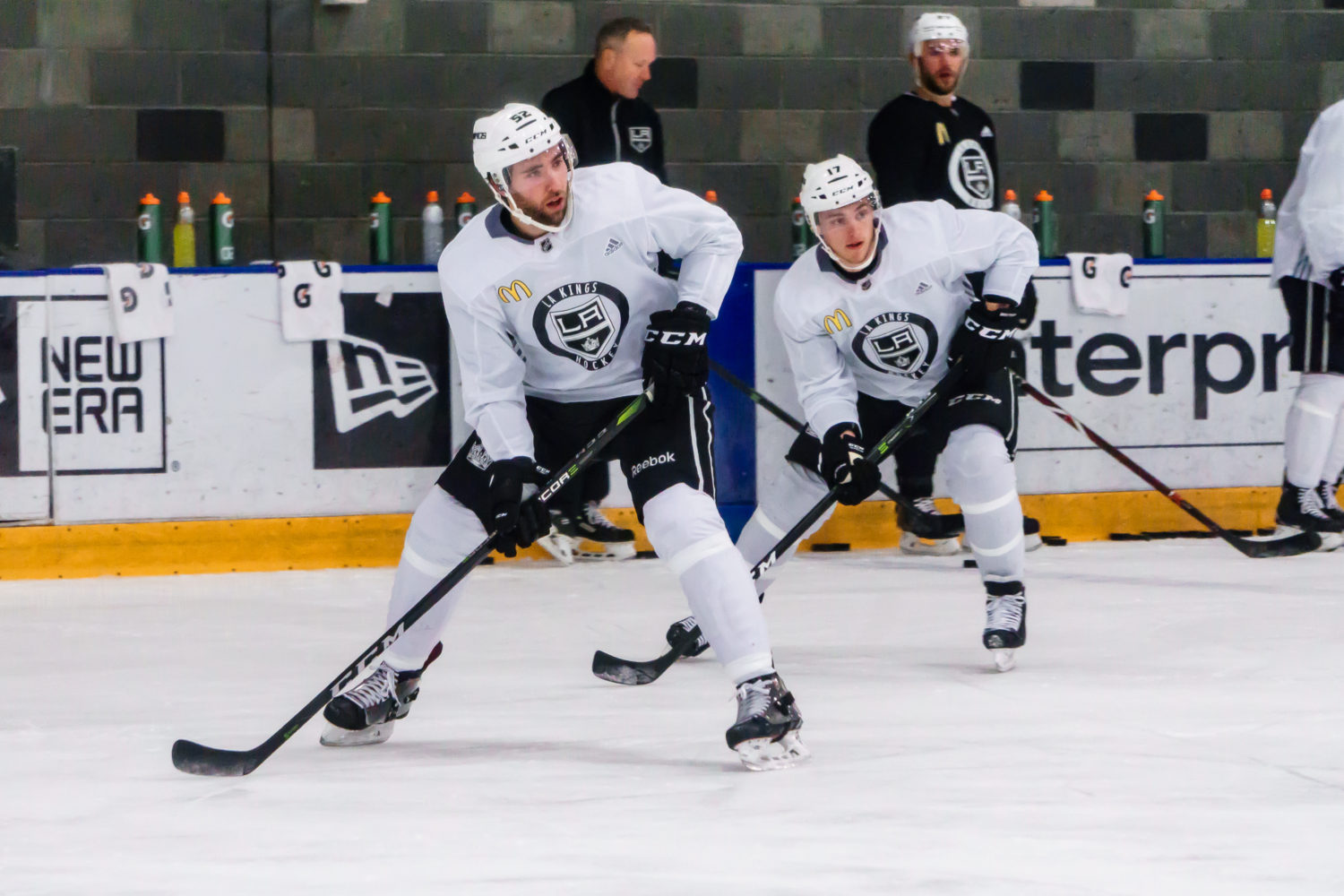 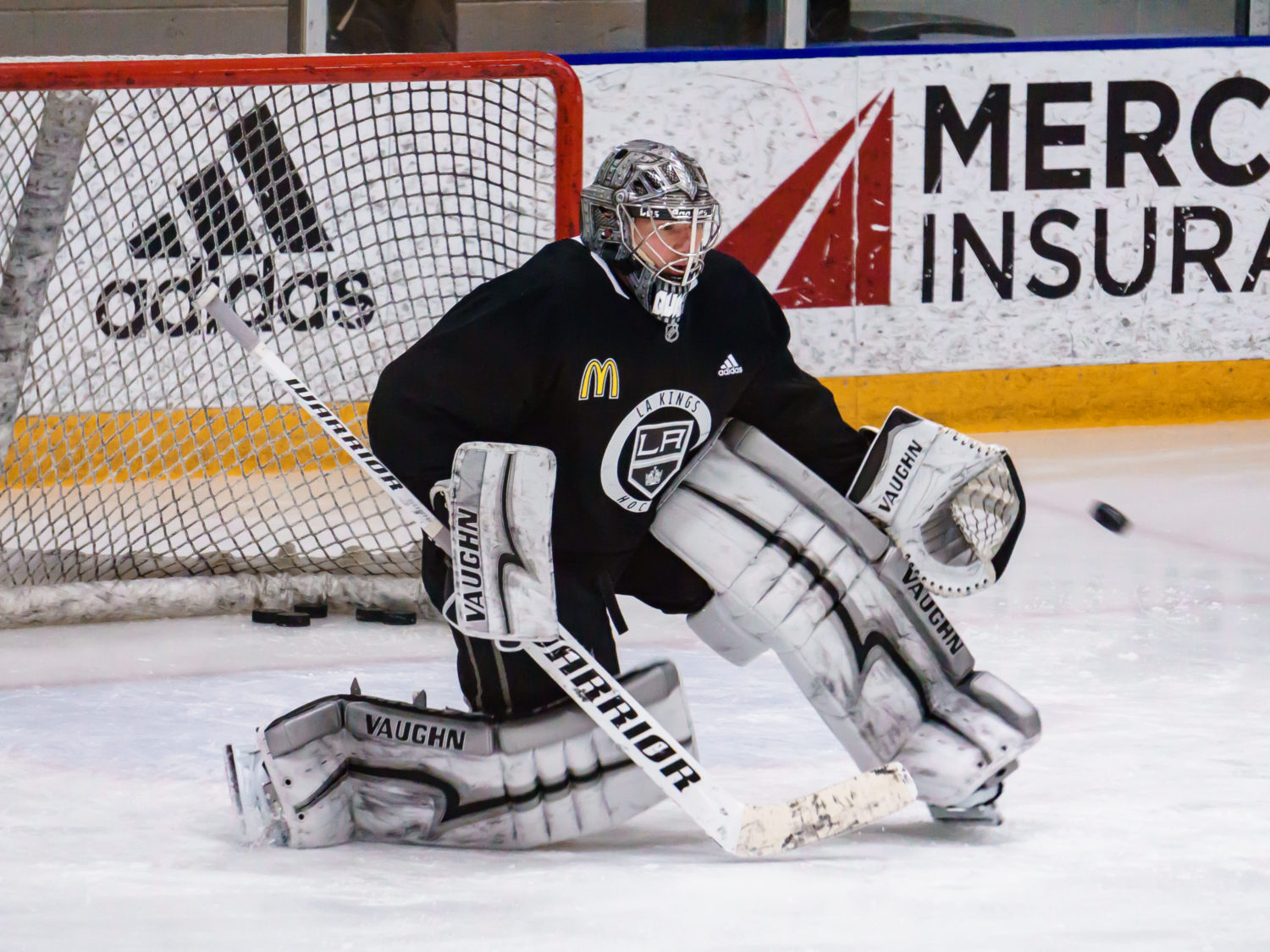 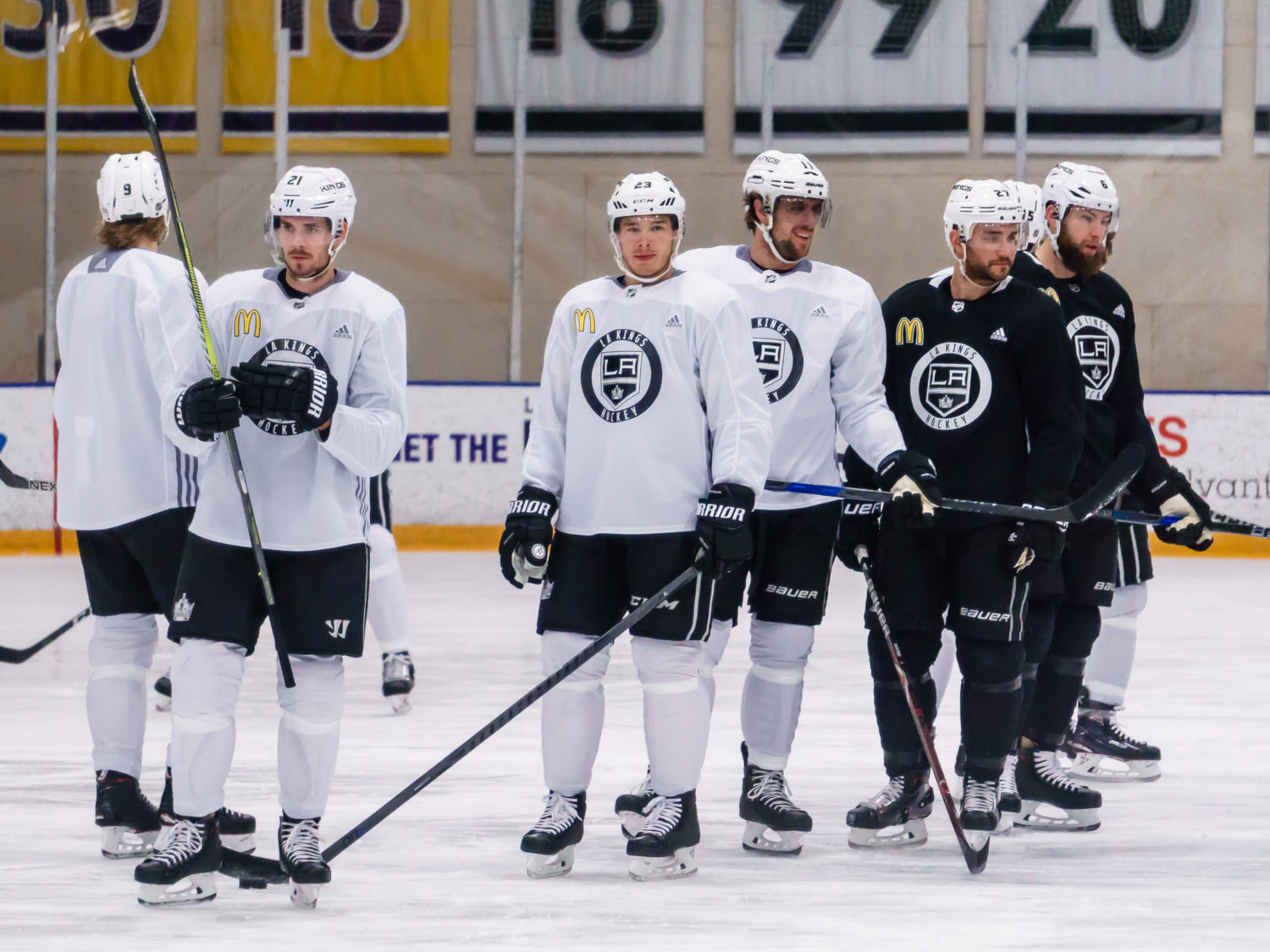