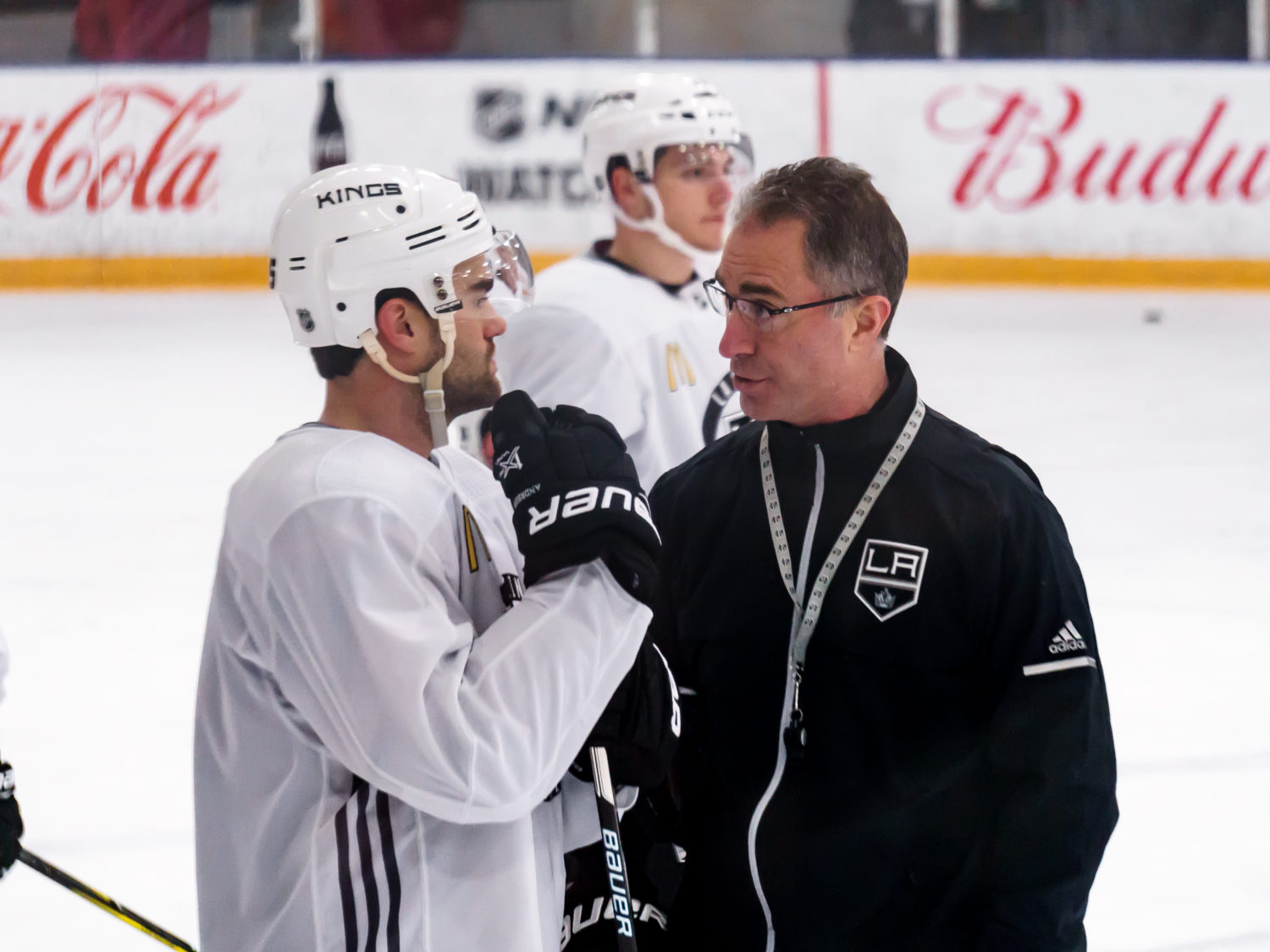 On how bright Alex Iafallo’s future is:
I think we’re all excited about what he’s been able to come in and do. Other than a week or so stretch there where he looked like maybe the schedule caught up with him a bit, he’s been a really consistent performer. I think as a young player, that’s what you want to look for. When you have a skill set that he does and really understand and appreciate how he plays without the puck I think you have an opportunity to have a really good player. Even though he’s not a big guy, he’s a really, really effective forechecker. He comes up with a lot of pucks. Even in hard-fought games he’s been a really effective player, so I think it’s really promising one area of his game this year where – I wouldn’t even say it was a concern – you just look at his game and you’d say he hasn’t scored a lot. We think he can score. We’ve seen him start to score more in practice now. We see things starting to happen from around the net. He seems like he’s around the net more. But we’re excited about him. He’s got a well-rounded game that can play in a lot of situations and very, very strong ability to play well on both sides of the puck.

On where the chances are coming from, and how the forecheck leads to chances, according to data:
I keep saying this over and over again, but every game’s been a little bit different. We’ve actually had some games where we’ve had a lot of quality chances. Even the Pittsburgh game, we had a lot of quality chances. I think the Anaheim game was a little bit tighter, but in terms of where we’re getting the shots from and for and against, one area that probably wasn’t up to par in Anaheim was the power play, and I think Anaheim’s just a little bit of a different game. They really put a lot of pucks in, forechecked, and tried to shut down the middle of the ice. Blocked a lot of shots. It’s a concern where you don’t score enough goals, but I think our root of success comes from checking. We check better, we score more, we’re on the right side of the puck, we get it back quicker, we force teams to play through us and we get pucks back of our forechecks in better position. We get more opportunities, so the forecheck’s probably the one area of our game that’s improved over the last 20 games the most. But at the end of the day, we’ve got to tighten up and find ways to win hockey games. If that’s 1-0 or 2-1, then we’ve got to be willing to do it.

On whether Marian Gaborik and those struggling to score are challenged in harder areas down low:
The games are all running together, but I think it was the Pittsburgh game, Gabby must’ve had four or five high, high quality chances that he normally doesn’t miss on. I’d be more concerned if he wasn’t getting chances, but to your point, we can be tougher in those areas. We can be more sense-of-urgency in those areas. We’re just leaving a little bit too much on the table when we get to those areas, and I think sometimes it’s just about positioning a little harder on those areas, a little harder on the boards getting off the wall, a little harder inside the dots when those scoring chances are there, and when you are in those extended zone times, you get a few more second chance opportunities around the net, and I think clearly that’s an area that we can be better at.

On any differences in the Rangers’ systems or tendencies:
I wouldn’t say ‘tendencies.’ Their style of play and everything is the same. They have had some new people inserted in their lineup with some injuries they’ve had, but I think the strength of their team has been their forecheck. They’re ranked really high in a lot of offensive zone categories. They create a lot from the forecheck, they create a lot from the middle of the ice, they get some big forwards that go to the net hard, their D are involved and they’re really aggressive down walls, and I think that can lend itself to opportunity going the other way if you’re sharp and you’re tough on walls. What we need to do is get the puck in their end and go to work deep in their end, but one thing that does come up when you look at it is they’re a very effective team when you allow them to get in the offensive zone.