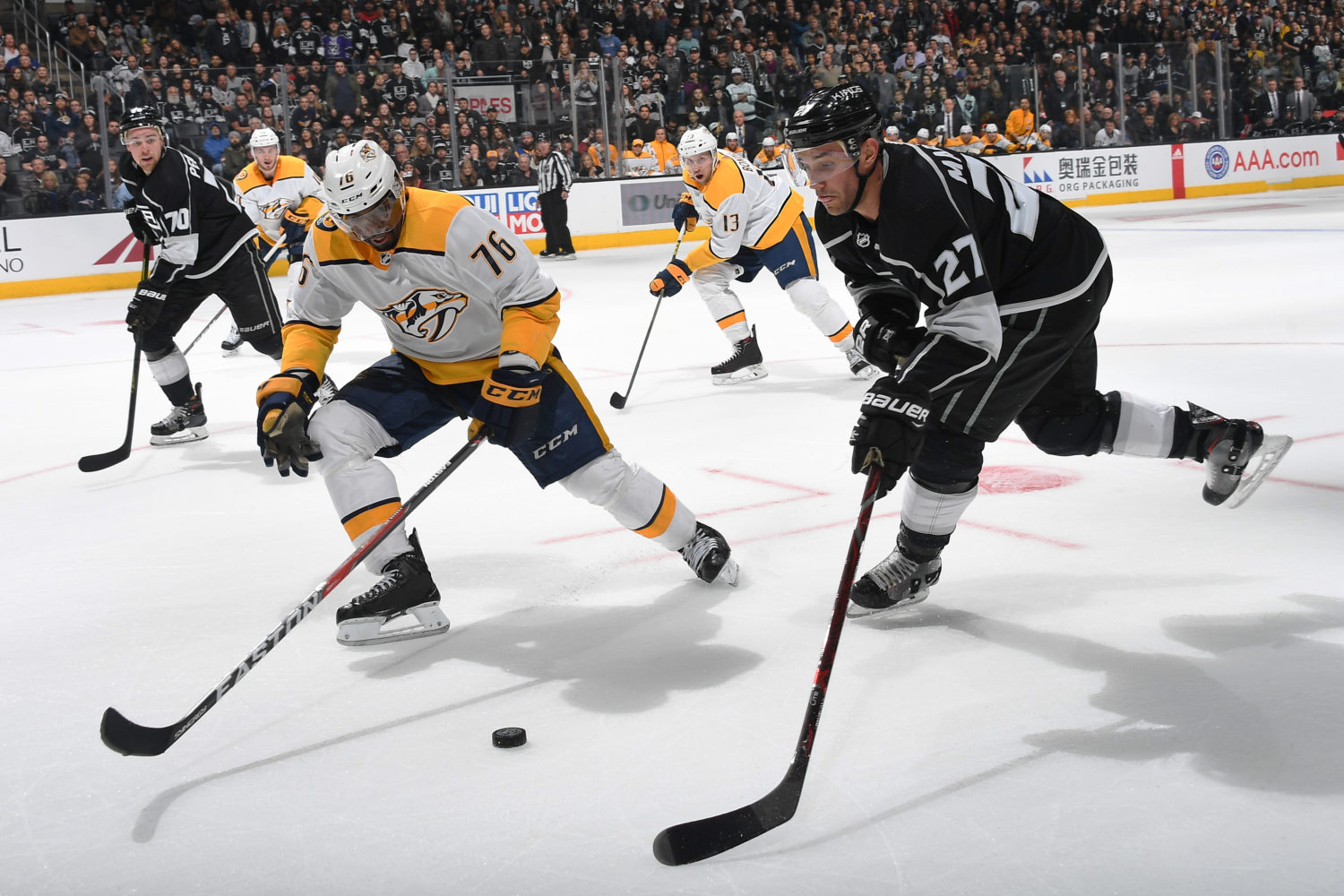 The Kings held an optional practice at Toyota Sports Center on Saturday morning some 13 hours after dropping their sixth consecutive game, a 2-1 setback to the Anaheim Ducks. John Stevens’ observations from the game are available here; there’s a recurring theme that the team needs to be “willing to engage in the hard areas,” “tougher in the hard areas inside the dots,” “going there with a purpose” and how “the game is won and lost in the trenches,” in case you were looking for any messages from today’s media availability. For a team that isn’t among the higher skilled teams in the NHL, that type of hard-area encouragement could lead to an additional greasy goal here or there, which could have made a difference in a game with as narrow of a margin as last night’s. There was also praise for Alex Iafallo, who is “probably our smallest forward and most effective guy in a really hard game.”

Right-shot defenseman Paul LaDue was recalled on Tuesday but wasn’t among the 18 skaters written onto John Stevens’ lineup card for the games against Pittsburgh and Anaheim.

“We want to get him acclimated with the team first and get him going,” Stevens said. “We have not been totally displeased with the way the defense has played, especially Kev coming in, but we would like to get him back in the lineup here at some point because I think he’s really improved.”

Eventually LaDue will get his work in. In an early January discussion with LA Kings Insider, General Manager Rob Blake identified LaDue as a player the team would get a long look at in the second half of the regular season, and there’s still plenty of time for that to happen with 36 games remaining.

But though there had been a drop off in personnel between the top four and the bottom pairing prior to Tuesday’s roster moves in which LaDue joined the team and Kurtis MacDermid and Oscar Fantenberg were assigned to Ontario, Los Angeles still allows the fewest goals per game in the league and those who’ve laid claim to a lineup spot haven’t done much to surrender it. Christian Folin and Kevin Gravel were on the ice for both Anaheim goals on Saturday, but the team has largely been happy with the play of Folin, who shuffled a puck off the goal line during a strong defensive play on Saturday, and has been encouraged by Gravel’s long path back from a debilitating off-season struggle with Crohn’s disease.

“I think he’s gone down and really worked on his game to get him back into form where he’s got his gaps back in order where he’s a really tight defender and he can get back and make plays with pucks,” Stevens said of Gravel. “He’s got really good size. I wouldn’t call him an overwhelming physical player, but he really closes quickly with a good stick, and those are the things we’d like to see from him. I think he can help you as a defender with good size, and I think he has an ability to skate pucks out of trouble and do a good job moving pucks for us.”

Gravel has played some of the most sheltered minutes among all skaters on the blue line in a limited sample size, while Folin has also been sheltered but has managed to play in the attacking end to a greater degree than all Los Angeles defenders other than Drew Doughty and Jake Muzzin.

-The Kingston Frontenacs, Los Angeles Kings fans’ newest favorite OHL team, are just 4-3-1 since acquiring Gabriel Vilardi (as well as Rangers prospect Sean Day and Buffalo prospect Cliff Pu) after dropping a 3-2 overtime decision to division-leading Hamilton last night. The two goals were scored by Vilardi, who took five shots and won 11-of-16 faceoffs. He has five goals, 14 points, a plus-six rating and 26 shots on goal in eight games since joining Kingston. And thus ends today’s Vilardi Watch. The Fronts are back in action tomorrow against Jacob Moverare and Mississauga.

-Speaking with an assembled throng of media types on Saturday, Alec Martinez attempted to draw a parallel between the state of the team and taking a car in for maintenance.

“If you’re trying to start the car and the engine won’t turn on, obviously that’s frustrating. You know, the guys have a good mindset and are confident and are—”

It was at that point that Assistant Coach Dave Lowry walked by and shared some sort of unspoken joke with the Kings defenseman. The subtle moment threw off Martinez’s train of thought and elicited a smile on a day in which there wasn’t a surplus of them around the rink.

“I was talking about taking your car to the shop, right? So, oil changes.”

He was on the verge of saying that there was a good mentality in the room that hasn’t changed even though the team has hit its seasonal nadir. Januarys haven’t been kind to the Kings, who are 34-41-13 in them over the last eight seasons.

“Quite frankly, we’ve been here before and we’ve probably been in a worse position than this before,” Martinez said. “I know I’m being a bit hypocritical here, but I think I looked at the standings and we might be two or three points out of second place in our division or something like that? So, there’s no need for panic, but there’s certainly a need to look at our game.”

And that’s the narrow precipice of the team’s current standing. They’re among the glut of teams populating the NHL’s healthy middle class, a grouping they’ve joined by dropping their last six games in regulation. The team hasn’t necessarily played poorly, but, as Martinez put it, “I think we’d be kidding ourselves if we think that we played good enough to win.”

“You look at our season, we’ve had a lot of ups and downs,” he said. “[We’ve] been very streaky, both good and bad. But I don’t think our confidence has ever wavered. I think we know what we need to do, and you can sit here and talk about it all afternoon, but the fact of the matter is we’ve just got to do it. There’s enough talking.”

Generating offense through a full 60-minute effort will again be the goal when the New York Rangers make their annual Staples Center visit on Sunday.

“Going back to that Calgary game where this started, I think we had a really good start. We had a really good start and were playing good hockey and for whatever reason, ever since then we haven’t been playing well,” Martinez said. “And you look at the standings and you know, we were at the top or near the top and now we’re on the outside looking in. And that just goes to show you that especially in the Western Conference and in this division, I mean it’s been this way ever since I’ve been here. You know, these points are crucial and things are really tight. You can not even play one night and you can drop two or three spots, maybe more. I think that that’s something, that we’re throwing away points right now. You have to play a complete game if you expect to win, especially in our conference or our division.”

Alec Martinez, on any common thread in the team’s streaky play to this point:
Well, I mean on the positive side of the streaky nature, yeah, things are going well. You’re getting contributions from throughout your lineup. You’re playing a strong team game. You’re not having these lulls mid-games. You look at our second periods in the past however many games and they haven’t gone very well. So yeah, I mean, the common theme, I think, is everyone just playing well. We talk about a lot, we don’t need one particular guy or two guys to be great, we just need everyone to be good. And we haven’t been that lately.

Martinez, on how often he looks at the standings:
I mean they’re everywhere. We’ve got them posted in the locker room and I think the standings are, at least personally, I think it’s important to have a general awareness of them, keep an eye on them. But certainly don’t look at them, not that you don’t look at them, but you don’t think about them every single day because like I mentioned, things can happen when you don’t even play, you know? So it’s good to have a general awareness and to take a focus on it, but you can’t nitpick every moment of every day looking at it. I mean, I think it’s like what John says. If you just focus on the process instead of the result, then the result will take care of itself. And I think the standings run parallel to that. If you just focus on your team game every night then you’re going to get your 96 to 100 points or whatever the historical data shows that you’re going to be on the inside and sitting in a playoff spot.