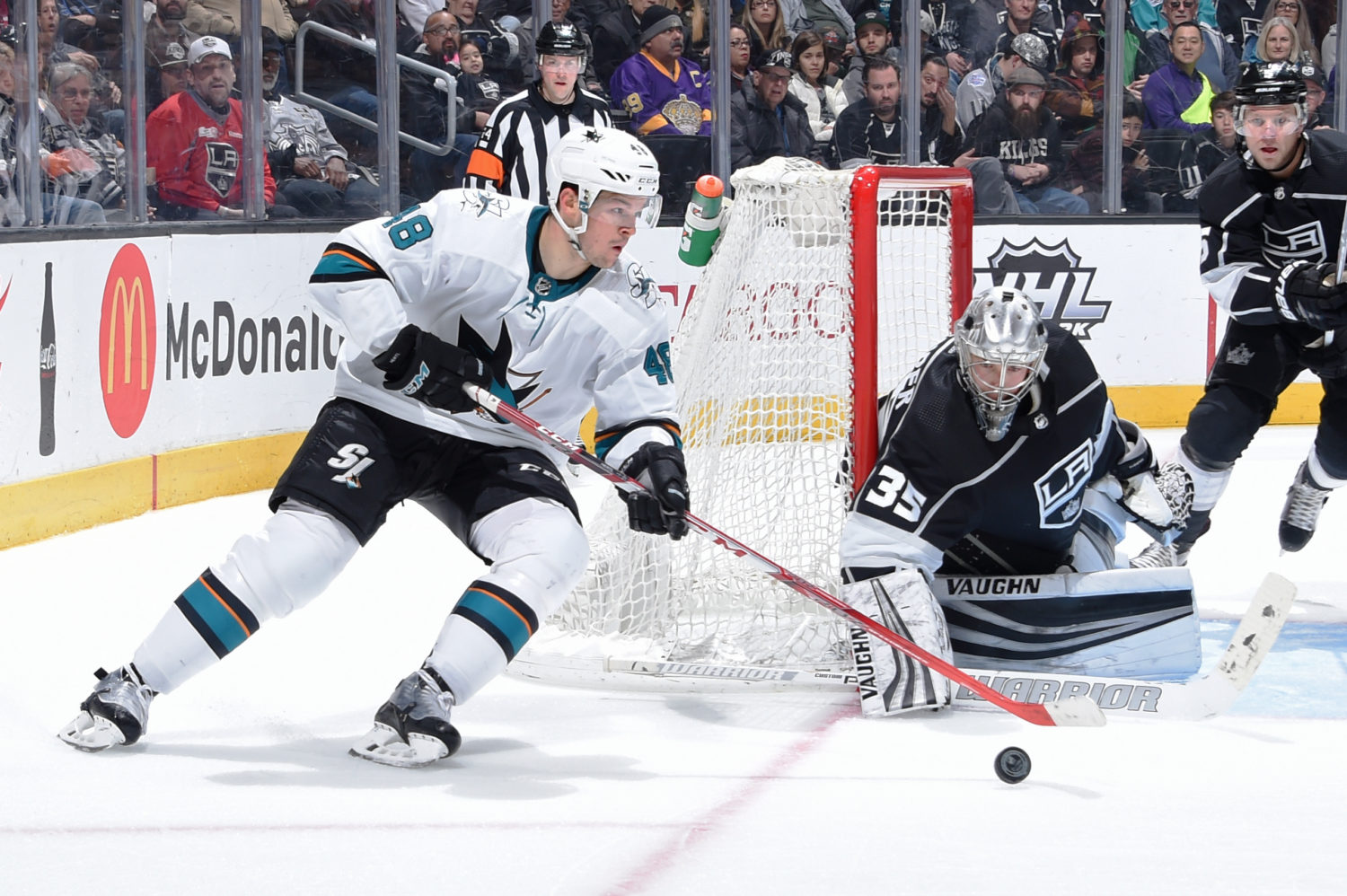 On today’s roster moves, and what he expects from Michael Amadio and Paul LaDue:
Well, Amadio’s gone down and played really well. He’s a player who went down there and just kind of took his game to another level. He did some really good things offensively, but his game without the puck has been really solid. It’s just the example of a young player who went down and … [inaudible/phone call] … and has really, really played well, so it just gives us another look. Another right-shot guy in the middle that’s got good jump to his game. Coming off the break sometimes I think it’s good, guys that have played like that, and then an opportunity for other guys to get down and play more. LaDue, Paulie’s been coming along. He’s had a solid first half of the season down there. He’s got good mobility. Gives you another right-shot option, so it changes the look a little bit.

On LaDue getting top pairing minutes in Ontario, and what the plan is moving forward:
The first step was just getting him in practice today and getting our eyes on him. We’ve been in touch with Stuttsy and we’ve watched some games down there, both on he and Kev (Kevin Gravel) when they were playing down there. Talked to Blakey and the development staff and just where his game is at. Paul, he’s just a good blend defenseman I think that can defend well and move pucks and almost have a Martinez mold where he can help you at both ends of the rink, and that’s kind of what we expect – just good, solid productive minutes at both ends of the rink from Paulie when he’s on the ice. He has the ability to play against and defend with his skill set and he has the ability to move pucks and generate either on attack or some offense with his skill set.

On the focus of today’s practice:
Today was just a really important reset day. We talked to our leadership group, and then I think we’ve gotten away from our team game a little bit at times, and when we play with a sense of urgency and are really all dialed in to the way we need to play, we’re a pretty good team. When we don’t, we usually play just good enough to lose. That’s something we want to address. Sometimes you say you need to play better and you’ve got to play the right way, and we’ll just talk specifically, ‘what does that mean?’ make sure there’s no misunderstanding, and there isn’t. It’s the importance of guys knowing that we can’t have any games where one line’s not going, or one or two defensemen aren’t going. We need everybody all the time playing the game to the maximum of their potential for us to win hockey games. This group is really honest with each other, so we’ll just touch on all parts of that, get our game connected again, get some execution back, get our legs back underneath of us after the long break there and get ready for an important stretch here now up until the All-Star Break.

On adjusting lines at today’s practice:
We’re in a situation now where we’ve lost several games in a row, so I think it’s time to take a different look at a couple things. We put Adrian on the wing last night and actually liked him there. We were concerned that taking him out of the middle would take some speed out of his game because he’s so good in the middle of the ice, but we saw that he was able to maintain that last night. He still made plays off the wall, he still had an opportunity to get to open space with speed, so we thought we’d give another look, and Lewie’s played lots of center in his career. A real responsible guy. He’s always been able to take faceoffs and just gave us a little bit of a different look there.

On Drew Doughty leading the NHL in time on ice per game:
For years now he’s been maybe not the top guy, but he’s been in the top conversation in terms of minutes played in all situation. It’s not always – I guess every team’s got one or two guys – but he plays in every key situation. He’s the first guy over the boards, and he should be. He’s earned the right to be, and he’s the most effective guy in all those situations so he’s a guy that wants to play all the time and make a difference, and I think we’re trying to get some young guys involved. A few injuries we’ve had – Marty early in the year, and then Muzz lately – his minutes probably climbed a little too much. We’d like to get that number down a little bit, and I think with the schedule sometimes, minutes can climb in that range, but I think he’s a better player if we can get his minutes down just a little bit. But Drew’s one of the best competitors that we’ve ever had here. He wants to play all the time, wants ot be on the ice all the time, wants to make a difference, and he would prefer there were no timeouts in a hockey game, no TV timeouts, just keep playing. He’s a valuable guy that can really have an impact in a hockey game, and it’s not surprising that his minutes are where they are, although I would say we’d like to get those down just a little bit. [Reporter: That’s kind of a tricky thing, because he’s never going to say, ‘I want to play less,’ right?] He always wants to play more. I think all good players do, but he’s a good enough team guy that knows when he plays less and you give him more minutes, especially with the schedule, it allows him to be a little fresher, maybe a little more involved, even one extra step getting up the ice or even on a power play, penalty kill, getting somewhere. But he’s been able to handle it. He’s a rare breed. His recovery is second to none. His ability to come off a shift and be ready to go again is as good as I’ve ever seen, and he doesn’t exude a lot of energy the way he skates. He’s such an efficient skater that if you looked at him or other guys, even a guy like Muzz who’s a bigger, heavier guy, it takes a lot more energy to get around the ice, where Drew, it looks effortless at times. He’s an important guy. If you look at him, every situation he’s played on, he’s an important guy when he played for team Canada, he’s an important guy on the Los Angeles Kings, and he has the ability to make a difference in a lot of different situations.