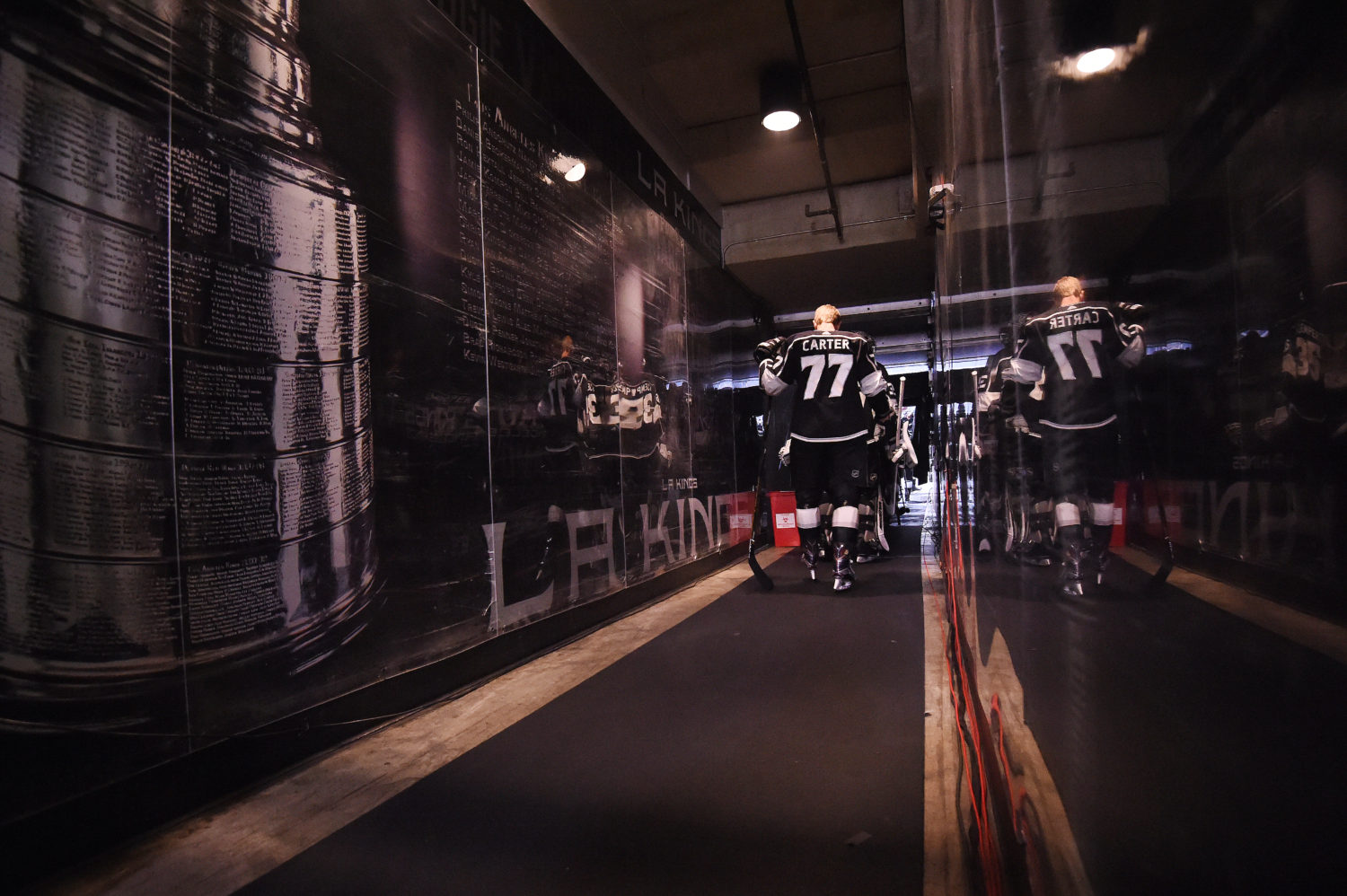 Good afternoon from El Segundo, Insiders. The Kings practiced at Toyota Sports Center at 10:00 a.m. Tuesday morning and remained on the ice for over an hour. It may have been their longest practice since training camp. “Today was just a really important reset day,” John Stevens said.

The forwards were grouped by color-coded jerseys:

-Defensive pairings were fluid; we’ll continue to take a look at how they shape up in advance of Thursday’s game versus Pittsburgh. So! Trevor Lewis is back at center, and Adrian Kempe moved to wing. “We put Adrian on the wing last night and actually liked him there,” Stevens said. “We were concerned that taking him out of the middle would take some speed out of his game because he’s so good in the middle of the ice, but we saw that he was able to maintain that last night. He still made plays off the wall, he still had an opportunity to get to open space with speed, so we thought we’d give another look, and Lewie’s played lots of center in his career. A real responsible guy. He’s always been able to take faceoffs and just gave us a little bit of a different look there.”

Jeff Carter has started to skate on his own, per Rob Blake.

There’s still no timetable yet on his return, but that’s a significant step in his recovery.

-John Stevens knows that Jussi Jokinen, placed on waivers earlier today, is a very good pro. But there are younger players the Kings are also looking to take a look at. “He’s been great. He’s been a really good teammate,” Stevens said. “He’s come in, his attitude has been terrific. He’s like another coach in the locker room. He understands the game really well, and I just think it’s a situation where maybe some young guys are taking a step. Get an opportunity to look at some young guys and see where they’re at. Muzz has been on the IR, so there are only so many spots on your team. But he’s been terrific. He’s been a really good teammate and a really good guy to have here. He’s good for us, good for the young guys, and when he played, he helped us.”

-Soo native Michael Amadio scored his first career NHL goal against the Maple Leafs, but he was never a huge fan of Ontario’s NHL team. (It’s seven hours from his hometown above Lake Huron to the greater Toronto area, and he was more of a fan of Joe Sakic and the Colorado Avalanche when he was younger.)

He’s back with the Kings after having received a phone call while walking to his apartment after returning home from yesterday afternoon’s Ontario Reign game, a 3-2 win over Texas in which he scored a third-period goal and netted the shootout game-winner. His third period marker extended his point streak to 17 games, the longest in the AHL this season.

“It’s definitely been a lot of fun, but I’ve got to give a lot of credit to my linemates and teammates. They’re helping me a lot out there, which makes it a lot easier,” he said. One of his regular linemates has been Matt Moulson, who has five goals and 24 points in 17 games and has assisted on seven of nine goals since being loaned to Ontario and making his Reign debut on December 9.

Jonny Brodzinski, who skated to the right of Amadio at practice today, had also spent time with the Moulson-Amadio connection, which should help further ease the 21-year-old’s transition to the professional game. Even Amadio admitted having a few jitters re-joining the team earlier today for practice.

“It’s still pretty exciting, and I’m still a little nervous coming up,” he said. “But it’s nice to see the guys again. They’re making me feel comfortable, so it’s a little better this time knowing the guys. It’s been a lot of fun.”

Known as a defensively responsible center, Amadio is still a player who potted 50 goals in 68 games as the North Bay Battalion’s captain in his 19-year-old 2015-16 OHL season, and followed up his breakthrough campaign with a respectable 16 goals and 41 points as an AHL rookie last year. It’s a challenge to be able to produce as a 20-year-old in the AHL, but Amadio did so while remaining on the right side of the puck.

Amadio’s 1.13 points per game in the AHL ranked sixth among players with at least 25 games this season. Of the five players with a higher scoring rate, only Tucson’s Dylan Strome and Nick Merkley are younger.

“I definitely wanted to be back up here, and it’s nice to get the call again.”

-Paul LaDue is poised to make his 2017-18 debut later this week. He was recalled immediately before the start of the season when Alec Martinez suffered a lower-body injury in practice, necessitating his quick return.

“I try not to look down on it,” he said when asked about not making the team out of training camp. “Just keep improving every day, just listen to what the coaching staff and the development staff says, and just take it all in and try to improve. Now I’m back, and trying to make a statement.”

Some of that statement is trying to show that he has improved “in all areas,” but also that he’s firmer in the defensive zone.

“Just playing harder in the D-zone and being consistent every game in the D zone is what I’ve been trying to focus on, and it’s grown since last year, and even this year down in Ontario, it’s been continuing to get better, and hopefully I can just carry that on up here and help the team win,” he said.

He totaled eight goals and 17 points in 34 games with the Reign, so the success in the defensive zone has allowed him the confidence and wherewithal to allow other parts of his game to grow.

“Yeah, I think if you’re clean down there breaking pucks out, it leads to more offensive opportunities,” he said. “You gain confidence that way, and then all of a sudden you’re feeling more comfortable on the blue line. I felt pretty good offensively this year, and I’d like to keep that going as well.”

John Stevens flew to Grand Forks, North Dakota to visit with LaDue over the off-season, allowing him to get a clearer sense of his defenseman who turned 25 in September. He spoke about LaDue’s skill set and how closely he worked with him last season as the Associate Head Coach who worked closely with Kings blue liners.

John Stevens, on how regularly he worked with Paul LaDue last season:
Daily. … With all those guys. It’s something I love the most. When young players come up and you’re an assistant coach, we usually sit down and watch their games, every game together, watch their shifts. Just talk about their game. It’s not like corrective stuff – ‘What are you seeing here? What was your read? Did you like your positioning? This was really good. What do you think you can do better?’ They have questions sometimes. They see things that maybe you didn’t see as a coach, so to me those interactions were really productive, and it becomes very clear what the expectations are, how we want to play, what we think of him as a player, what our expectations of him are in terms of preparation and compete, so we’ve been through all that, yeah.

Stevens, on any sort of acclimation process for Michael Amadio and LaDue:
No, there’s a lot of familiarity with the organization and how we play and how they play down there and things that are important. I think Stuttsy and I, I think across the organization, believe certain things are really important to players in winning, and those two kids have been here long enough that they’ve spent a lot of time, training camps, time with both teams, so I don’t think there’s any fog in terms of what’s expected of them as players or how we play. The other thing with Paulie, I had a chance to go see him in his hometown last year in the summer and see him on his turf, where he trained, where he’s from and all that. Sometimes that’s really good, too, in terms of getting an understanding of a player. I wanted to know more about his family, so the relationships with both those kids – I did the same with Kev in Minnesota. Those kids are really good, quality kids, number one, and we’re optimistic about their potential.

-Sadly, Dolores O’Riordan, the lead singer of the Cranberries, passed away suddenly Monday at the age of 46. Dieter Ruehle, who is an absolute gem, has been known to play their material at Kings games. In addition to Dreams, which he played during a first period stoppage, he covered Linger right as the Staples Center doors opened. It was a stirring tribute. Stick taps to Annie Merovich and the Kings’ game operations for passing this along: