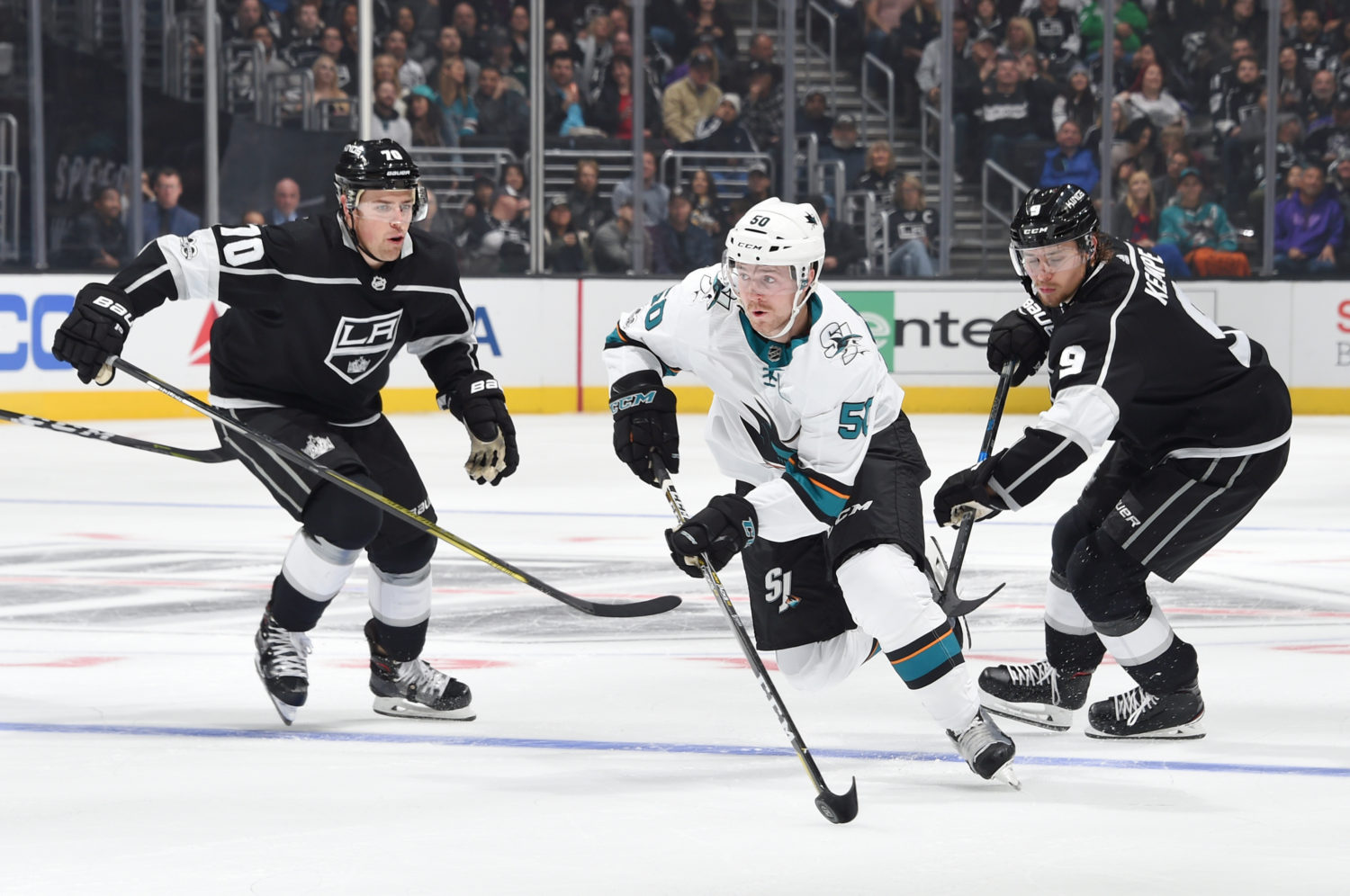 Good afternoon, Insiders. The Kings on Sunday skated at Toyota Sports Center, where forwards were color coded as such:

-Trevor Lewis, who weathered a pair of hard hits from Jared Boll and one from Kevin Bieksa in Saturday’s loss, did not practice due to what was described as a maintenance day. Asked whether he’s expected to be available for Monday’s matinee against San Jose, John Stevens said, “we hope so, yeah.”

-Practices the day before afternoon games can often serve as hints towards the following day’s starting goalie, but it’s not completely clear whether the #LAKingsGoalieTweetOff applies. Jonathan Quick was the first goalie off, but neither goalie really lingered on the ice or faced a glut of extra work. A few minutes before Quick left the ice, he spoke with Stevens at center ice.

-Jonny Brodzinski, who was assigned to Ontario at the outset of the bye week, has been recalled. He has six goals and 14 points in 11 games with the Reign, which included two goals and five points in three games over the past week.

-Jake Muzzin (IR/upper-body) is very close, but it’s not yet clear whether he’ll play Monday afternoon.

“I haven’t talked to the trainers yet,” Stevens said. “We got him out there, got him more involved today with the team. Wasn’t a lot of resistance today, but still wanted to just get a feel. I mean, the shooting, twisting, turning, all those different motions that he got put in situations today, we’ll see how he responds.”

Muzzin said that he suffered his injury in the 4-3 win over Vancouver on December 30 and tried to play through it, which he did for a pair of divisional games. He registered assists against Edmonton and Calgary, logging 20:08 and 24:06 in the two games before being placed on IR prior to facing Nashville two Saturdays ago. By sitting out the last two games, his consecutive games played streak ended at 281 games.

“Obviously you want to be healthy and play as many games as you can,” he said. “The training staff and everyone all comes together. It’s a full team effort to keep every one of these guys healthy and it’s on yourself, too. And sometimes fluky injuries are going to happen. When you play physical, and especially in the West there’s a lot of hitting, a lot of tough games, I mean, [stuff’s] going to happen.”

Muzzin said that he’s feeling better than he did yesterday and that the discomfort has been manageable. It now comes down to time, and it’s doesn’t do the team any favors that Monday’s game is a 1:00 p.m. start.

“We’ll wait and see how he is today,” Stevens said. “Sometimes you’ve got to let him get through the day. He feels good now. I’ll check in with him later today and see how he’s doing.”

Kempe, who left the ice and was checked out by a concussion spotter, returned and finished with just over 11 minutes of ice time. That left the Kings short on centers during a first period stretch of game time that included a power play, but Stevens didn’t have any issues with the match-ups down the middle.

“I thought for the most part we were fine there,” he said. “I don’t think the center ice position was an issue. I thought more of the wall play was an issue for us. I think the wall play in all three zones was the difference in the game, so we’d like to get better in that area, but I think down the middle, Kopi’s Kopi. He’s a star in the league that can match up against anybody, and I think he was ready to go last night.”

-San Jose lined up today with forward groups of Meier-Thornton-Pavelski, Labanc-Couture-Hertl, Boedker-Tierney-Donskoi and Karlsson-Goodrow-Ward up front. Dylan DeMelo, who was on IR with flu-like symptoms, is expected to be activated before tomorrow’s game, per Gideon Rubin of the Associated Press. (If you ever meet Gideon, ask him to list the longest Cal League games he’s ever covered.)

Doug Wilson confirms he is working with Paul Martin and his agent “to explore options.” Martin won’t go on the road trip, and could play more games with the Barracuda. Waivers also a possibility.

Martin, who has spent time in the AHL on conditioning assignments, has appeared in three games with NHL-San Jose this season but hasn’t played with the big club since December 7.

The Sharks, who were 1-2-2 heading into their bye week, resumed play with a 6-5 overtime win over Arizona on Saturday in which Joonas Donskoi tied the game with 15 seconds remaining and Marc-Edouard Vlasic won it in overtime by crashing the net and pushing a loose Joe Pavelski rebound past Scott Wedgewood.

–Via Helene Elliott, Pierre Turgeon was not with the club last night as he traveled to Chicago to watch his son Dominic’s NHL debut with the Detroit Red Wings. The 21-year-old Turgeon, a third round pick by Detroit in 2014, had nine goals and 23 points in 40 games with AHL-Grand Rapids this season.

Congrats to Dominic Turgeon, son of Kings assistant coach Pierre Turgeon, for making his NHL debut on Sunday with Detroit. Played 9:01, had one shot, credited with three blocks, per NHL box score. 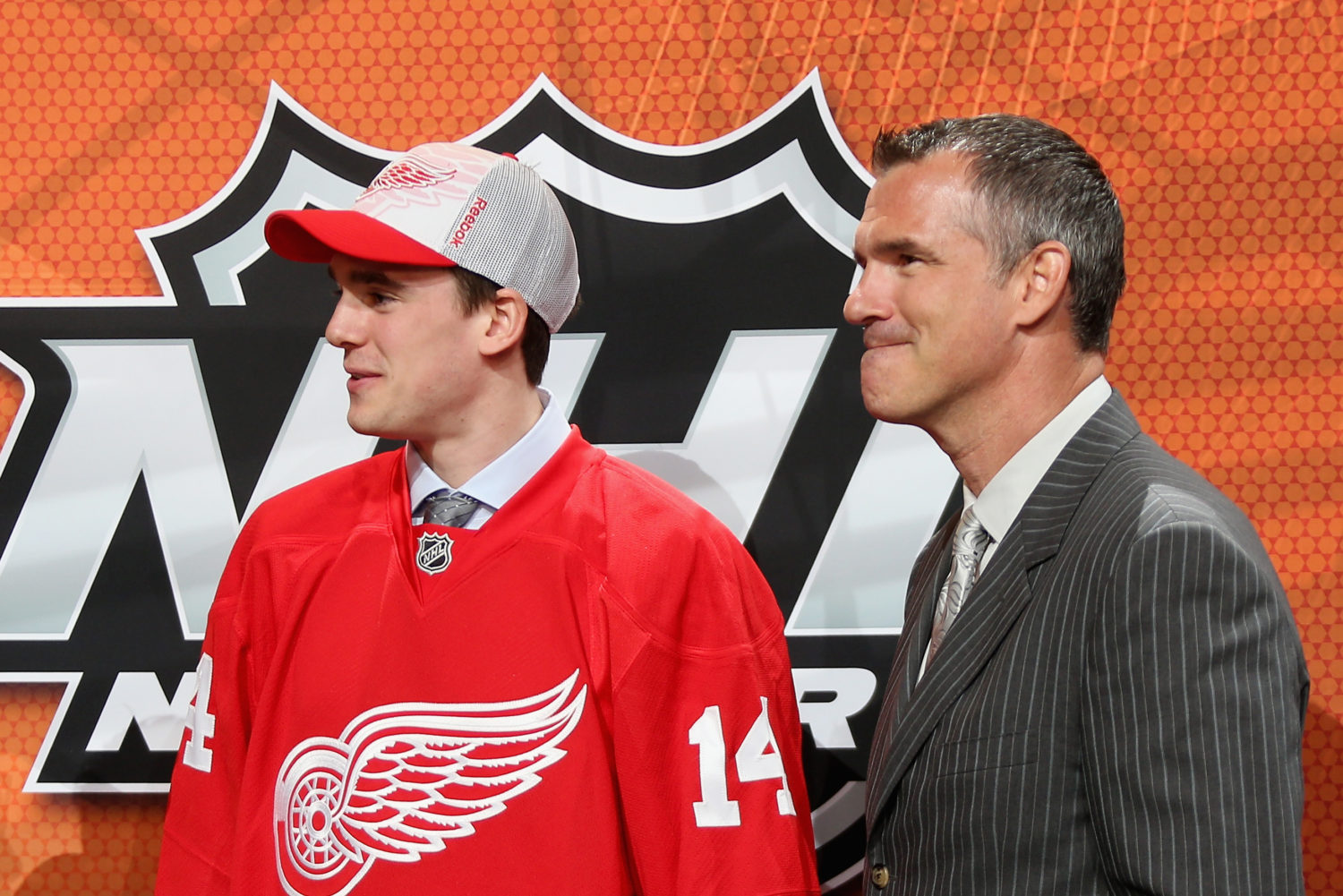