Stevens on the first post-break practice, second half emphasis, more 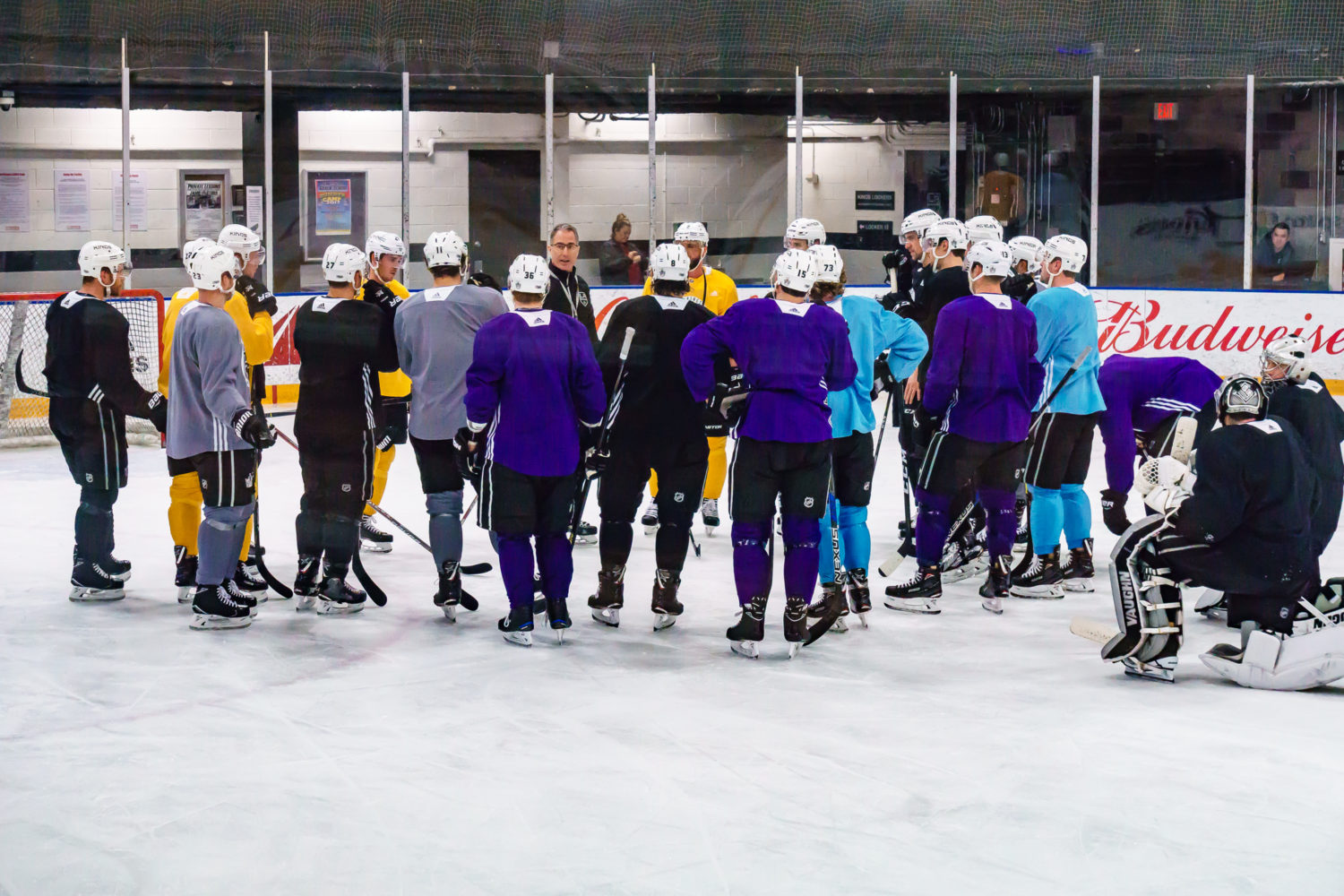 On Anze Kopitar, Drew Doughty and Jonathan Quick being named to the All-Star Game:
We’re obviously thrilled for those guys. I think every situation’s a little bit different. For Jonathan, coming off a whole year away and coming back and playing at the level he is I think is really impressive. I think Kopi really wanted to come back and have a bounce-back year, and I think he’s done that. I think Drew has been on top of his game for quite a while, so it’s great to see those guys rewarded for their quality play to this point. I think all three of them are a huge part of our success in the first half of the year, and I know they’re excited that the three of them get to go together. They’re good buddies, all of them, so we’re certainly thankful that they get recognized for their first half performance.

On whether there was “freshness” in the first practice after the bye week:
I think when you’re cruising along you’re really sharp, and when you have days off like today I think there’s some rust you have to work off and guys have to kind of work through the break and get themselves up and going again, but I think that’s expected. I think the execution with the puck and those types of things, it’s going to take a little bit of time to iron it out, but I think the mind needs to be sharp, and I think the guys enjoy the break. I think they come back with a little renewed energy. Everyone looks at the break different ways. Sometimes it’s a good time, sometimes a bad time. The break is the break, and you have to deal with it, so you try to handle it as best you can and come out of it and get some points. [Reporter: A lot of teams other than yours have struggled those last couple games, right before the break. What was the sense – what was going on with your group in those last two games right before?] I don’t know, I wouldn’t put the onus – sometimes your focus may be on the break, and you see the break coming, but in our case, I actually thought defensively we played pretty good against Nashville, just had some self-inflicted wounds and some discipline issues that caught up to us and just some mistakes that we don’t traditionally make that ended up chasing the game a little too much, but I thought we gave ourselves a chance to win the game, which is a good thing. So, I don’t know that the break had any effect on us in that game, other than we can execute a little bit better in critical times during the game.

On any particular point of emphasis in the second half:
Yeah, all of it, to be honest with you. We want to continue to try and build our team game. We want to get better defensively. I think there’s parts of our game where we can get better. I think we want our gaps and our ability to hold lines better, we want to continue to play faster in the neutral zone, and I think one area we’d like to continue to focus on getting better is our forecheck. I think all those areas are going to help us. We want to be a good defensive team that has the puck more and can attack more.

On the first game out of the bye week being a Kings-Ducks rivalry game:
They’re big games. I mean, any division games are big games. They’re big games for both teams. Both teams are coming off the break. They’re a much different team than the last time we saw them just because of their health. They’ve got a lot of their guys that had been out previously, so they’re as healthy as they’ve been all year, probably to this point, so it certainly gives them a different book. But, they’re big games. They’re division games, there’s a lot of implications in the standings, and obviously with coming out of a break and then not a very long time before the All-Star Break. They’re important games.

On the team’s “checklist” of how to play responsibly in three-on-three overtime:
Well, we have a list of things that we feel are important over the years, and they haven’t changed. I think, number one, you’ve got to possess the puck, so faceoffs are important. Taking time and space away from your opponent are important. We think that your ability to get quality line changes are important. One thing you see three-on-three where you’ll give up a zone to maintain possession, where it’s a little different than five-on-five or even four-on-four play, and you’ve just got to manage the hockey puck. I think the guy with the puck has a lot of responsibility. If you’re going to shoot the puck, you want to make sure you hit the net. I don’t think you want to get a guy that’s going to totally just go one-on-one, because it usually leads to odd chances the other way, so I think a real responsible game is important. We felt those things are important all along, and I don’t think they’ve changed, and try to take advantage of turnovers and fast break opportunities.

On whether the balance of conditioning and “X’s and O’s” in the first practice after a layoff:
Probably the two things we tried to get accomplished today was just working out some of the rust and getting lots of touches individually just to try to get your execution back, and then obviously structure and detail as a group. We had a video session this morning just to go over detail, get them thinking about detail again, put some things in practice that would have to do with their good, solid team play, and then hopefully lots of touches to get some of the execution back in place after time off.

On managing the time between warm-ups and puck drop tomorrow during Bob Miller’s ceremony:
It’s a little bit of a tough one, just because there’s nothing you can do about it in terms of you get your warm-up in and then you’re coming out. But I think it just becomes a mental focus of just playing simple early, keep the shifts short early. There’s not a whole lot you can do with the time spent other than mentally prepare. [Reporter: Do you meet as a team during that time, or are guys just on their own?] They’ll be in the room together. Guys will take some of their gear off. There’s always drinks and food and fruit and all that kind of stuff available for the guys. We will adjust our meeting time sometimes when there’s extra time in between just so that the team can stay as normal as possible. The time of the start doesn’t necessarily matter to the guys. It’s when their routine gets in motion, so when that gets affected, then you’ve got to try and make it as normal as possible for them, but I think once the game starts, you try to be real simple early. Let the puck do the work for you, try and get your legs underneath you and hopefully just keep it really simple where you’re not forcing yourself into unnecessary mistakes because you’ve had a big layoff between your normal routine.

On whether he’d prefer players to stay home during the bye week, and whether trust is involved:
No, I think there’s an enormous amount of trust. We had Matt Price put together some key points and some suggestions for how they should handle their break – some total time off, and then get active again – and try and give them a plan to follow. It doesn’t matter if they’re here or somewhere else. I think it’s good for the guys. Just to hang around five days and not do anything is probably not great, either. Some guys went not far away, some guys went a little further away, but I think at the end of the day, if they got a little mental break away from the game, stayed active coming back, I think a couple days back on the ice, they should be able to get back up to speed. We’ve got a few practice days coming after the San Jose game, so I think it’s important. Mental preparation at this point is as important as physical preparation, but for sure there’s a lot of trust in the athlete in terms of taking care of himself, being prepared to come back and play and knowing how important these games are coming out of the break.

-Two quotes on Jake Muzzin and one quote on Alex Iafallo were withheld for today’s practice report.
-Lead photo via Jon Bradley