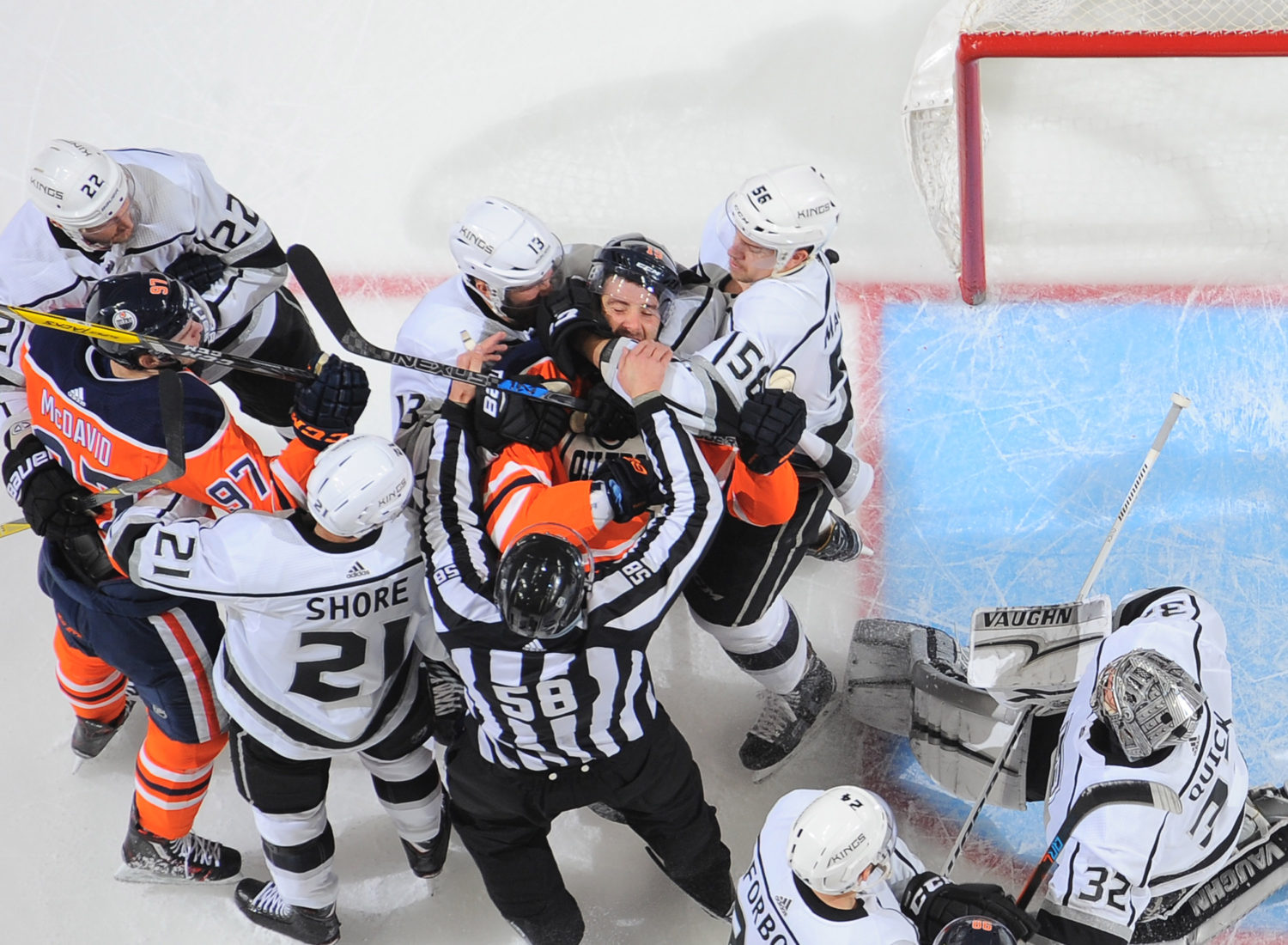 Dustin Brown, on the overall effort of the team:
I thought we had a really solid effort. First period was really good. I mean, other than McDavid—I mean, he’s McDavid so he’s going to get looks and chances and create a lot for them—but we had a lot of good looks. I thought we stuck with it. And we got big contributions from Andy (Andreoff) who’s been out of the lineup and that’s what you need to kind of win on the road. You need everybody. I mean that jumpstarts us and obviously the power play hasn’t been great for us this year, but I think it’s always one of those things—you don’t need a great power play, but a timely one.

Brown, on whether there was a “payback-mentality” after Patrick Maroon’s hit on Doughty:
That’s part of it. Especially when it’s one of our, probably our best player. But probably more so, divisional game, we can fisinsh the game in the first five. That’s what we did.

Brown, on what he thought about the hit:
I didn’t really even see it live. I just saw it on the jumbotron. I mean, it’s one of those puck’s right there, but he doesn’t touch it, clip to the head. So those plays happen.

Brown, on whether it’s safe to say that it takes a lot to get Drew off the ice:
Yeah, obviously that one, the league–the way they do it now– he doesn’t have a choice. That’s probably why the rules are in place because players won’t do it themselves.

Brown, on whether it was comforting seeing Doughty back in the lineup:
Yeah. I mean you don’t want to see anybody get hurt, but it is what it is. We’ve had to battle injuries every year. Year-after-year that’s part of it. That’s part of the grind.

Brown, on what went into the team-wide effort to shut down McDavid:
I think we got above him a lot and then he’s so fast that if you get below him, he’s gone. Dewey (Doughty) did a really good job one-on-one with him, but we had a lot of help. He made a lot of good plays through seams, but we had guys with sticks. I think early in the first, they had one where it would’ve been a tap in, but we had guys with sticks in their lanes. And that’s what you need to do against a player like that. You’re not going to shut him down per-se and it’s not going to be a one-man effort. It’s going to be a collective effort. Try to get the puck out of his hands and make other guys beat you.

Drew Doughty, on playing a solid road game against a Pacific Division opponent:
Yeah we played well tonight. You know, big win by the team. Everyone played well. Every single line was used a lot. All the d-pairings were used a lot. So it was a great team effort and a big win.

Doughty, on how he’s feeling now, after the hit by Maroon:
Yeah, I’m feeling alright now. You know, obviously just the typical when you get hit in the head just headaches and stuff like that. But passed all the concussion tests and pretty fortunate I was able to get back out there.

Doughty, on whether there was a “payback-mentality” during the five-minute power play:
Yeah for sure and first off, Forbs did an amazing job standing up for me and standing up for the entire team and you know, when stuff like that happens your team just comes together, not that we were ever apart, but you know our team came together. And then scoring three goals on the power play to really shove it up their butts was really awesome.

Doughty, on how long the concussion testing takes:
Yeah it takes a little while. A lot of tests and stuff like that. Yeah, it took a little while. And obviously I would’ve liked to get out there first, but when you get hit in the head, that’s pretty important stuff.

Doughty, on whether he saw Maroon’s hit coming:
No, I didn’t see it at all. Yeah, he just got me right in the head and I didn’t even have the puck. That’s why I was like so shocked by it. But you know, I’ve known Maroon a long time and he’s just trying to finish a hit and I don’t know that he meant to try and hurt me or anything like that. So you know, I forgive him and that’s it.