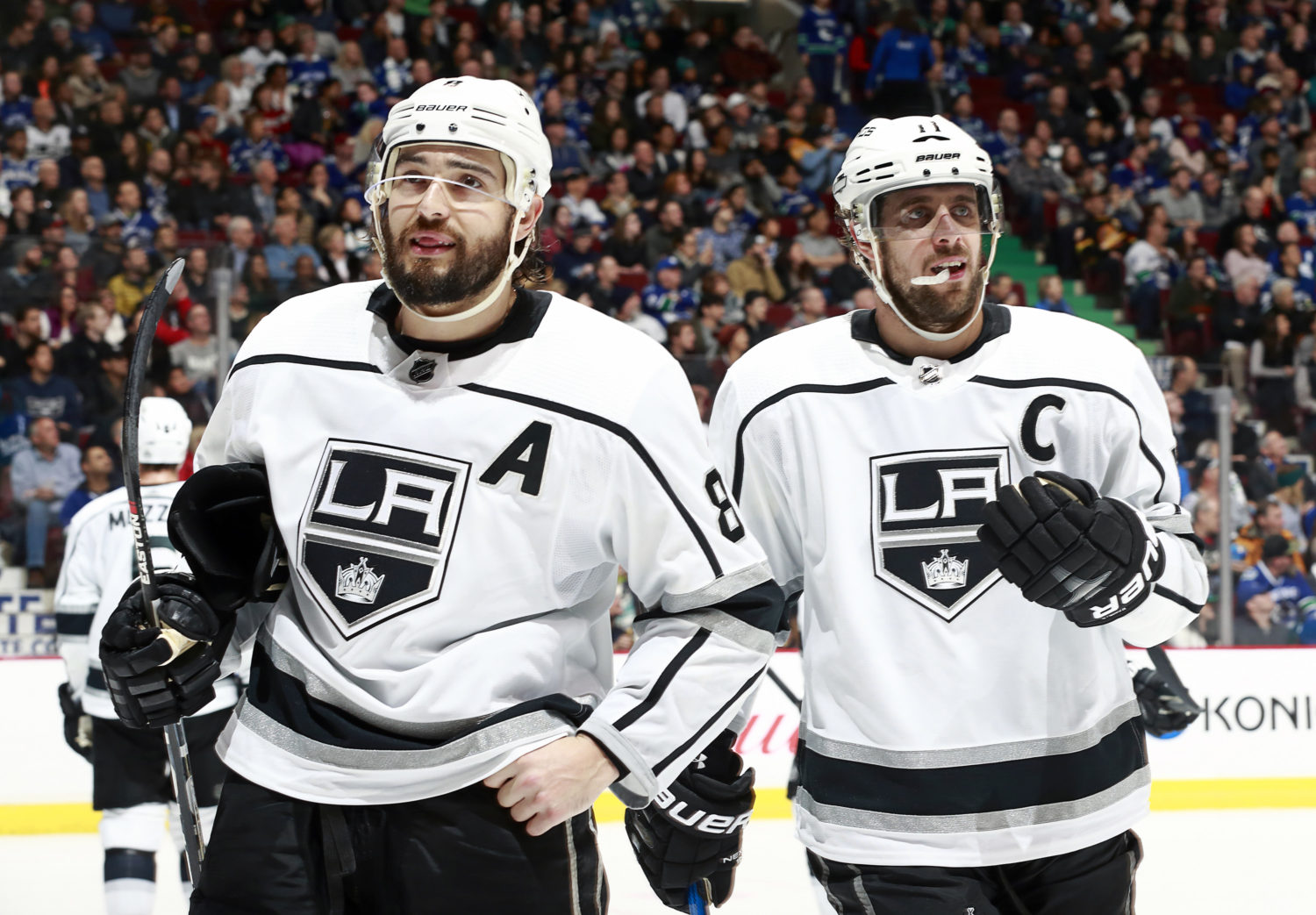 On how the team transitioned from being a “slower” and “grinding” team:
We have changed our personnel a little bit. I think with the addition of Kempe and Iafallo in our lineup, just that alone has increased our speed in the forward group. I think especially in Adrian’s case in the middle of the ice, I think it makes the line faster, and then when Dave and Don and Pierre came on board, the one thing we sat down and talked about was just playing faster. We just felt if we were a little bit more predictable to ourselves, still worked back and were available but did things quicker, made plays quicker, got our feet going up-ice quicker – I don’t know if I’d agree we were slow before. We still tried to play fast. But, clearly, with the way the game’s going and mobility of teams on the back end, we wanted to get faster by adding some speed to our lineup, but we wanted to get faster by doing things faster as a group. [Reporter: But you also had that defensive foundation already in place, right? For all those years.] Well, for sure. I don’t think you can ignore it. Teams that want to check win. I think a huge part of the success of this franchise in the last 10 years has been guys like Kopitar and Doughty and Brown – you can go down the line. Toffoli. Our best offensive players have been our most committed defensive players, and that leads to a lot of winning. And you’ve got a great goalie in Jon Quick. Guys want to play for him. He’s a great teammate. He has a lot of leadership on the back end. I think he just exudes the fact that keeping the puck out of your net’s important, but we have our guys extremely committed to that. Always want to get better in other areas, but that’s always going to be a foundation of success.

On whether he’ll reference Edmonton’s 5-0 loss to Winnipeg Sunday with his players:
It’s a hockey team that’s going to be really ready for us. We think Edmonton’s a really good team. They’ve got some world class offensive players. They’ve got size. They’ve got grit. They’re well-coached. We think they’re a really good team, so if anything else, that just stirred the beehive there, and we know they’re going to be ready, and we have to be ready. We try and make our team aware of the tendencies in people we’re play against, but really focus on our own game. That’s no different tonight, but knowing that the start of the hockey game’s important.

On whether it’s difficult to get Drew Doughty on the ice against key players on the road:
Not that hard. Just play him 30 minutes. [laughs] Yeah, Drew’s a guy, I think you’re trying to manage your minutes, to be honest with you, because you want him fresh. I think he’s more involved up-ice when he’s like that. He kills plays quicker when he’s like that. But he plays in all situations. It’s a little easier to get your D on and off the ice sometimes, especially if you’re managing the puck well, getting it deep. He does a good job at understanding what the match-ups are. Managing his shift length, Dave does a good job of it, and I think we have other guys that we’ve learned to trust in situations like that. Marty’s done a great job in those situations against top guys on other teams, as well. But, Drew’s going to play a lot of minutes, we know that. He gets out there in a lot of key situations, a lot of D-zone draws. That usually leads to being on the ice with good offensive players.

On whether there’s a competition for minutes among players on the fourth line:
I think there’s a competition all over our lineup for ice time, whether it’s special teams, even strength, who’s playing where. I think on that line, what we’ve really tried to do is make sure we communicate with guys coming in and out. Sometimes it’s just a lineup decision. Sometimes a guy comes out where we like his game, and in Andreoff’s case last time, Cliffy got healthy. We liked Andy’s game. We didn’t take him out because we didn’t like the way he was playing. It was just a numbers thing. Or, if a guy comes out and there’s a reason for it and there’s areas we need him to get better at, we’ll him that as well. But sometimes it’s just a lineup decision, and sometimes it’s a performance decision, but at the end of the day it’s good to have depth, and I think we have depth at the forward position.