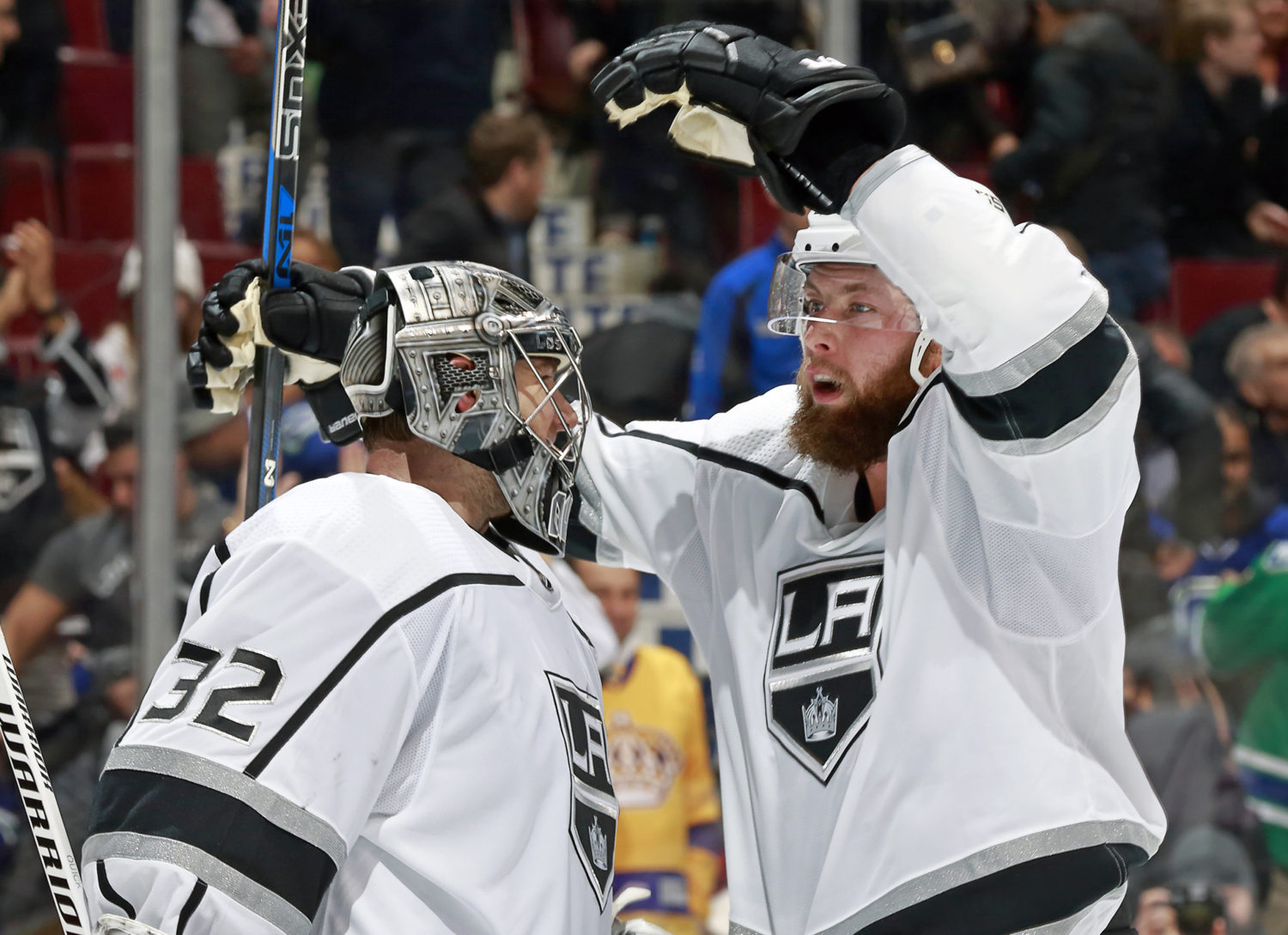 On structuring the schedule with an extra day before the Edmonton game:
Well, we really spent a lot of time on the schedule. We looked at trying to do other things. We tried to go up to Whistler, we tried to have practice up there. We kind of thought about going back home. There wasn’t enough time, so we just decided we’d stay here. We had a couple days of practice and really wanted to get a lot of power play work in today. Practice tomorrow, get on to Edmonton. More video work, lots of prep stuff we’ve got to get done. Haven’t seen a lot of Edmonton. Obviously, we haven’t seen them a whole lot, so we have a chance just to watch them. Nothing different. Groundhog day. [Reporter: Is it strange, too, when you’re in a road game, you have a day off after, and there’s no rush, there’s no panic to get out and get to the plane. It’s almost like a home game in that sense, the routine.] It’s just different. The holidays, this is kind of a strange time of the year. We looked at all the options. One thing, you’re not checking out of the hotel, coming to the game. Especially with a 7:00 game, I think it’s a little less stressful. You’re just getting dressed, going to the game, knowing you’re coming back there. Had a meal back at the hotel last night. Guys could go back and relax and just hang out for a bit. I thought that was really good. I thought today’s practice was good just in the sense that you don’t often, during the season, especially when it gets heavy, just get a day like today just to work on one particular part of your game. Usually you’re trying to touch all parts of your game, so I thought it was a really good day for that, and I thought the guys embraced the idea really well, and then we’re getting back to a team game tomorrow and start worrying about Edmonton.

On whether he thought the team showed “good character” in the win over Vancouver:
Very much so. I actually thought we played really well last night. I really liked the way we played. It was interesting – one of you guys brought it up, it was probably a month ago. We hadn’t scored the first goal a lot, and I think when you look at statistics in hockey, and certain things do have a big impact in the outcome of the game, I think the one thing this group does a really good job of, they don’t let one instance dictate the outcome of a hockey game. We have a power play to start the third period, they end up scoring at the end of it. It’s like, what more could have gone wrong in that situation where momentum shifted? But then you come right back, you score, and then you score again. You get the lead, and then you lock it down, and that’s the end of it. So, you say, ‘you gave up a goal,’ well, it doesn’t matter where you gave up the goal, you gave up a goal, right? There’s still time on the clock, so don’t worry about what’s happened, worry about the time in front of you and try and make a difference. I think this group has done a really good job of that. I think our leadership has done a really good job understanding that. I think our goalie understands that the next big save might be a difference maker, and it’s allowed us to get points in a lot of situations.

On what changed when compared to the “approach” to the Vegas game:
I liked the approach to the game against Vegas. I thought we had a really good start, I just thought we got away from our team game after we had a really good start. I just want to see a sustained team game for 60 minutes. Mistakes are going to happen. The intention to play the game the right way, if it’s there the whole time, we got totally off-track against Vegas. And they deserve credit for that, but we feel we went from playing the game we wanted to play to allowing them to play the game they wanted to play. And they can do that to you, but we could’ve done a lot more to prevent that, just by the decisions we made with the puck, for sure. [Reporter: And that was all corrected last night?] It was way better last night. Our ability to move pucks to speed quickly, willingness to get pucks in behind, we were may more organized in our attack, our forecheck was more aggressive, but smart aggressive. We had five guys forechecking and not two and three. When you think that happened, I mean, I think we went through a stretch where we had six or seven faceoffs in the O-zone in a row. We had short changes, we had fresh people on the ice, and to me, those are the types of situations that can really build momentum in a hockey game. I want to say we went through a whole rotation and a half, like, all on O-zone faceoffs. I think it was six faceoffs in a row. A couple icings, but then changes. Pucks to the net, faceoffs. Those become fresh, really quality minutes for your hockey team in those situations and can really tilt the ice in your favor.

On the power play goal:
I thought that was a great execution of a rush play. Some of the things we’re trying to get established, and on top of that, I thought Kopi’s unit did some really good things on the power play at the end of the period there to create some really good looks with some opportunities at the net. Some really good plays with Tanner in the middle of the box there. I think those opportunities are there. Puck recovery is getting better. Even though we didn’t score on that one, it gave us some momentum.

On Adrian Kempe’s performance against Vancouver:
I thought that line was really good last night. They just had chemistry, they were really responsible, and some of those rush plays started deep in our zone – the one where Adrian was a good support guy in the middle of the ice and attacks with speed, and when he attacks with speed, he’s a really tough out for the other team’s defense. And then if he’s getting taken away, he’s got Tyler on one side and Gabby on the other. When they’re skating the way Gabby was skating last night, and Tyler’s going to go to the net, I thought that line was really good for us. They made a great play coming out of our zone to end up with a breakaway chance there. They had some really quality opportunities there just from playing the game the right way and plying a real responsible game, and I think when they do that, they have the puck more. I liked the whole line.