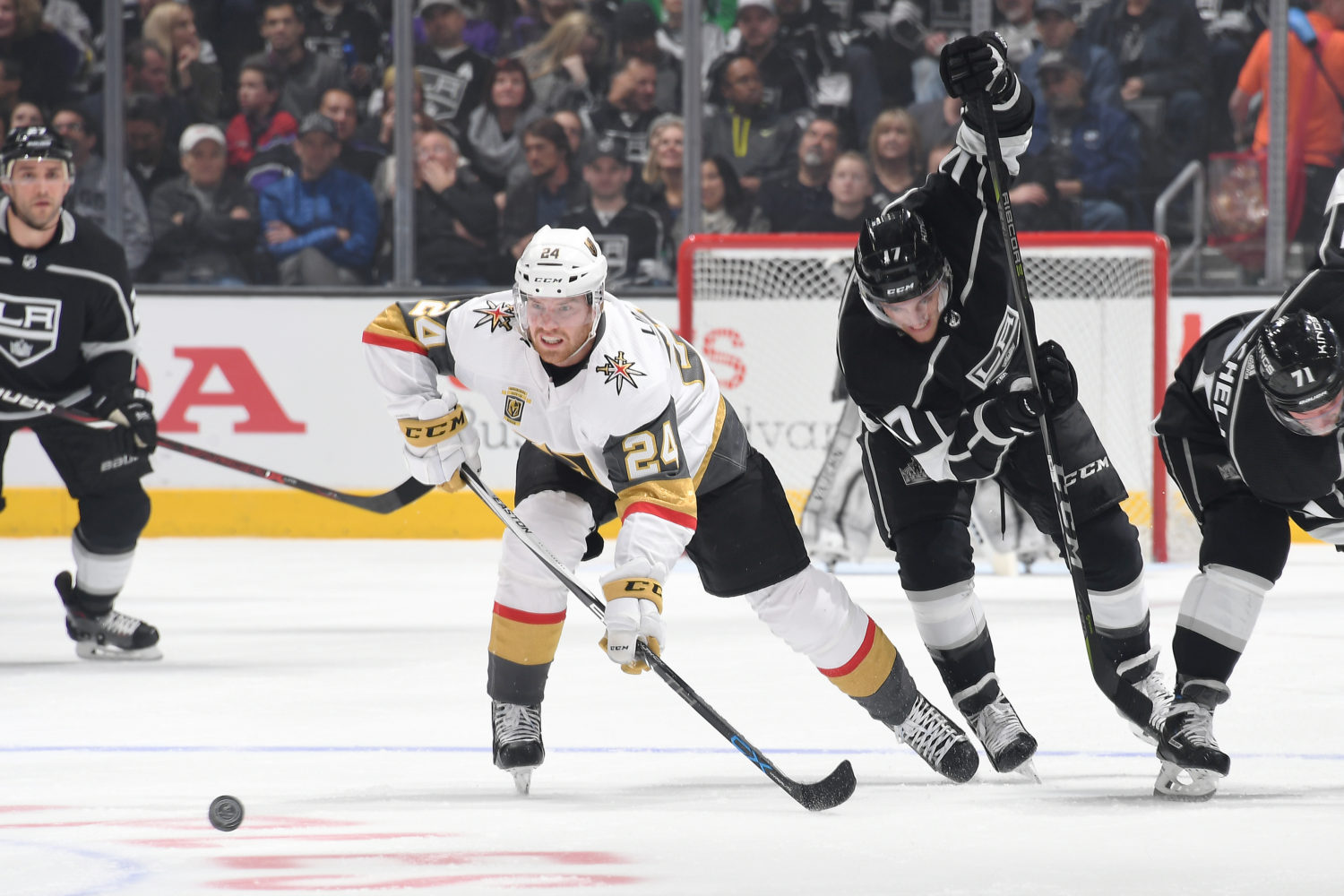 Gerard Gallant, on coming from behind to win in the past two games:
I thought again, we started a little slow, but we really played good hockey in the last six or seven minutes of the first period and then I though the second period was our best period of the year. We really played well and we really played fast.

Gallant, on whether winning against tough opponents is a good way to build confidence:
No, I mean they’re all tough games and like I said, you come into a building and LA was two points behind us in the standings tonight and it’s a battle. You know you’re going to come in and play against a physical team that’s played really well lately. So we’re really happy with the way we’ve played and there’s good challenges. For us to come in on this road trip and play really well in Anaheim back-to-back nights and play the way we played, they should be proud of themselves, but they’ve got to get ready for the next game. Now these games are over and you can move onto the next one.

Gallant, on rallying back in overtime after the Kings tied it up late in the third:
You know what, LA’s a good team and they didn’t get a whole lot of scoring chances in the second period and then in the third. But when they had that power play and when they got that goal late in the game–I mean it was a good play. The defenseman made a good pass, a no-look pass. And one of our guys broke his stick and was coming to the bench to get his stick so there was an open guy and you know what? They tied it up 2-2 with four minutes left to go. Big deal, move on, and keep playing the game.

James Neal, on emotional ups and downs throughout the game:
Yeah, I mean you never want to see them score, but I think the way we’re playing, we felt good for 60 minutes. They had a nice goal there to tie it up, but I thought we got back to our game again and were solid.

Neal, on getting back-to-back wins:
Yeah, two quick wins with tough games, two division games. Two heavy teams so you know they came out hard and started the game quick, and they did in Anaheim. And I thought after the first ten minutes we kind of took over last night and tonight kind of felt like the same too. So loved the way our team was playing. I felt like we were relentless on pucks, we were on top of them all night, and creating scoring opportunities.

Neal, on beating division rivals:
Well you have to be, if you’re in the division, you’ve got to be strong. That’s why you fight, for the playoffs–you want to start at home. So two hard games coming out of the break, I thought we played really good, really well. So we’ve got to continue that and I like the way we’re building, the way we’re getting better as each game goes. So good job.

Neal, on whether the team is aware of the precedents they’re setting as an expansion team:
No, I mean only when I read them after the game like on Twitter or when you guys mention them. So it’s fun. Guys are enjoying each other and enjoying being around the guys every day. Our team’s coming together more and more just as our play gets better and it’s fun. Every day is fun. So credit to our organization, everything’s been great all year and it shows on the ice.

David Perron, on whether there’s any animosity between him and Dustin Brown:
They beat me, well not me, but the team I was on two years in a row to end our season. Obviously Quick is a real competitor out there and [I’m] trying to get in his kitchen
on him as much as I can. I’ve always throughout my career, I feel like I have to do it. I feel like their guys get on their team and they start hating me and they don’t even know why. You can ask Nabber (McNabb) about this one. But, it’s a lot of fun. And obviously Brown pushed me pretty hard on the first shift, like you said. And it’s a huge night for him, obviously the celebration. Lot of respect goes to him for a thousand games on the same team. And he just plays his game. Obviously they were probably going to let go a couple tonight because it was his night, and I totally respect that.

Perron, on whether it was “extra special” to beat Quick:
Yes, definitely. It’s fun to score on these guys. He’s honestly my favorite goalie to score on and it hasn’t happened that much so hopefully there’s more to come.

Perron, on getting the game-winning goal in overtime:
Yeah, just the way we played, I thought we were the better team. I thought for the most part we out-played them, out-shot them. And it’s tough for me to believe that against the LA Kings because all my career it hasn’t happened that much. It was a good performance by us and it felt like we were going to get the two points and we did. We’re obviously satisfied with our performance.

Perron, on what allows Vegas to keep beating tough Pacific Division teams:
We just keep playing our game. I don’t think we look really at who’s on the other side. But of course, for us, tonight was one of the bigger games of the year. Knowing the standings situation and things like that, knowing that we get a little bit of a cushion and that we won’t be able to rest or get ahead of ourselves, that we’ve got to keep working hard to kind of keep the first place. But it’s been fun to play against divisional rivals and win games.