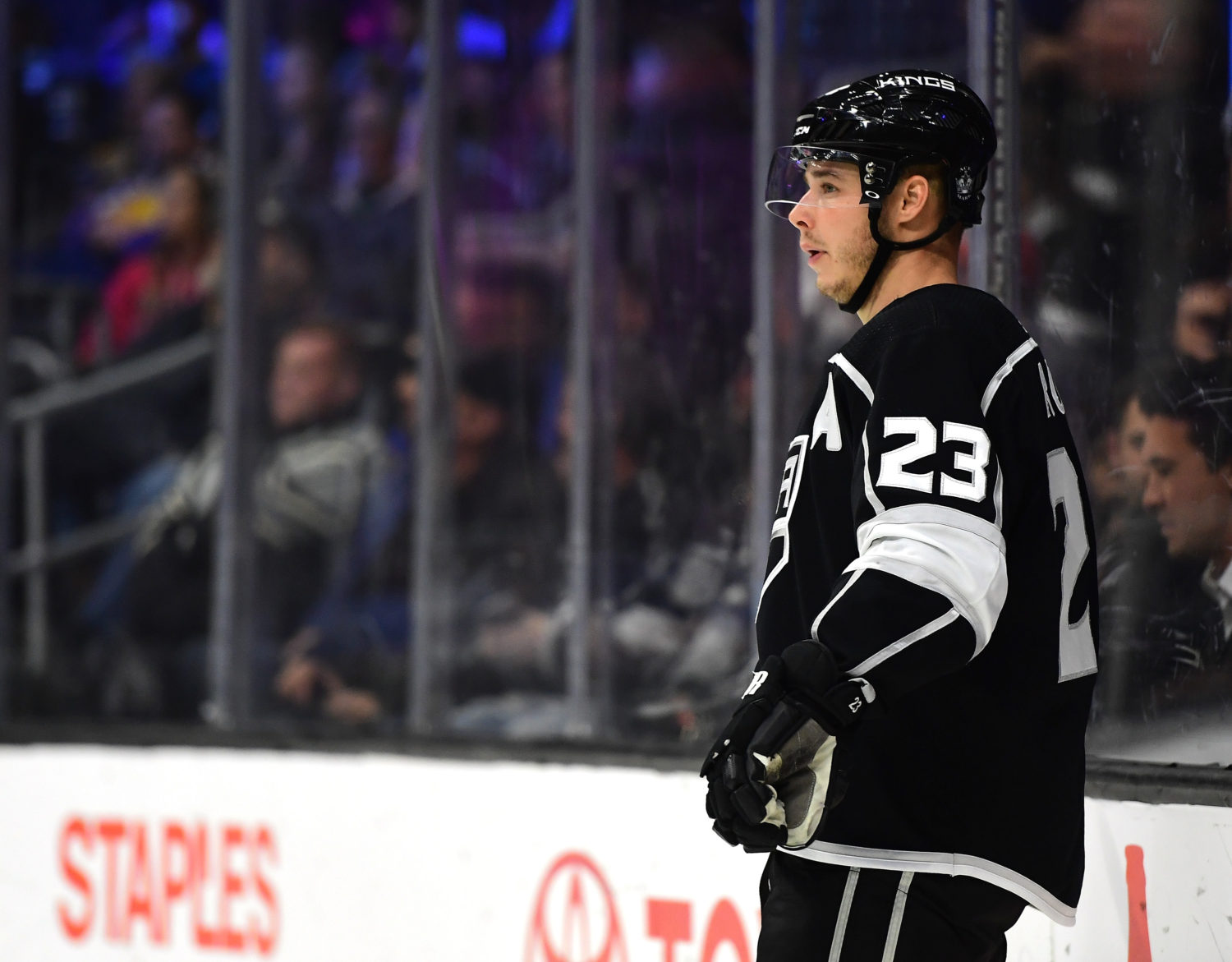 Good morning, Insiders. The Kings face the Golden Knights at 7:00 p.m. tonight (NBCSN / FUBO TV / KABC 790 / I Heart Radio) at Staples Center in the teams’ second meeting of the season. Vegas weathered an Anaheim barrage early last night before emerging with an impressive 4-1 road win in their first game out of the break. With a 9-0-1 record in their last 10 (and a 10-1-0 record versus the Pacific Division), they’ve jumped over Los Angeles to claim sole possession of first place in the Pacific Division.

-The vitals: Jonathan Quick left the ice first at the morning skate and is expected to start in goal. Jussi Jokinen and Oscar Fantenberg remained on the ice with Christian Folin and Darcy Kuemper, so they’re likely out tonight. Kyle Clifford, who would need to be activated from injured reserve in order to play, didn’t exactly linger. Expect a potential game-time decision between him and Andy Andreoff for that 4LW spot, though Andreoff took the first loop during line rushes. Folin took the ice in a red, no-contact jersey at the beginning of this morning’s skate and took a step towards his integration back into practices.

-Their vitals: Marc-Andre Fleury, who is 6-3-2 in his career against the Kings with a 2.03 goals-against average, a .936 save percentage and two shutouts, is expected to get the start in net. Via reports, no changes are expected for Vegas, who scratched defenseman Brad Hunt and recent waiver claim Ryan Carpenter, a forward, against Anaheim.

-Say, Jake Muzzin, what are the strengths of this Kings team? “Well, our team defense is obviously there, still,” he replied. “We take a lot of pride in our goals against and it helps when you have two good goalies playing for you. You know, our penalty kill has been good. As of late, we’ve slacked a little bit We’re taking too many, and we’ve had some unlucky bounces, I’m going to say, but those happen. I like our spirit and our competitiveness in here and most nights we come ready to work, so that’s a testament to the guys in the room and we’ve got to continue. We’re almost halfway done. We’ve got a stretch of games, breaks, stretch of games, breaks. So, we’ve got to look at these stretch of games as a mini playoff series or what have you, and pour in all-in on these next little stretches here.”

-Kevin Gravel could play his first NHL game since he earned an assist over 17:26 of work in the season-ending 4-3 overtime loss at Anaheim last April 9.

“If given the opportunity, it’ll be one to enjoy obviously,” he said.

That enjoyment isn’t the endgame for the 25-year-old who will compete to remain on the big club as Christian Folin recuperates from an upper-body injury. But it does represent a successful step forward in a debilitating off-season bout with Crohn’s disease, which placed him in a hospital and in doctors’ offices at the same time many of his peers were on the ice and in the gym. But, after putting in a heavy amount of work towards regaining his strength and conditioning, and building towards the type of game he wanted to play while with the Ontario Reign, there should be at least a millisecond of satisfaction in returning to the Kings before he refocuses on what he’ll have to do to help the team win and stake a claim to a more permanent roster spot.

“…A long time coming, but that being said, I’ve still got to be playing hockey,” he said. “It’s a great spot to be down in Ontario, but obviously want to be here. I kind of worked my way back here, so now I’ve just got to do whatever I can to make sure I can stick around. So, I’m, obviously very excited to be back here and just excited for the chance to hopefully get an opportunity.”

He showed last season that he’s plenty capable of using his stick to shut off gaps and defend the rush, and was adept at turning plays around in the other direction. With three minor penalties in 54 career games – Gravel actually has a rare positive penalty plus-minus for a defenseman – he stays out of the penalty box. There have also been pushes for him to become more firm in his play, which, despite some sheltered zone starts against softer competition in his first full season, he was able to demonstrate in 2016-17.

Of course, that becomes moot when he essentially had to both build back his strength and weight while also going through the usual repetitions in advance of the upcoming season.

“I kind of just wanted to get healthy and feeling good to begin with when it originally hit me, and once that happened, obviously I needed to get back into shape and get my strength back and all that and just kind of get comfortable back on the ice again,” he said. “And you know, throughout training camp and the little bit of the start of the season in Ontario, I was just pretty much working on getting back into and it and getting my legs back underneath me. So it wasn’t like it was … frustrating by any means. I mean, I had stuff I needed to work on. I was doing my best to try to work on that and getting back to where I needed to be. Like I said a few days ago, I feel good now and I feel comfortable and back to where I normally am.”

Along with Adrian Kempe, Nick Shore and Derek Forbort, he’s one of four active Kings who won the 2015 Calder Cup while a member of the Manchester Monarchs. Tonight, he’ll face a former teammate who lifted Frank Calder’s namesake trophy (and won the fastest skater and hardest shot skills competitions at that season’s All-Star Game) in Colin Miller, who has five goals and 19 points while appearing in all 35 games for Vegas. Gravel reconnected with Miller at Nic Dowd’s wedding last summer but understands that there’s so much to consider when countering a deep Vegas team in what would be his first game back with the Kings.

“Might as well just jump right into it, right? Obviously what Vegas has done so far this season has been pretty incredible,” he said. “They’ve got a great team and don’t look to be slowing down anytime soon. It’s a division matchup and it’ll be a fun one to play in, so it’s good. It’s exciting for the opportunity.”

-Dustin Brown will be honored prior to tonight’s game for playing his 1,000th NHL game last Thursday against Colorado. Barring any delays, NBCSN is scheduled to televise the ceremony, which will begin with Nick Nickson’s introduction at 7:09:15 p.m. Yes, we are down to the second here at LAK HQ. Remember, That Is Science.

Forgetting coloumbs for a moment, the presentation should take place between 7:09 and 7:17. Puck drop is scheduled for 7:20:30. As part of the celebration, Brown will be featured in special promotions between the Kings Care Foundation and the LA Kings Game-Used Equipment departments. All fans in attendance will receive a Limited Edition Dustin Brown 1000th Game Cheer Card. Taped videoboard testimonials will congratulate Brown on his career achievements. With 1,001 games under his belt, he ranks third to Dave Taylor (1,111 games) and Luc Robitaille (1,077 games) for the most games played in a Kings jersey.

Roughly five-to-10 minutes after the game’s conclusion there will be a special Holiday-themed on-ice pyrotechnic and laser/light show that will feature loud music and “a substantial amount of smoke.” In other words, it will be like a Pink Floyd concert. The show is 13 minutes long, similar to the live performances of many Pink Floyd songs.

–Tonight’s on-ice officials are referees Kelly Sutherland and Dan O’Rourke (a referee who worked the Kings’ Game 6 win over the Devils on June 11, 2012 and was honored last night for officiating his 1,000th career game) and linesmen Mark Shewchyk and Shane Heyer. Pia Toscano will sing the national anthem.

-That’s it for now, Insiders. There are several stories to come, including John Stevens quotes and a story on the acclimation process rookies undergo in their first full season. I’ll also join my friends at the NHL Network at 4:30 p.m. for a chat about the Kings’ second half needs, Kale Clague, the Golden Knights and much more. Let’s talk soon, Insiders.