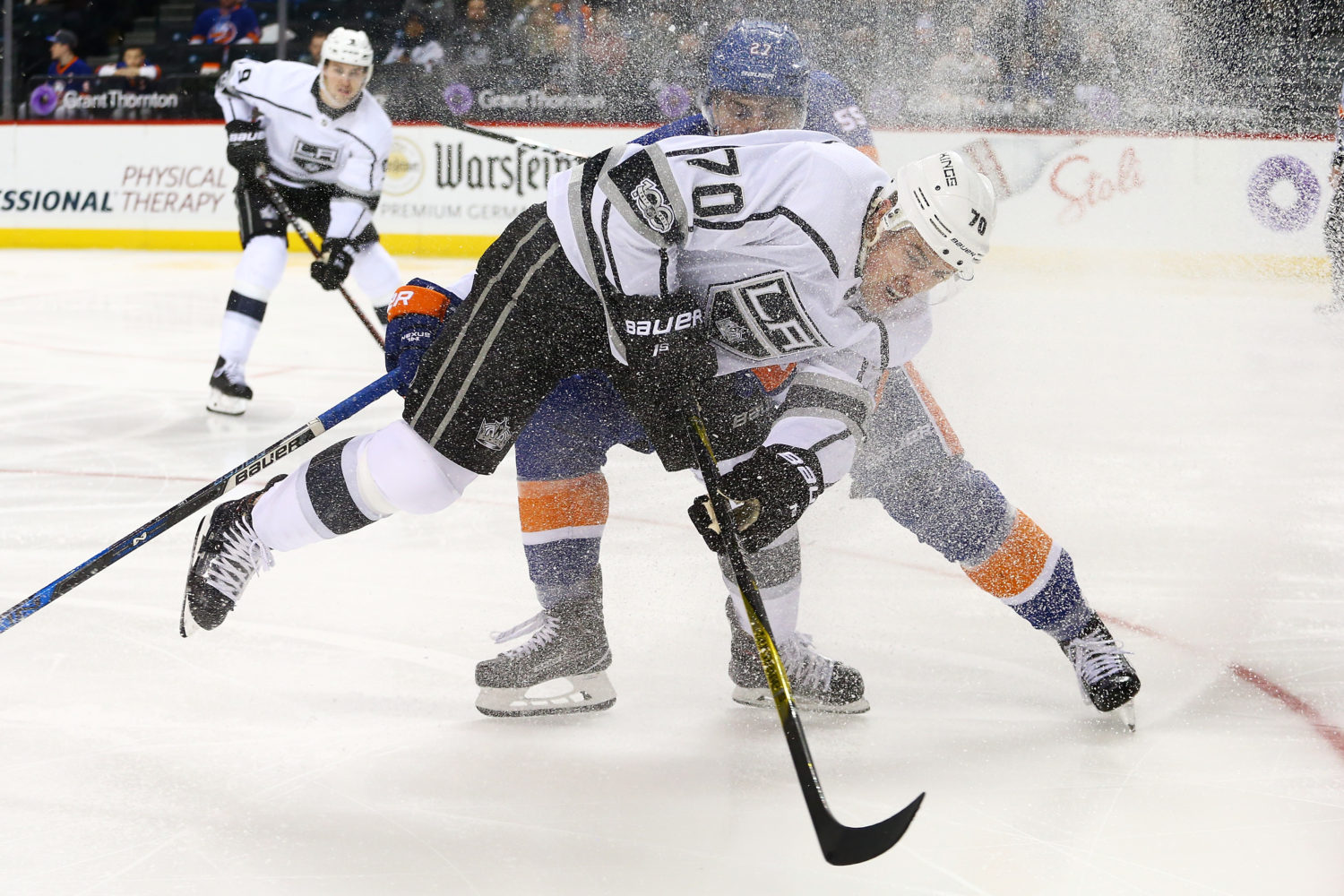 A very pleasant December 27 to you, Insiders. The Kings picked up where they left off prior to the Christmas break and took the ice shortly before 9:50 a.m. in advance of Thursday’s game against Vegas and a Saturday-Tuesday-Thursday Vancouver-Edmonton-Calgary swing. They aligned thusly:

-Kevin Gravel, who was assigned to Ontario on Sunday, was recalled and joined the team on the ice Wednesday morning. He hasn’t gotten into a game yet this season, but remains an option with Christian Folin (upper-body) not yet available. Folin took the ice late in the skate and got some work in by himself but will need a bit more time. “He’s just testing it out,” John Stevens said. “He’s going to try and keep his legs underneath him while he continues to [rehab]. He’s feeling better. Obviously he’s better than he was before the break, but he’s still got a ways to go.”

Team CAN D Kale Clague is likely to miss tonight’s game vs. SVK after blocking a shot with his right foot last night. X-rays negative, reportedly no fracture.

-Tanner Pearson, who has gone six straight games without a goal, enters the post-Christmas slate looking to improve an unforeseen valley in his personal marks. Pearson, who had 24 goals in 80 games last season, has totaled one overtime goal, one empty-net goal and four five-on-five goals in 37 games played in 2017-18.

This isn’t a brand new, boldfaced LAKI story; the north-south left wing has been in a little bit of a personal production rut this season. When speaking with both the player and coach earlier this year, it was made clear that the team feels that he’s at his best when he’s generating chances for himself and his line off his effective forechecking, and that he’s done “a lot of the yeoman’s work that leads to a lot of offense,” according to Stevens.

On the other hand, yes, he has been a key cog in the establishment of the impressive team-wide game, but he’s still stuck at six goals with a week and a half to play before the season’s halfway point. Is there satisfaction in his overall game, which also takes his cold, hard production into consideration?

“We’re not always going to judge his value in terms of his play on straight production points, just alike we haven’t done that with Alex [Iafallo]. Alex has played a terrific game for us where he doesn’t get points, but he’s critical to the success of the line and the team. I think Tanner can be like that, but he’s not a young guy anymore. He’s a veteran that we rely on for leadership and consistency.

It’s a question that gets asked when Pearson is moved alongside the Anze Kopitar-Dustin Brown duo, as was the case on Wednesday morning. But, lines change frequently, and while there is always a combination of criteria that influences lineup construction, Pearson’s personal production didn’t really factor into the thought process Stevens used in determining this current alignment.

“It’s got nothing to do with getting him going. It’s got everything getting just some balance in the lines,” Stevens said. “I guess you could say we’d put somebody [in a specific slot] to try and get him going, but Tanner’s a good player. I think Tanner could play with anybody in our lineup. He’s played well with Shoresy, he’s played well with Adrian, he’s played well with Kopi in the past. Obviously Jeff and Tanner have had really good chemistry even when Ty was hurt last year. He’s a good player. When he plays to his identity, I think you can put him anywhere. We just thought we’d give that a different look today just to see it. There have been match-ups where we’ve kind of looked at trying to change the make-up of that line, but we didn’t do that for specifically Tanner, we just did that to get a look at that.”

Pearson, whose 54.1% raw possession rate this season ranks second among active Kings, doesn’t appear to show any drop-off in his secondary metrics beyond shooting percentage, which has fallen from 12.8% last season to 7.5% this season. He’s still putting roughly the same number of shots on goal; those shots just aren’t going in this year. Frequent linemate Tyler Toffoli, who was either out or not quite 100% in the second half of the season last year, has 16 goals through 37 games and is likely impacting Pearson’s own personal output. In any matter, adjustments throughout a lineup are based on so much more than any individual rise or decrease in one player’s production.

“I do like sticking with pairs,” Stevens said. “It doesn’t always work, but it seems like familiarity and continuity [are important], especially when you get into special teams. Penalty kills, power plays – it’s hard sometimes on the power play if you’re trying to pull players from three different lines because somebody’s tired out there. That factors into it sometimes. But, we’ve gone on some really good stretches, and we’ve faltered off a little bit, so sometimes it’s just a matter of trying to find some consistencies at that particular time during the year.”

-Condolences to the family of former Toronto goalie Johnny Bower, who passed away at the age of 93 Tuesday after a short battle with pneumonia. I don’t recall the context of what put Darryl Sutter on the ice with Bower at a “training camp” – Bower also worked as an assistant and a goaltending coach with the Leafs – but in the 2012-13 season, during an afternoon in St. Louis in which Bill Ranford took the ice with the team, Sutter was asked about goaltenders, and it segued into a memory he had of a golden-aged Bower. (Stick tap to DTLAKingsFan for the find.)

On Bill Ranford playing goal at practice:
He wasn’t as good as the other guy. Just based on what we were talking about – you get points for goals? (Reporter: He got a lot of points?) You’re sharp. You know what? I kept going to ask him if he’s getting hot because you’re worried about heating. I wasn’t interested in giving him mouth-to-mouth. He looks good, though. Quick and I were standing there after watching, and it’s funny how the game’s changed and the style, the goalies, how they play, right? But he looks good. Hey, he was a top goalie, though. Look at Khabibulin last night. He was 40, and he was awesome. He literally stood on his head last night. He made great saves. Breakaways. Good to see that.

On why goaltenders tend to remain effective as they advance in age:
I don’t know. Probably most of them play less. The most [those] guys play [in] a regular season is probably around 70 games, maybe. I don’t know. It’s a good question. (Reporter: How old was Rogie when he retired?) I think about St. Louis – Glenn [Hall] and Jacques [Plante] were their first two goalies after expansion. They were both in their 40’s, and Glenn was still looked on as a premier goaltender. They were their two goalies. (Reporter: How old was Johnny Bower when he came up?) I was in training camp with Johnny Bower. I kind of forgot who he was – it was a guy with a helmet and the wires, right? And I was going ‘OK, who is he?’ I knew it was because his style, but I couldn’t figure out who it was. And then I took his helmet, and it was ‘Johnny Bower.’ He was like my grampa. He was probably 50. (Reporter: So, in a pinch, we’re saying that Ranford could play a game?) Nobody said that. (Reporter: OK, I don’t know where I got that.) (Reporter: Ranford didn’t say it.) Hey, St. Louis is carrying three goalies. We could say we are, too.

-If you’re into some pre-scouting, Vegas plays tonight in Anaheim, and Malcolm Subban is expected to draw the start. (Ryan Kesler will draw back in for Anaheim, for what it’s worth.) Expect the Kings to face Marc-Andre Fleury when the Golden Knights make their first ever Staples Center visit tomorrow evening (7:00 p.m. / NBCSN / KABC 790 / I Heart Radio) for the celebration of Dustin Brown’s 1,000 games played.